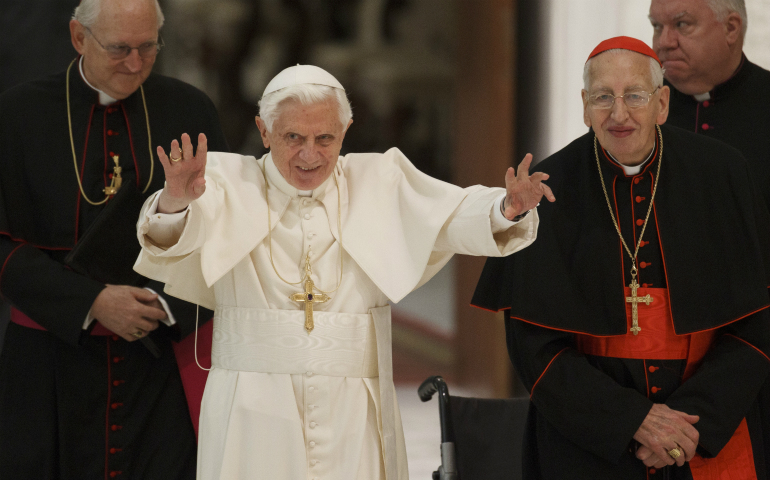 Irish Cardinal Desmond Connell, the retired archbishop of Dublin, died Feb. 21 at the age of 90.

A philosopher and strong defender of traditional Catholic values, including regarding divorce, contraception and abortion, Connell's accomplishments during his 16 years as head of the Archdiocese of Dublin were overshadowed by the church's sluggish pace in coming to terms with the scope and devastation of clerical sexual abuse scandals.

During a Holy Thursday Mass, about two weeks before his retirement was announced in 2004, Connell asked for forgiveness from those he offended, especially those abused by priests.

"I ask pardon of all whom I have offended, especially of those who suffered unspeakable abuse by priests of the diocese and experienced a lack of the care that ought to have been provided," said the cardinal, who was 78 at the time.

"I can only hope that the steps now taken will ensure that the future will see no repetition of what happened in the past," he said at the time.

More than five years later, in November 2009, a report was released by the independent Commission of Investigation, headed by Judge Yvonne Murphy, looking specifically at the handling of some 325 abuse claims in the Archdiocese of Dublin during the period from January 1975 to May 2004. Connell had become archbishop in 1988.

"The Dublin Archdiocese's preoccupations in dealing with cases of child sexual abuse, at least until the mid-1990s, were the maintenance of secrecy, the avoidance of scandal, the protection of the reputation of the church and the preservation of its assets," said the report. "All other considerations, including the welfare of children and justice for victims, were subordinated to these priorities."

The report said then-Archbishop Connell was "slow to recognize the seriousness of the situation when he took over in 1988. He was over-reliant on advice from other people, including his auxiliary bishops and legal and medical experts. He was clearly personally appalled by the abuse but it took him some time to realize that it could not be dealt with by keeping it secret and protecting priests from the normal civil processes."

Desmond Connell was born in Dublin March 24, 1926. Before entering Clonliffe College, Dublin's diocesan seminary, he was educated by the Jesuits at Belvedere College. After his ordination in 1951, he continued his studies, earning a doctorate in philosophy before becoming a lecturer in the Department of Metaphysics at University College, Dublin.

By 1988, when St. John Paul II named him archbishop of Dublin, he was professor of general metaphysics and dean of the philosophy faculty, well-known in academic and theological circles. As archbishop, he worked hard to clear the diocesan debt and to build new schools and parishes in response to the rapid population growth in the greater Dublin area.

Connell's death leaves the College of Cardinals with 225 members, 118 of whom are under the age of 80 and therefore eligible to vote in a conclave.