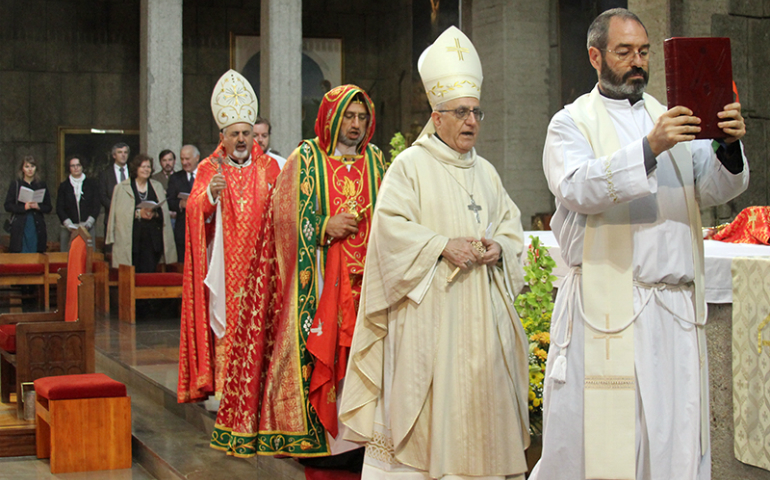 Iraqi Christians who are considering leaving the country should stay put and play a role in rebuilding their war-shattered homeland, a senior prelate said in Paris.

"For me, staying and resisting as a Christian minority is the right way," Chaldean Archbishop Yousif Mirkis of Kirkuk told reporters during a visit to France to raise awareness and funds for an interfaith educational project he oversees.

While the Iraqi conflict is far from over — a battle is now raging in the strategic city of Mosul, although government forces have gained ground against Islamic State militants — Mirkis focused many of his remarks on how to heal his deeply divided country.

He called for nothing short of a Marshall Plan for Iraq, referring to the American initiative to aid Western Europe after the devastation of World War II.

The Chaldean Church is based in Baghdad and represents Catholics from Iraq and neighboring countries.

Mirkis also expressed a wish that an "Iraqi Mandela" could bring peace to a divided Iraq, referring to the South African leader who brought an end to apartheid. The archbishop said he worried about the future of youngsters growing up under Islamic State rule.

"What do we do with the millions who have been educated under it?" he asked.

His visit comes as many European countries, including France, have toughened their immigration policies and are building walls against the flood of asylum seekers fleeing impoverished and conflict-torn countries.

Refugees are often disappointed, Mirkis said, finding their families scattered among different countries and disenchanted by their new lives.

"The effort and money spent to integrate these immigrants — if we spent it at home, it would have been a thousand times better," Mirkis told reporters in Paris, calling for private investments rather than those that would shore up a “monstrously corrupt” state economy.

Iraq’s Christian population has plummeted from about 1.5 million in 2003 to less than 300,000 last year, according to the Alliance Defending Freedom, a Vienna-based advocacy group. Some fear they may disappear altogether.

But Mirkis is not among them.

In Kirkuk, he oversees a project helping several hundred university students — Christians, Yazidis and Muslims — study and live together, as a sort of test-tube case for interfaith reconciliation.

He described another: the widow of a Japanese reporter who was kidnapped and killed in Fallujah who funded the building of a hospital in the city.

"Instead of seeking revenge, she built a hospital and offered it to those who killed her husband," he said. "There's a lesson that should be repeated."