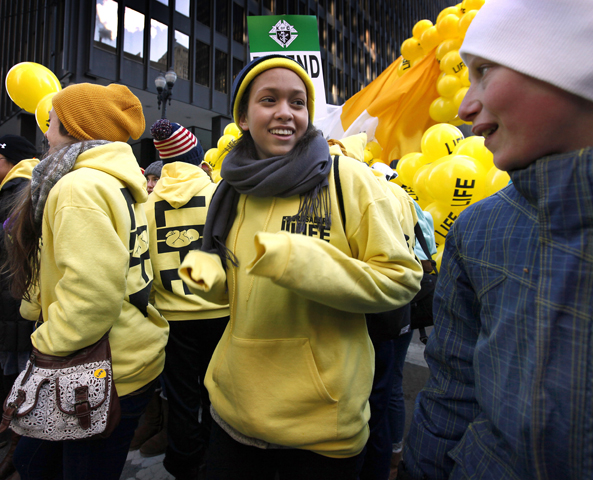 Dana Mentgen donned six layers of clothing and made the trek downtown to Chicago's Federal Plaza Jan. 17 because he felt it was important to witness for life against the "culture of death."

"I think the majority of people are pro-life. It's just that we've been silent too long. We have to speak out," said Mentgen, a parishioner at St. Raphael the Archangel Parish in Old Mill Creek.

Because of the extreme cold, organizers condensed the speaker portion of the event.

Those who turned out for the march carried signs with pro-life messages in English and Spanish and listened to speakers including Chicago Archbishop Blase J. Cupich; the Rev. Corey Brooks, pastor of New Beginnings Church of Chicago; and abortion survivor Melissa Ohden.

"No child should be told that there is no room for them. The womb should not be the child's tomb," Cupich told the crowd. "We just celebrated Christmas, the season that features the birth of a child, a season of new life and new beginning. A child, like no one else, creates and fosters hope in our world. We need to make room for the child just as we need the hope a child brings. What we do today is about making room for hope in our world."

Ohden shared how she was aborted and left to soak in a burning saline solution for five days -- a process intended to kill her. Her mother was forced to undergo the abortion against her will. Ohden called for support for women who feel forced to have abortions and said pro-lifers aren't just "pro-baby" but "pro-women."

Once again, youth from St. John Cantius' Crusaders for Christ brought their trademark yellow "LIFE" balloons and drumline to the event. The noticeable group of young people wearing yellow sweatshirts with the word "life" printed on the back walked to Federal Plaza from St. Ignatius College Prep, where they participated in a morning rally and Mass for youth sponsored by the Archdiocese of Chicago's Respect Life Office. About 200 young people attended the event, a first for the pro-life office.

A new addition to the Crusaders this year was a yellow Chevrolet Super Sport Roadster owned by Markie and Steven Works from St. Peter Parish in Volo. The truck matched the yellow balloons with black magnets spelling out the world "life" on the trunk and doors.

After hearing the speakers, participants marched through the Loop past City Hall and the James R. Thompson Center, which houses state offices. Organizers said the route was intended to represent the three levels of government being urged to restrict abortion: federal, state and municipal.

It was the first Chicago March for Life for Jane Wytaniec, who attends Mass at Marytown in Libertyville. She participated in a pre-march Mass and brunch benefiting Aid for Women, a non-profit that offers counseling and housing for pregnant women. That event was one of several Masses and events held around the city that day, which was associated with the march.

"All my life I wanted to be involved in this but for some reason it hadn't occurred until now," Wytaniec told the Catholic New World, Chicago's archdiocesan newspaper. "I am more than elated to be here. It is humbling. I praise God that he brought me here."