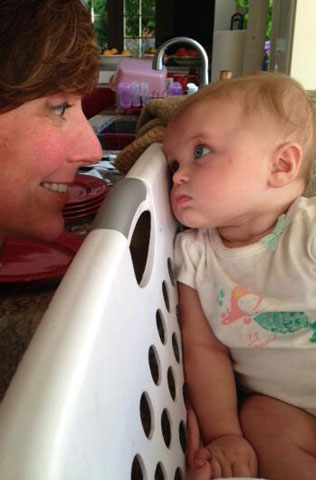 On March 20, my daughter, Chelsea (28), and her husband Matthew (31), welcomed a beautiful baby girl, Mary Elizabeth, into the world. I am so proud to watch Chelsea and Matt adapt to the crazy, terrifying, joyful adventure of parenting, otherwise known as How to Keep a Short Person Alive, Whether They Like It or Not.

Mary was delivered by emergency C-section almost a month early. For the first couple of months, Chelsea and Matt were almost exclusively focused on just fattening up Mary's wee body. Happily, Mary has steadily thrived, going from a little over 4 pounds when she came home, to a noisy, hearty, demanding 14 pounds, and growing.

Now that the panic and exhaustion are abating, Chelsea has started "shopping" for a church near their home in Bellingham, Wash., in which to have Mary baptized or christened. Chelsea is also looking for a place where Mary can go to preschool -- which Chelsea wants to include introduction to the Spanish language -- and hopefully elementary school, as well.

After researching all the available options, Chelsea recently reported that she is leaning toward St. Paul's, their local Episcopal church. She said this is because the Episcopal church's views and teachings are more in line with her own opinions on issues such as female clergy, gay clergy, and same-sex marriage. Plus, they offer preschool Spanish.

If you read my recent article about our adult disabled son Nick's first Communion (NCR, May 22-June 4), you may remember that I am a cradle Catholic, with 16 years of Catholic education.

Chelsea told me that one of her very first thoughts on learning that she was pregnant was: "Oh my goodness, I have to get back to church!"

This reaction was both surprising and soothing to me. Going to Nick's first Communion Mass was the first time Chelsea had been in a church for a very long time. The fact that returning to church was one of her first, knee-jerk reactions to the realization of becoming a mother reverberated through me, straight back to my Italian Catholic grandmother, my Nonna.

Everyone who knows me is keenly aware that my world has been rocked by Mary's birth. I have been proud and honored to be called Grandma by Dan's seven grandchildren, but Mary is my daughter's daughter. Mary made me a Nonna.

This fills me with great joy, because my Nonna was everything to me. She was my role model, my friend, my cheerleader. She showed me how to be firm and fair with kids, how to lay out an awe-inspiring buffet, how to use savory meals to provide support and comfort to people, and how, if at all possible, to always choose the sparkly dress.

We wrote letters to each other in Italian once a week, until the last two weeks before she died in December 2000. I adored her, and have missed her daily for nearly 15 years.

When Chelsea announced her probable choice of St. Paul's Episcopal Church, my feelings were instantly and deeply mixed. I am delighted that she wants Mary to go to church -- any church -- so that she will have the framework to get to know God, and a community around her to support that relationship. I am a great admirer of the Episcopal organization.

But the Nonna on my shoulder -- and in my head and heart and gut -- had her hands on her hips, asking, "So, what is wrong with the Catholic church?!"

It occurs to me that being Catholic was never something I chose. It is something I am, like being Irish and Italian, like having brown eyes and dark hair, like building my life around food and family. Being Catholic is in my DNA.

I never decided to be baptized, go to Catholic school, go to confession, go to Communion, get confirmed. It was who we were. It was what we all did. And my Nonna was watching. Always watching, and occasionally commenting.

When I was 18, Nonna pulled me aside, and with great seriousness, told me: "Why should the farmer buy the cow, when he gets the milk for free?" She was not kidding. When I got married, that white dress was supposed to mean something. And so for me, it did. Nonna was there, watching.

Before our marriage ceremony could begin, my kids' dad, Mike, and I were required to sign a form that promised we would never use birth control. Fr. McDonald just winked and told us to "cross our fingers" as we signed. So, we did.

I didn't have even the slightest twinge of guilt about that moment. It was what we Catholics did. If the church's teachings were not perfectly in sync with our modern reality, well, whatcha gonna do? Fudging it over was just what you did, what we all did. There was no dilemma. We weren't going to leave or anything. We were lifers. We had Nonnas, always watching.

I never questioned that moment until the day of Chelsea's confirmation, 17 years later. I was confirmation sponsor for her best friend, Mary Christie, and Chelsea's friend Heidi's mom was Chelsea's sponsor. We had all been through the preparation classes together. We all had new dresses, and Mary's Cuban Catholic grandmother, Beeky, was in the background -- in lieu of my Nonna -- always watching.

The morning of the ceremony, Chelsea burst through our front door in tears. In between her sobs, I made out what had happened.

Chelsea was devastated. She had read the form and just stared at the pastor. She told him she could not possibly keep all those promises. She was at that time dating a boy who was not Catholic. She said she was only 15 years old, had no idea whom she would marry, or what her life would be like then. The pastor had smiled and told her to just to cross her fingers when she signed.

She pushed the paper back at the pastor, put her head down, and walked home.

It broke her heart, but I had never been more proud of my daughter. And I felt pretty darn good about myself for a moment, too. I had raised a young woman who was straight and true and clear.

Suddenly, I realized that I had not been any of those things. I had crossed my fingers. I had fudged it over. Like most Catholics of my generation, I often felt at odds with the tenets of the Roman Catholic church, but I just rolled with it.

Unlike the Los Angeles of my youth, Washington state is not predominantly Catholic. Since I moved here in 1989, many Christian friends who knew of my liberal views would ask me, "How can you disagree with the pope and still be Catholic?"

My glib reply had long been: "Well, I didn't vote for this president, but I am still an American."

But that was a dishonest analogy, a slide away from that very good question. The Catholic church is not a democracy. We don't vote for the pope. We don't have a say in the official rules and dogma, about what is considered OK to ask about, and what is infallible.

I had never answered that good question. Until that moment, I never thought I had to.

Now, here, my beautiful, smart, brave daughter had done something very hard. Something I had never even thought to do. She refused to lie.

That evening, after the ceremony, we had dinner at a local Mexican restaurant with Mary's family. I was uncomfortably aware that Mary's grandmother Beeky was giving me the stink eye. Finally, when she apparently could stand it no longer, Beeky pointed at me and said, "Mala madre. Mala madre."

Mary's mother, Isabel, reached over and pulled Beeky's pointed finger down to her lap, but Beeky continued, under her breath, "Mala madre."

Because in her Catholic world, and my Nonna's, and mine up to that moment, my duty was clear. Beeky believed I should have forced Chelsea to be confirmed. To compel her to suck it up, cross her fingers, sign the paper, and get on with it. Like a good Catholic.

When Chelsea asked me if I would accompany her to St. Paul's Episcopal Church -- to decide if it was the right place for Mary -- there it was again. Bad mother. Proud mother.

But this time, I know my answer. I'm going to stick with proud mother.

Chelsea is shopping for a church for all the right reasons. She wants my involvement, maybe even my advice, because she loves me. She might be a little afraid of my reactions -- I am her mother, after all -- but she needs her relationship with God to be clear and clean. And she will do her best to start Mary on that same path. And then Mary can choose.

I will continue to be Catholic. I may not agree with all of the Vatican's rules, but I genuinely love Pope Francis, the ritual of Mass, the music, spaghetti dinners, rummage sales, and the ongoing work of Jesus that Catholic Charities does every day. I will die a Catholic, because that is who I am.

As for my daughter and her daughter? Well, I am Mary's Nonna now. If you want at them, you gotta get through me first. I am and forever will be that fierce, loving, slightly scary lady in the background, always watching.

If Chelsea or Mary do choose the Catholic church, that will be their choice. And what can I say? I would be delighted. I'm a Nonna.

Until then, it looks like we three ladies are checking out St. Paul's. I understand Sacred Heart Roman Catholic Church is just down the street. We just may stop by there, as well.

A version of this story appeared in the Oct 23-Nov 5, 2015 print issue under the headline: Church Trek: The Next Generation.