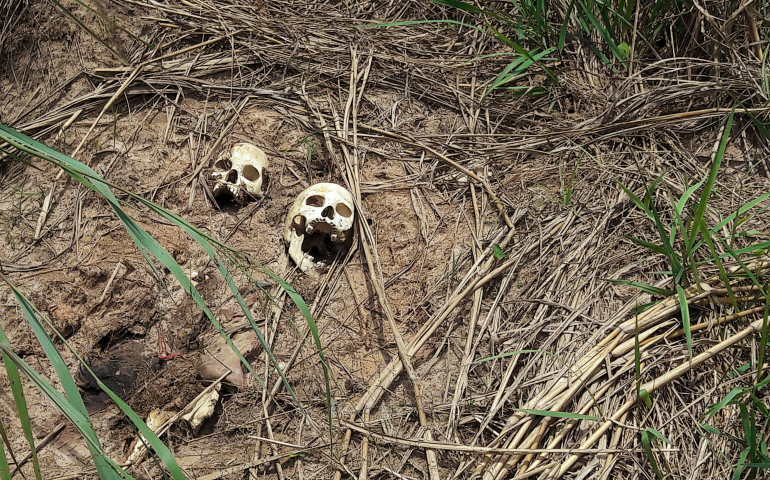 Human skulls suspected to belong to victims of a recent fight between the Congolese army and Kamuina Nsapu militia are seen March 12 on the roadside near Kananga, Congo. (CNS/Aaron Ross, Reuters)

Catholic bishops in Congo have abandoned attempts to arrange a government-opposition power-sharing agreement, amid rising violence.

Archbishop Marcel Utembi Tapa of Kisangani, the bishops' conference president, said the latest round of political negotiations were not satisfying the Congolese people. He said bishops had continued working with both sides until March 27, but that all parties were pulling back from a consensus on issues previously agreed upon.

"This lack of sincere political will did not allow for an agreement," the archbishop said at a March 28 news conference.

"We are therefore bringing the political impasse in these discussions to national and international attention — as well as the lack of political goodwill and the incapacity of the political and social actors to find a compromise."

Utembi said the bishops believed power-sharing negotiations, which followed a Dec. 31 church-brokered peace accord, were now "in a state of failure." He added that the politicians involved had failed to prioritize the nation or the people's welfare.

"The bishops' conference cannot mediate endlessly. It will now be up to President (Joseph) Kabila to find quick ways to implement agreement on a national unity government that can lead the country to presidential and parliamentary elections."

The bishops' conference launched a mediation bid after opposition leaders accused Kabila of seeking to retain power after the Dec. 20 expiration of his second and final term.

Under the Dec. 31 accord, the president was to remain in office pending elections by the end of 2017, alongside a government headed by an opposition-nominated prime minister, but it also had to comply with constitutional provisions barring him from a third term.

However, press reports said the accord's implementation had been left in doubt since the Feb. 1 death of opposition leader Etienne Tshisekedi, who was to have headed a 28-member National Transition Council.