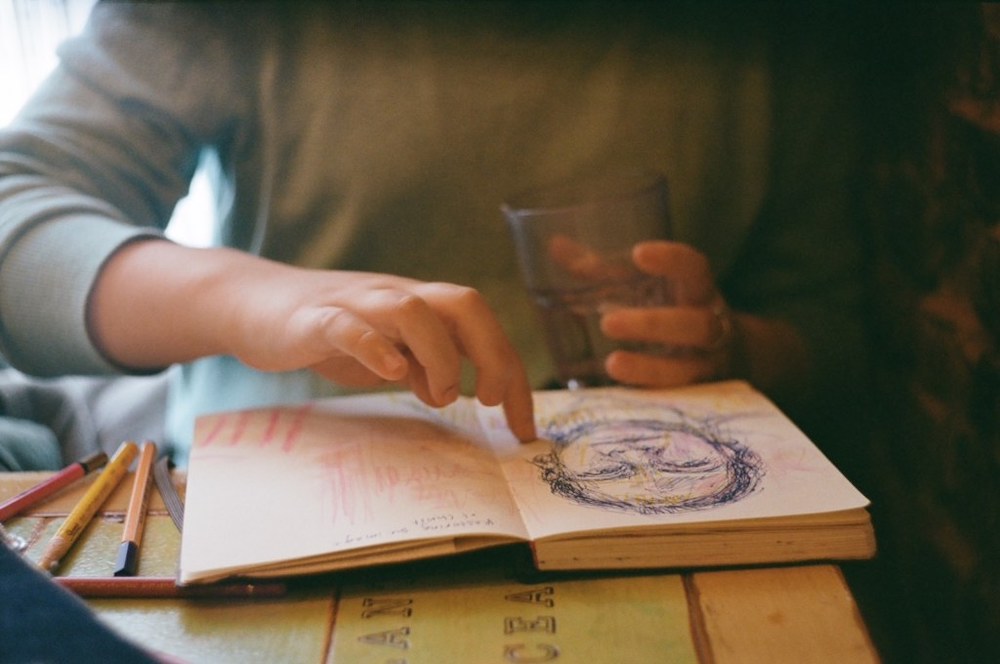 New York City-based artist Erin McAtee began her creative journey with a desire to "see more deeply into the human experience." Starting in her early days studying under her mentor in college and continuing with a residency at the archdiocesan arts center and work with homeless ministries, McAtee makes artwork that revolves around her craving for intimacy and encounter with others.

She recounted the formative experience she had in Dave Johnson's classes while in college. "Dave was informal — not loose — but really cared about what he was teaching. People often put their focus into needing to make drawings look perfect, as opposed to focusing on the process of drawing as a whole," she said.

Johnson trained her in a technique known as observational drawing, which begins the process of drawing from life. This includes looking at still life, landscapes and people. She said she learned "how to empathize with the model and pay attention to the way they are posing. I often end up taking the pose that the model is taking as I draw. From there, the drawing starts to take on a life of its own." 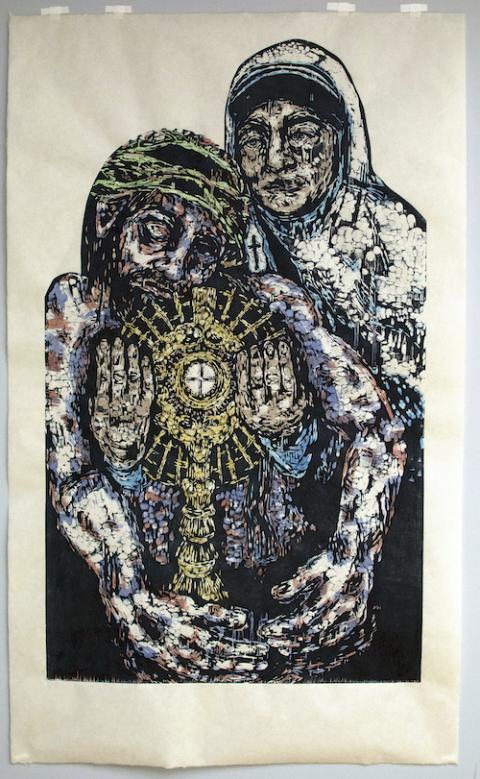 She said Dave taught her by example and that he "taught me to look at the people I'm drawing. I discovered drawing to be a place of encounter. It was no longer just a sterile thing."

McAtee's relationship with Johnson was one of many that formed her artistic sensibility during her college years. She spent much of her time with students at her school's Newman Center, the Catholic organization that hosts opportunities for fellowship, prayer and cultural enrichment.

McAtee was born and raised Catholic but says she took her faith for granted.

"In the beginning, I was living the 'college life,' not caring much for my own dignity or that of others. At that point, I was really feeling like a shell of a person, filling myself with empty things and experiences. But I still put on a 'church face' when I was with students at the Newman Center."

She eventually came to realize that her vain pursuits weren't so empty after all. "I was ultimately attempting to fill my heart with all those things," she said. Driving those pursuits was the hunger for something greater.

McAtee soon started to notice the correlation between the emptiness within her heart and her craving for beauty in her art. But it wasn't until a friend at the Newman Center invited her to explore her faith more intentionally that she started connecting the dots.

"There was this pivotal moment during the summer between my freshman and sophomore years when I started to take prayer seriously, especially to Mary. I also started to take my relationships with my female friends more seriously," she said.

This commitment to prayer life and to communal bonding helped her to leave behind the things that she used to use to distract herself from her inner sense of emptiness.

As she continued her studies, she felt a growing desire to share her faith experience with her peers in the art department. "I wondered how I could share what's going on in my heart without shoving Jesus down their throats, or resorting to saccharine, cheeky religious art that no one would care about. And soon, my professors started to see that my faith wasn't just some superficial thing … it was rooted in a real lived experience. They encouraged me to look deeper into my experience of faith and to explore other artists who had this same desire."

Even after rediscovering her faith in God, McAtee continued to struggle with facing her own interior poverty. She realized how much she still needed to tear off some of the bandages that she had used to cover over her neediness, and that she wouldn't be able to do so alone. This is part of what attracted her to spending time with religious communities in New York that ministered to people who are homeless.

She found that spending time with both people who voluntarily lived a vow of poverty and people who suffered from involuntary poverty helped her to become more comfortable in facing her own wounds. McAtee's work with the Missionaries of Charity (Mother Teresa's nuns), the Sisters of Life and the Franciscan Friars of the Renewal has given her a space to further explore her artistry, spiritual questions, and desire to be close to those who are made poor.

Through a Franciscan brother in Newark, New Jersey, McAtee met a homeless woman who had lived on the street for four years, struggling with addictions to heroin and cocaine, and living in a toxic relationship with her boyfriend, who also used drugs. After her boyfriend severely beat her, she left him and ended up in front of the Franciscans' friary.

The brother who assisted her provided her spiritual accompaniment and helped her enter rehab. He had been telling her about McAtee, and she asked if McAtee could come and draw a portrait of her before beginning rehab.

"She really wanted me to draw her. I went to New Jersey with two pieces of paper, one for her to keep and another for me. She sat for me as if she had modeled a million times before. She received me looking at her as I recorded her likeness on paper," McAtee said.

Their time together was interspersed with moments of silence and of conversation. "I noticed how natural it was for her to make eye contact with me. She wasn't afraid of glancing at the drawing and smiling at her likeness on the paper," she said. "So many people are uncomfortable with being looked at. We've all been looked at by gazes who don't wish us good … by people who have harmed us."

Considering how badly the woman had been treated, McAtee was surprised by how vulnerable she was willing to be with her, in part because she had developed a bond of mutual trust with the Franciscan brother.

The experience helped McAtee reflect on how she receives the way others look at her and taught her to "receive well," she said.

"When I'm being held in someone else's gaze, are they looking at me and seeing I am good? Do they look at me with love or malice? Can I trust them?"

McAtee's work as an artist is part of her "perpetual journey to discover what this gaze means, and to look at people with a purified lens … to look at people like God does as a father." Her art has helped her to begin cultivating this "pure gaze" toward herself and toward others.

McAtee commented that our culture can at times make it difficult for us to cultivate that kind of gaze. "I think a big issue is indifference. Actor Jim Caviezel once said that it's the biggest sin of the 21st century … especially in Manhattan. We struggle with making eye contact with, and even acknowledging, the poor. Everyone has formed this culture of: 'I'm gonna pretend this person is not here because I don't have time for this,' " she said.

It's so much easier to stand in solidarity with the poor from a distance — perhaps by dropping money into a beggar's cup or supporting policies that advocate for their rights — rather than to look at them face to face, she said. "We need to ask ourselves, 'How do I respond in my heart initially to these people?' After that step, invite God into all of it. It takes a lot of humility … humility is recognizing the truth of who we really are … It takes vulnerability to be in front of a person and to establish an actual connection with them.

"When I'm sketching someone, my subject takes a risk in allowing me to look at her, and she trusts that I'm looking at her with love, and that I'm not looking to take advantage or exploit her. I can't hold anything back when I'm sketching a portrait because then the final product will look reserved, or like I was looking at her in a distorted way. I can't afford not to give my all to the person in front of me." 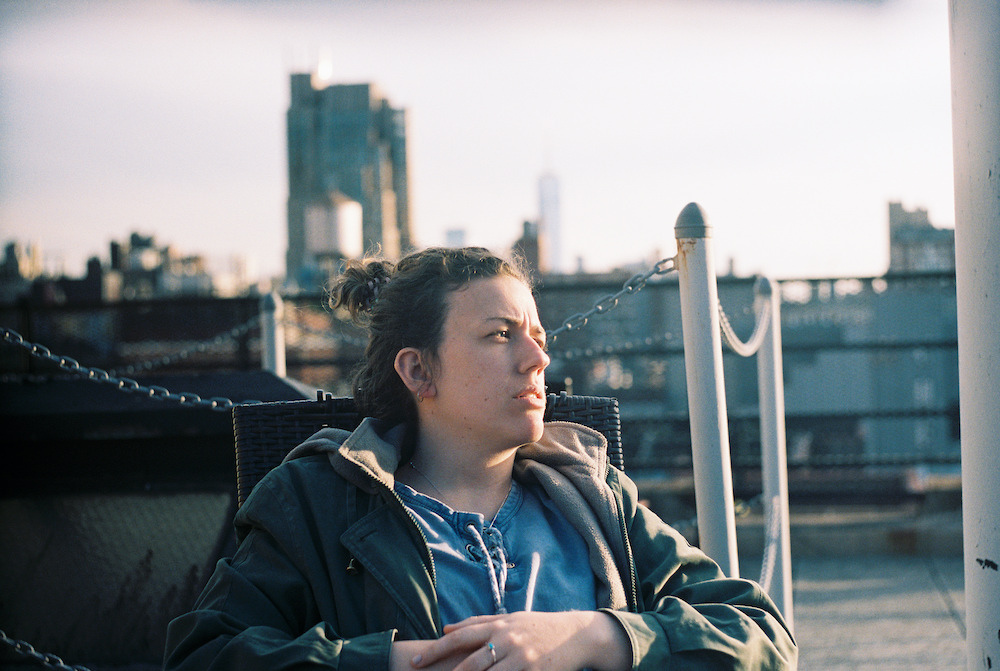