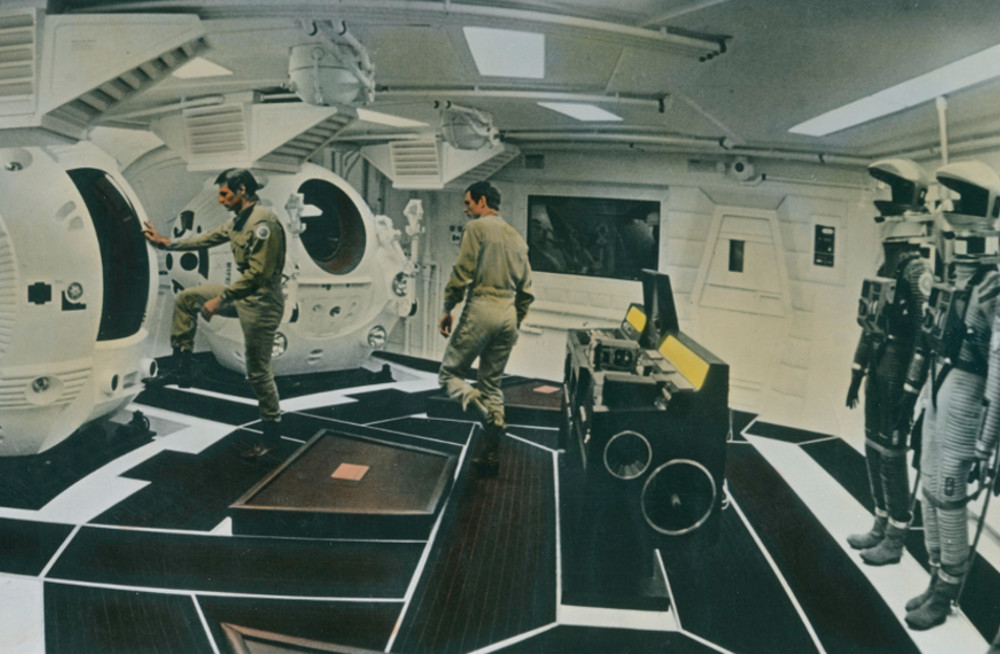 A scene from the film "2001: A Space Odyssey," directed by Stanley Kubrick (Newscom/akg-images)

I first saw Stanley Kubrick and Arthur C. Clarke's "2001: A Space Odyssey" shortly after the dawning of the year 2001. A cosmic alignment, it would seem, but that's just about the only alignment there was, cosmic or otherwise. Nothing could have been more misaligned than my viewing setup — VHS format, a small tube television set, unforgiving acoustics, and all in my cramped studio apartment, for a film whose aperture covers the vast universe and beyond. Yet I had never gotten over that first viewing experience, leading me to watch the film multiple times in the span of 17 years, each time, a journey to the edge of mystery and awe.

It's not difficult to understand my anticipation when one day in the spring, I was queuing up at Chicago's heritage film palace Music Box to attend a special screening of "2001: A Space Odyssey" in its original 70mm version, the way audiences viewed the film in 1968.

In time for the celebration of the film's 50th anniversary, filmmaker Christopher Nolan ("The Dark Knight," "Interstellar," among others) took over a long-drawn Warner Bros. project to "un-restore" negatives derived from the film's original 70mm reel, cleaning it up, undoing previous repairs, and making color and sound correction sans digital manipulation. The noble goal was to bring the film back to its original form as Kubrick conceived it.

With special effects created from sheer meticulous design, engineering and photochemical strategies, "2001: A Space Odyssey" is a testament, not to CGI, to which all of today's sci-fi films are indebted, but to the astonishing vision and talent of a film auteur of the first order. Even after half a century, the film looks breathtaking in all its analog glory. The non-digital restoration process had preserved the film's soul, working only to maintain that elusive quality that Nolan aptly calls "emotional information." Perhaps a helpful, if partial, analogy would be listening to John Coltrane in the warm, richly textured sound of a vinyl record; there is no conflation between quality and digital sharpness. Authenticity is at stake.

Aside from the cinematic magic, Kubrick was committed to keeping his representation of space technology within the realm of scientific believability, consulting noted scientists for the design of the various spacecraft in the film. The rotating Space Station V, for instance, was based on schematics by aerospace engineer Wernher von Braun, who envisioned a station that rotates on its own axis, like a giant Ferris wheel, to simulate gravity.

While we know now that "2001: A Space Odyssey" was an overly optimistic prediction of the technological advancement in the actual year 2001, a number of design details are on point. For one, the chairbacks of the Pan Am space plane that takes Dr. Heywood Floyd (William Sylvester) to the space station are fitted with individual viewing screens, a normal feature on commercial planes today. Then there's the sequence when Dr. Floyd greets his daughter "happy birthday" via videophone in real time, hardly future tech now for us weaned on Skype and FaceTime.

Thematically, "2001: A Space Odyssey" fuels debate about the human impact of science and technology on fast forward, an all-too-relevant issue in our present cyber age. In the film, computers have not only been programmed to be foolproof, but also have advanced to a semi-autonomous existence; this is emblematized by the character HAL 9000 (Heuristically programmed ALgorithmic computer), the onboard artificial intelligence controlling the functions of Jupiter-bound Discovery 1. Depicted as a red camera lens located at key spots in the ship, HAL is endowed with human qualities such as facial and speech recognition, conversational skills and, unnervingly, a certain degree of emotional intelligence.

Even as I write, Chinese and American researchers have already developed the technology to send hidden commands undetectable to the human ear that can activate the AI on our devices just by playing music on the radio. Intelligent personal assistants such as Apple's Siri and Amazon's Alexa can download information, send text messages and make calls and purchases, sometimes mistakenly, and sometimes without our consent.

In the film, HAL decides to exterminate the ship's human crew, discrediting the computer's supposed "foolproof" programming. Here, Kubrick puts a clause on overconfident human attempts to "play God," presaging the opinion of the world's best minds such as Bill Gates and the late Stephen Hawking, who had warned that messing with AI is like calling forth a demon; it could seriously threaten the human race.

In the mystifying end sequence of "2001: A Space Odyssey," Dave Bowman (Keir Dullea) enters a wormhole, a theoretical space-time passage popularly known in the Kubrick universe as Star Gate, and comes into contact with the enigmatic alien monolith. Almost instantaneously, he goes through a process of evolution, ultimately launching back to Earth as a Star Child, a luminous fetus with big, knowing eyes.

Thematically, "2001: A Space Odyssey" fuels debate about the human impact of science and technology on fast forward, an all-too-relevant issue in our present cyber age.

A film of such symbolic and visceral power as "2001" invites various interpretations, like a prism you can turn at different angles, each revealing a new facet. I've always seen Bowman's journey as a symbolic narrative of humanity's quest for renewal and definitive wholeness, which, theologically speaking, unfolds in a marriage between human striving and the supreme will of the God of "continuing creation."

In Robert Zemeckis' 1997 film "Contact," which drew much inspiration from Kubrick's masterpiece, astronomer Dr. Ellie Arroway (Jodi Foster) describes her intergalactic encounter with extraterrestrial intelligence as "a vision of the universe that tells us, undeniably, how tiny and insignificant, and how rare and precious we all are … that we belong to something greater than ourselves. … I wish that everyone, if even for one moment, could feel that awe and humility, and the hope."

Following my own star-gate moment viewing "2001: A Space Odyssey" on the big screen, this too continues to be my wish.

[Precious Blood Br. Antonio D. Sison is associate professor of systematic theology at Catholic Theological Union, Chicago, and author of the book The Sacred Foodways of Film (Pickwick, 2016). "2001: A Space Odyssey" is available on DVD and video streaming from Warner Bros.]

A version of this story appeared in the Aug 24-Sept 6, 2018 print issue under the headline: Awe, humility, hope await in 'A Space Odyssey'.