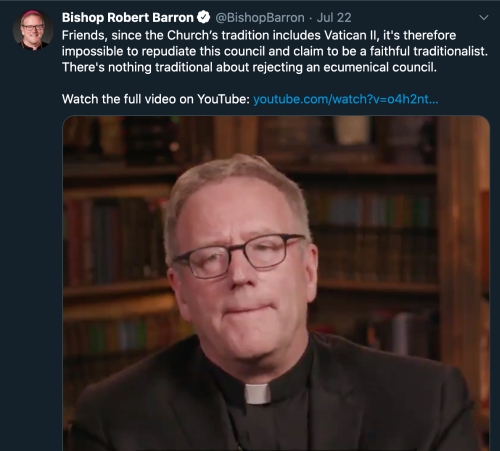 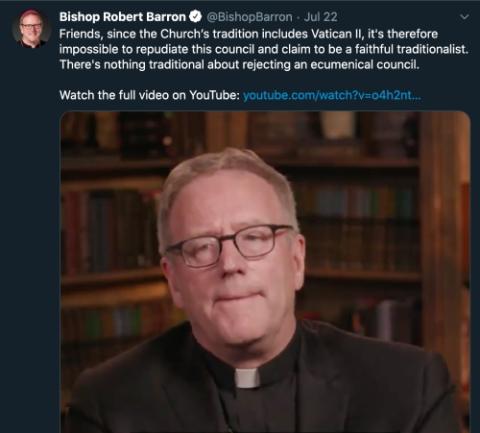 The private meeting took place July 29 via Zoom and was confirmed to NCR by Brandon Vogt, content director for Word on Fire Catholic Ministries.

Vogt said that the meeting was initiated at his suggestion and had a threefold purpose, to discuss:

"All of these are major pastoral issues, which is why I proposed to Bishop Barron, in his capacity as bishop, to host a meeting with various Catholic media leaders to discuss these items," said Vogt.

Barron is the founder of Word on Fire and an auxiliary bishop in Los Angeles. In recent weeks, he has used his sizable social media presence to call out the "armies of commenters" fueled by "internet provocateurs" who have attacked him on Twitter following an article he published regarding the respective roles of the bishop and the laity.

"May I, as a spiritual father, issue a kind of pastoral cry of the heart to my fellow Catholics who practice this sort of thing?" he asked in a video posted July 7.

Barron dubbed the attacks "mean-spirited" and "unjust" and said that he preferred the online pushback he received from debating the new atheists in the early days of his online ministry to that of the "Twitter mobs" of certain Catholics today. He said that he had three full-time staff members spend their workdays deleting the recent inappropriate comments leveled at him.

In another video posted on July 22, he criticized certain traditionalists who have rejected the Second Vatican Council.

"For me, it's impossible to repudiate Vatican II and claim to be a traditionalist," he said.

Vogt said the meeting of Catholic media professionals discussed the online behavior of traditionalists who "ruthlessly criticize the pope and bishops, and question the authority of the Second Vatican Council, often to the point of repudiation."

While neither Barron nor Vogt specifically identified individuals or organizations responsible for targeted online attacks, much of the criticism directed at Barron has been fueled by fringe right-wing sites such as LifeSiteNews and Church Militant.

This is not the first time that Barron has puzzled over how to control the fractured nature of online Catholic commentary.

In an interview with National Catholic Register earlier this year, he suggested that bishops may want to consider introducing "something like a mandatum for those who claim to teach the Catholic faith online, whereby a bishop affirms that the person is teaching within the full communion of the Church."

NCR has confirmed that representatives of America Media, Catholic News Agency, Catholic News Service, Crux and Our Sunday Visitor were present on the call.

In an Aug. 3 email, Vogt told NCR that the meeting was conducted off-the-record "to facilitate free and transparent dialogue."

"It was not a press conference and no formal statements were composed (or even discussed)," he wrote.

Vogt said the meeting was not hosted in coordination with the Communications Committee of the U.S. bishops nor with the Committee on Evangelization and Catechesis, of which Barron is the chair.

"This was simply a bishop having a pastoral discussion with Catholic leaders in the media, in his capacity as shepherd of souls," said Vogt.

A version of this story appeared in the Aug 21-Sept 3, 2020 print issue under the headline: Bishop Barron hosts invite-only meeting to discuss 'rad trads'.