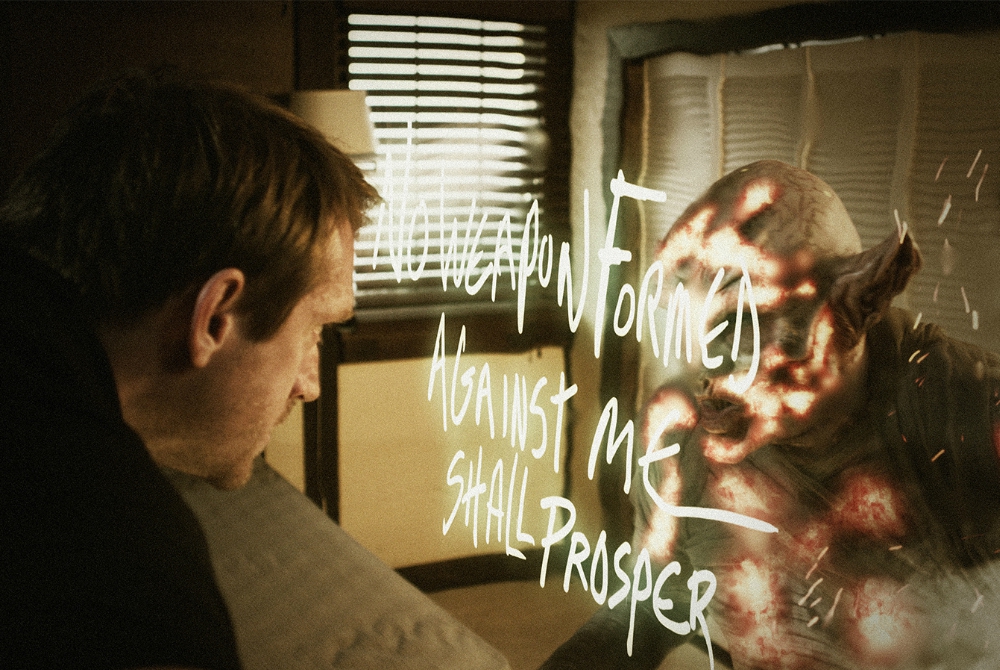 Mark Taylor encounters a demon during a dream sequence scene in the film "The Trump Prophecy." (RNS/Courtesy of Micah Johnson, director of photography)

Mark Taylor is sure he knows why Donald Trump became president.

In 2011, while watching an interview with Trump on TV, Taylor says he heard a voice saying, "The Spirit of God says I've chosen this man, Donald Trump, for such a time as this."

And the Almighty is just getting started, said Taylor, a former firefighter who has published 23 "prophetic words," many about Trump's presidency.

The presidential prediction is detailed in "The Trump Prophecy," a new film produced with the help of faculty and students at Liberty University — some of whom later rejected its message — that will be shown in some 1,200 theaters on Oct. 2 and 4.

The film is part of a small but influential "Trump prophecy" movement that proclaims the current administration is divinely ordained and condemns its critics as servants of Satan.

A number of high-profile evangelical and charismatic leaders — among them evangelist Franklin Graham, Baptist preacher Robert Jeffress, pollster George Barna and presidential adviser and televangelist Paula White — have claimed that God intervened in 2016 to ensure the election of Trump.

The prophecy movement goes a step further to claim Trump is a modern-day King Cyrus, a pagan king who came to the aid of God's people and rescued them from exile.

In October 2016 Wallnau claimed God told him that "Donald Trump is a wrecking ball to the spirit of political correctness" and predicted Trump would become president.

Wallnau, who appears in Taylor's film, said the election is part of a larger religious revival that is "healing the land."

But he warns viewers not to sit back and relax.

"Believers have got to get their act together if they want to preserve their way of life," said Wallnau in the film. He declined to be interviewed.

The group recently called for an around-the-clock vigil for Supreme Court nominee Brett Kavanaugh. In announcing the vigil, Amedia repeated a prophecy from 2016 that claims Trump will appoint three new justices to the high court.

Taylor, whose grandfather and great-grandfather were Baptist preachers, said he began receiving prophecies after retiring from the Orlando Fire Department because of health concerns. As the film details, Taylor struggled with depression, insomnia, symptoms of post-traumatic stress disorder, and suicidal thoughts. During that time, he claims to have received visitations from demons, angels and even God himself.

Other prophecies followed, he has said.

In a scene that's re-enacted in the film, Taylor shared his "prophetic words" with Mary Colbert, an author and activist, and she affirmed her belief in their divine origin.

"This is good," she tells Taylor after studying them. "It has that rhythm to it when the Holy Spirit is bearing witness to the truth. At least it does to me. I think you have to let the whole world know about this."

In the film, Colbert transforms Taylor's words into a national movement by organizing a phone prayer network that attracted as many as 100,000 callers.

Asked about the specific role God played in the 2016 election, Taylor first gave the caveat that he is not a preacher or theologian. Then he gave his explanation for Trump's victory.

"The army of God stood up and repented on behalf of the land, and God healed the land and performed a miracle on Nov. 8," he told Religion News Service.

Taylor calls himself a "prophetic voice," not a prophet. Scholars say he and others like him differ from biblical prophets they have studied. Those prophets, the scholars say, often critiqued leaders of the day.

"You usually find biblical prophets speaking truth to power," said John Fea, professor of history at Messiah College in Pennsylvania, and author of "Believe Me: The Evangelical Road to Donald Trump."

"The prophet Nathan condemned King David's sin with Bathsheba. Nathan would never say what Trump's court prophets have said: 'I am going to give you a mulligan for this sin because you are going to appoint pro-life Supreme Court justices.'"

Brad Christerson, professor of sociology at Biola University in Los Angeles, agrees. Christerson, co-author of "The Rise of Network Christianity: How Independent Leaders Are Changing the Religious Landscape," studies the growing movement of charismatic Christian leaders who describe themselves as apostles and prophets.

Some, like Taylor, focus on predictions, not social critique, he said.

"The prophets in the Bible focused primarily on critiquing those in power and revealing how they have fallen short of living up to God's standards, especially in their treatment of the most vulnerable people in society," said Christerson. "These modern-day prophets seem to be doing something quite different — using their predictions of the future to rally support for a person in power of dubious moral character."

Taylor's Trump prophecy was just the beginning. His 22 other "prophetic words," all available on his website, mirror his political ideology and key planks of Trumpism:

The landmark 1973 Supreme Court decision on abortion in Roe v. Wade will be overturned.

The "most important midterm elections in American history" will lead to a "red tsunami" that will help Republicans strengthen their hold over both the House of Representatives and the Senate.

Taylor said Trump will launch "a wave of arrests against thousands of corrupt officials, many of whom are part of a massive satanic pedophile ring."

Then, military tribunals that will "make Nuremberg look like a cakewalk" will prosecute and lock up thousands of treasonous Americans, including former President Obama and other members of his administration, former presidential candidate Hillary Clinton and fired FBI Director James Comey.

Taylor claims this process has already started but the news media, which he called "the enemy of the United States," is "not giving people the truth."

Taylor, who said he has been "a Christian conservative most of my life," has few ties to organized religion. He has not been part of a church for years, and he condemns churches for seeking tax-exempt status from the government.

"Ninety-five percent of our churches [are in] a covenant with the kingdom of darkness," he has said.

Producer Rick Eldridge of ReelWorks Studios, which made the film, has a longtime interest in prophecy. His last Christian film was "Four Blood Moons," which claimed astronomical events are "God's billboard" for prophesied changes in the Middle East and the world.

Eldridge said his Trump film, which features talking heads commenting on how Trump is making America — and Israel — great again, has a different purpose.

He wants to get people in theaters to "see a film that will reignite patriotism and call people to pray for our country and leadership."

ReelWorks tried to buy ads on Facebook, but the social media company rejected them, reportedly saying the ads were too political. Eldridge maintains that the film is about prayer, not politics, and has accused Facebook of "censoring" the ads.

Eldridge also said the film is being promoted to churches and faith groups through a "30 days of prayer" campaign, sample sermons and other materials. Tickets for the film can be ordered on Fathomevents.com.

"Mark Taylor claims to have received prophecies directly from God that do not align with the Bible's message," reads the petition. "Mark Taylor has claimed God told him that electing Trump will save the world which is unbiblical at best and heretical at worst."

Radio host, author and Bible scholar Michael Brown has said he believes God had a hand in Trump's becoming president. But that doesn't mean that opposing Trump is going against God's will, Brown said.

Brown, a charismatic leader who took part in the Brownsville revival of the 1990s, has a more nuanced view of the Trump presidency.

"Not all opposition to the president is satanic or conspiratorial," said Brown, author of the upcoming book "Donald Trump Is Not My Savior: An Evangelical Leader Speaks His Mind About the Man He Supports as President."

"I do believe God raised Trump up to be president," said Brown, "but I believe it is important to speak the truth to him with respect and honor, recognizing that while he does much good, he also does much harm. I call for his evangelical supporters to function as Trump's 'loyal opposition.'"

As for Taylor's prophecies, Brown urges caution. He advises his fellow Christians to follow the advice found in the New Testament's 1 John 4:1: "Dear friends, do not believe every spirit, but test the spirits to see whether they are from God, because many false prophets have gone out into the world."

"Perhaps the Lord used Mark Taylor to prophesy the Trump presidency," Brown said, "but that does not mean all current and future prophecies are also accurate. Each must be tested. Thankfully, we can test the prophecy about the 'red tsunami' in the midterms in the weeks ahead."