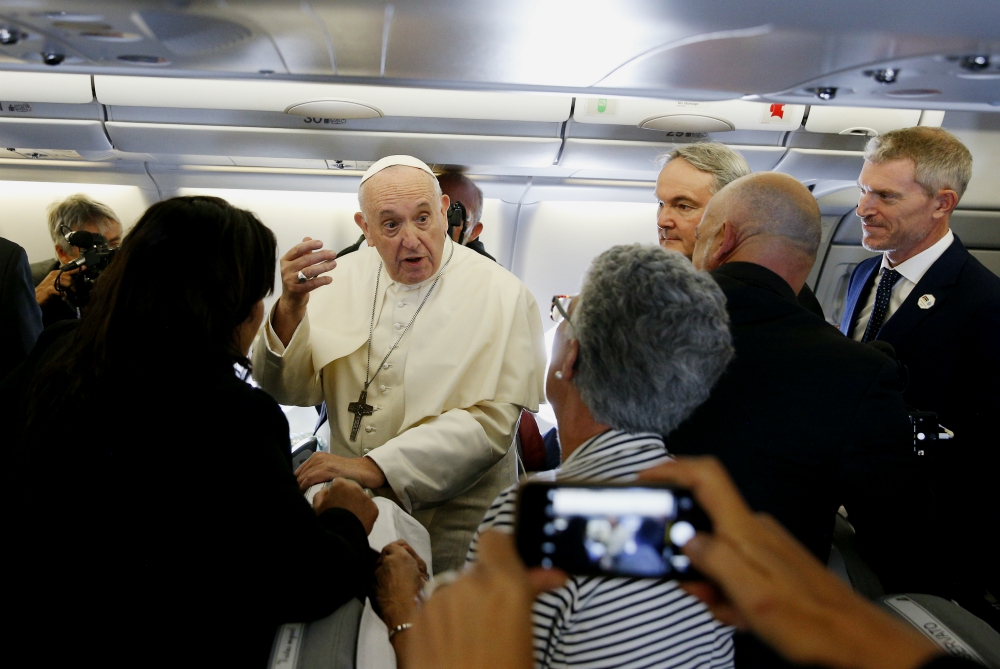 Throughout his papacy, Pope Francis has welcomed dialogue that has led to often candid assessments from clergy and papal advisers about the path he is charting for the Catholic Church.

Whether that's been discussions during the recent Synod of Bishops on the Amazon about the possibility of allowing married clergy or his handling of the clergy sexual abuse crisis around the world, the pope has not backed down from hearing people out — the good and the bad.

In some segments of the modern-day media, however, the emerging dialogue has been portrayed as a church reeling in conflict.

Further, some outspoken church observers have angrily criticized the pope as misguided in his ways and even as an "apostate."

Disagreeing with the pope is fine, Catholic communication professionals told Catholic News Service as 2019 drew to a close. What concerns them is how disagreement is expressed because it creates uncertainty among Catholics in the pews.

The professionals voiced particular concern for "the megaphone" of social media and its no-holds-barred comments and opinions that in the not-too-distant past would have stayed in the classroom or the rectory or an occasional journal.

"We are in a place where people use social media really as a bully pulpit," said Helen Osman, president of Signis, an international association of lay Catholic communication professionals. "The conversations I've had with fellow Catholic communicators is people are worried about how social media are being used to create disunity or divisiveness. ... It does give the perception that we are a church internally in tension and maybe even in division."

Kim Daniels, associate director of the Initiative on Catholic Social Thought and Public Life at Georgetown University and a consultant to the Vatican's Dicastery for Communications, finds the level of disparaging disagreement unfortunate.

"Instead of a family of faith, we sound like political partisans, and too often we let that drive our faith rather than the other way around," she told CNS.

While David Gibson, director of the Center on Religion and Culture at Fordham University, described the number of papal critics as "much smaller than we think," he said they are well-organized and well-placed to create a stir.

"They [are] influential in many cases because they have connections in powerful places in the Vatican, in universities and in media," he said.

The vitriol and at times misleading and even false statements from critics have not escaped the pope's attention. At least three times in 2019, Francis took the opportunity to advise journalists, urging them to "unmask" destructive news, guard against reporting "fake news" and to undertake their important work with humility in the search for truth.

"At a time when many spread fake news, humility keeps you from peddling food spoiled by disinformation and invites you to offer the good bread of truth," the pope told the Foreign Press Association of Italy May 18. "The humble journalist is a free journalist, free from pressures, free from biases."

Aboard the papal flight from Madagascar to Rome Sept. 10, the pope told reporters that while the future of the news media is unknown, it will have no future if reporters and the public cannot distinguish between facts and fiction.

Less than two weeks later, he met with Italian Catholic Union of the Press members at the Vatican, urging them to "unmask words that are false and destructive" and to ensure that their sources are credible while offering the correct context, interpretation and importance of events.

U.S. bishops making their ad limina visits to Rome in recent weeks have dismissed attempts by some media commenters and church observers to promote a wide divide between them and the pope.

"Some people, and it's a small group of people, are focusing in on him in these horrible attacks," said Bishop Richard Stika of Knoxville, Tennessee, one of 37 bishops who met with the pope Dec. 3. He charged that the pope's detractors hide behind Twitter accounts, "affiliated with the church sometimes, and they spew out this opinion that is hate-filled."

Milwaukee Archbishop Jerome Listecki told a CNS reporter in Rome it would be impossible for church leaders to "come together to move forward" if every issue being discussed is seen to be polarizing because of differing thoughts.

"Open and frank discussions and occasionally proper ... criticism, not attacks, but criticism, are healthy for the church," he said. "Then ... this is the dialogue that moves forward. My sense is that this is what Pope Francis wants to do. He wants that open dialogue and he welcomes it. But in welcoming it, there's others who are going to interpret that as polarization."

While the pope repeatedly has addressed the role of journalists in covering the church, social media pose new challenges because it can be disruptive, explained Jesuit Fr. Paul Soukup, professor of communication at Santa Clara University.

"What sells is more the first-pounding views and what's going to get attention," he said.

Soukup compared the widening usage of social media to a nonnative species of animal or plant that disrupts an ecosystem. He pointed to other disruptive forces in history, such as the development of the printing press that allowed for the widespread distribution of Martin Luther's "95 Theses" in the 16th century and the growth of daily newspapers in the mid-19th century.

"We are dealing with a new communication form. We haven't developed rules for it. It's disrupting politics the same way," Soukup said of social media.

In response to the disruption, the communicators contacted by CNS all suggested the faithful in the pews step back for a moment when reviewing critical comments about the pope and consider who is making them before outright accepting them as the truth.

"The response is to look outward, not inward, to focus on what we are called to do, our mission to the poor and sharing the joy of the Gospel, rather than focusing on these conversations," Daniels said.

For Gibson, the answer is rooted simply in being Catholic "and the idea that we should not hate each other."

"Then let's move on using basic Catholic tradition and practices and virtues of discourse, the idea that there is a common good."