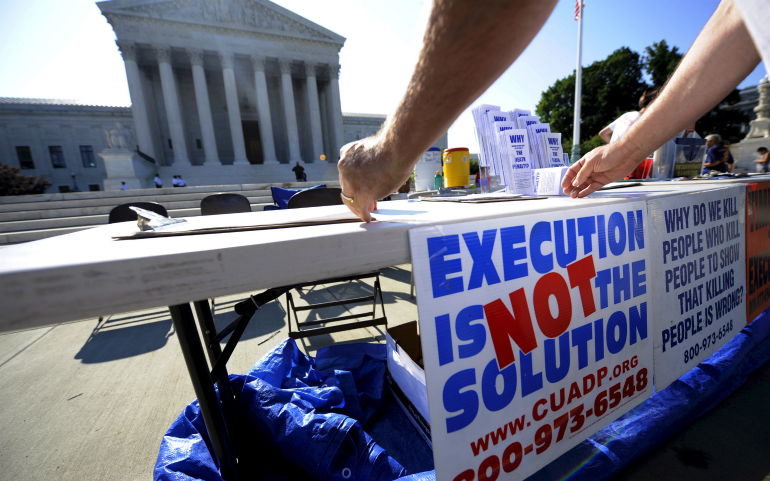 A member of the Abolition Action Committee hangs a sign in front of the Supreme Court in Washington during a 2008 vigil to abolish the death penalty. (CNS photo/Shawn Thew, EPA)

Ricky Javon Gray, who is scheduled for execution in Virginia next month for the 2006 murder of two children, has filed a motion to stay his execution based on the Eighth Amendment ban on cruel and unusual punishment.

While one part of Gray’s legal defense team is preparing a clemency appeal to Virginia’s governor, another is preparing to challenge the lethal injection drugs slated to be used during Gray’s execution.

Gray’s attorneys filed a motion Dec. 16 asking a federal district judge to stay his execution, stating that the drugs used in the execution pose "grave risks of pain and suffering that violate the Constitution," according to attorney Lisa J. Fried, who represents Gray in the lethal injection lawsuit.

The drug "midazolam has failed to adequately anesthetize prisoners during executions in Alabama, Arizona, Ohio and Oklahoma. It is clear that midazolam is not an appropriate drug for executions," Fried said, according to The Washington Post. The defense team is also questioning the Virginia Department of Corrections' substituting a compounded version of midazolam, which Gray’s attorneys say is not approved by the Food and Drug Administration and increases the risks of harm.

Midazolam — a sedative — was the drug responsible for the botched execution of Ronald Bert Smith Jr. earlier this month in Alabama. According to reports from ABC News, "Smith heaved and coughed repeatedly, clenching his fists and raising his head at the beginning of the execution."

Along with Smith, at least three other executions — Dennis McGuire in Ohio, Clayton Lockett in Oklahoma, and Joseph Wood in Arizona — that used the drug faced significant issues when trying to sedate the inmates. The drug was central to a Supreme Court case which ultimately ruled 5-4 that use of midazolam did not violate Oklahoma death row inmate Richard Glossip's Eighth Amendment right.

Gray's attorneys argue that not only has the drug been used in several botched executions, but that this is the first time a compounded version of midazolam will be used for an execution.

Gray's attorneys expressed concern in the motion regarding the compounding pharmacies and their practices.

"…compounding pharmacies typically follow an unregulated recipe that attempts to approximate the highly-regulated process used to manufacture drugs approved by the FDA. The finished product is intended to replicate a variation of — but is not the same as — any FDA-approved manufactured drug that goes by the same name. This method for producing drugs adds enormous risk that the resulting drugs will be ineffective, sub-potent, expired or contaminated, or that they will contain unintended additives or a substantial level of particulates," the motion stated.

Earlier this year, Virginia passed a law that allows the compounding pharmacies that supply the execution drugs to remain secret. The law was introduced as a way to combat the increasing difficulties states faced in obtaining the injection drugs, according to The Washington Post.

According to the Richmond Times-Dispatch on Dec. 19, a federal judge agreed to set a hearing for the motion on Jan. 3. The hearing will occur two weeks before Gray’s scheduled execution on Jan. 18.

Another defense team is working on an appeal asking Virginia Gov. Terry McAulifee to commute Gray’s sentence to life in prison. According to Rob Lee of Virginia Capital Representation Resource Center, the petition is based on "evidence [that] should have been presented to the jurors deciding whether to sentence Gray to death."

Lee said in a statement to NCR that the evidence "sheds light on Gray’s behavior, and provides an understanding of — though not an excuse for — of why he committed his tragic crimes with Ray Dandridge."

The petition will include evidence that "Gray was under the influence of powerful drugs, including psychosis-generating PCP, at the time of the crimes. Gray was introduced to the drug as a child, and became addicted as a way to try to block out the effects of the physical and sexual abuse he suffered for years at the hands of his family members," according to a statement issued by Lee’s office.

The statement adds that Gray has apologized for the crimes "and has always been remorseful for the senseless pain and suffering he and Dandridge caused."

Joining the appeals for clemency will be the Virginia Catholic Conference. "In Virginia, the Governor has the authority to commute death sentences to life in prison. We ask Governor McAuliffe to exercise this authority in Ricky Gray's case, just as we make this appeal in every instance when an execution is scheduled in Virginia," the conference’s executive director Jeff Caruso told NCR in a statement.

"We also express deep sorrow for the loss of the victims and pray for their loved ones who mourn them," Caruso said.

Gray was tried and convicted of murdering seven people in 2006, including the Harvey family. Gray was given the death penalty for the murders of Stella, 9, and Ruby Harvey, 4. Ray Dandridge, Gray's nephew, who was also tried for the murders, received a life sentence without parole in return for pleading guilty to the charges.

Gray's past and his drug abuse came up frequently during the trial. FOX News reported that during the trial, Gray admitted that he become addicted to drugs as a teenager and was sexually abused as a child.

Gray's execution had been set for last March but was called off due to the Department of Corrections not having enough drugs required for the execution. In October, The U.S. Supreme Court denied a rehearing of Gray’s case in October.

Virginia has executed 111 people since 1976, according to the Death Penalty Information Center. The Virginia Catholic Conference states that Virginia number of people executed the third largest number of people in the U.S., behind only Texas and Oklahoma.

NCR Editorials calling for abolition of the death penalty