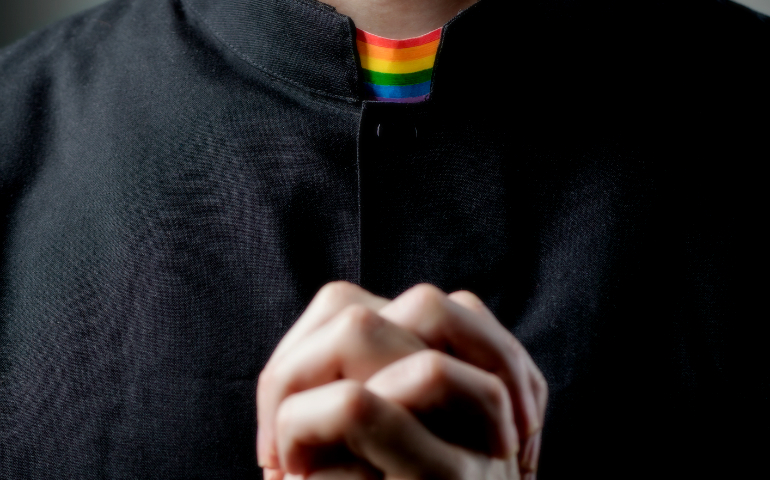 Since the publication of the Vatican Congregation for the Clergy's "The Gift of the Priestly Vocation" a few weeks ago, most commentators have noted that the document reaffirms a 2005 ban on the ordination of gay men. Yet Fr. Louis Cameli, a priest in Chicago, wrote an article in L'Osservatore Romano, the Vatican newspaper, on Dec. 18 in which he says the Vatican document does not issue a blanket ban on gay men being ordained.

In his article, which can be found in an English translation here, Cameli says he believes that the text's language is nuanced and needs interpretation. I believe the problem with the Vatican document is that the language is not nuanced, but sloppy, and thus, dangerous. The problem is not one of subtlety: The authors use terms that are incorrect or that have vague definitions.

For Cameli, the key language from the 2005 document, which is quoted in this latest text, reads:

Cameli argues that of the three criteria mentioned — practicing homosexuality, possessing deep-seated homosexual tendencies, supporting "gay culture" — the first and third are clear-cut, with the second one needing some deeper interpretation.

As for the first, Cameli notes that since celibacy is required of priests, sexual activity is not permitted. But the text does not speak of sexual activity but of men who "practice homosexuality."

What does it mean to "practice homosexuality"? Obviously, the Vatican and Cameli are using this term to mean sexual activity. They do not realize that "homosexuality" refers to many more characteristics than sexual activity. "Homosexuality" also refers to one's sexual orientation, regardless of whether one acts sexually. Sexuality, whether heterosexual, homosexual or bisexual, refers to a variety of factors in a person: emotions, desires, fantasies, interactions, as well as physical actions. Being homosexual also involves a large number of social stigmas and pressures to be overcome.

So, when is a person considered to be "practicing" homosexuality? The Vatican document takes this broad term and gives it a narrow definition of referring to sexual activity.

As for supporting "gay culture," Cameli interprets this phrase to mean "an environment and a movement that advocates moral stances at variance with Church teaching." But this definition is not explicit in the document and does not conform to the way that ordinary people understand "supporting 'gay culture.' " The mere fact that the Vatican document puts "gay culture" in quotation marks indicates their negative evaluation of the concept.

In fact, gay culture has a lot in common with church teaching: the values of being true to oneself, of being courageous, of listening to the voice of God within a person, of loving and living as a full human being, and many more aspects. In such instances, church leaders should definitely want priests to support gay culture.

The question of what "support" of gay culture entails is also problematic. When a pastoral minister reaches out to a gay person, is that support of gay culture? When a person supports the equality of an LGBT person before the law, is that grounds to deny a person admission to seminary? If a person speaks out against lesbian, gay, bisexual and transgender youth being bullied, would that prevent this person from being ordained?

The Vatican's imprecise use of language in this document is as dangerous and harmful as the imprecision of the term "objective disorder" to refer to homosexual orientation. More and more bishops are requesting such language be retired by the church because it is misleading and causes negative effects. Yet, we see that style continues in this latest document.

As for the second criteria, Cameli acknowledges that the Vatican's phrase "deep-seated homosexual tendencies" is vague, but he offers four examples of men to whom it might apply:

The cause for the mental and emotional reactions Cameli describes is not "deep-seated homosexual tendencies." Instead, such behavior reflects certain men's lack of maturity in integrating their sexuality into their personality. These problems can exist in heterosexual priests, as well as homosexual priests. They are not the exclusive province of homosexuality.

If the Vatican did not want to ban gay men from the priesthood, why didn't they say so in clearer terms? What gay man reading this document will think that the Vatican welcomes him?

Instead, the Vatican used specifically vague and misleading language that is not understood by the rest of the world. That is the main fault with this document.

Cameli blames the media for too blunt an interpretation of this document. I disagree. The blame lies with Vatican officials who continue to use antiquated, uninformed language. They should know better. For more than 40 years, bishops, theologians, pastoral ministers and laypeople have been calling for church officials to use more accurate language about homosexuality.

If church leaders continue to use inaccurate language about homosexuality, the only thing that one can surmise from such behavior is that they do not understand the subject they are discussing or that they are content with promoting a negative evaluation of LGBT people. Neither alternative is responsible.

[Francis DeBernardo is executive director of New Ways Ministry, which describes its mission as "building bridges between the LGBT community and the Catholic church." This article first appeared on New Ways Ministry's Bondings 2.0 blog. It is used here with permission.]

Editor's note: New Ways Ministry has an online signature campaign "for Catholics to show support for the gay men who serve them pastorally through ordained ministry." Learn more about this campaign here.