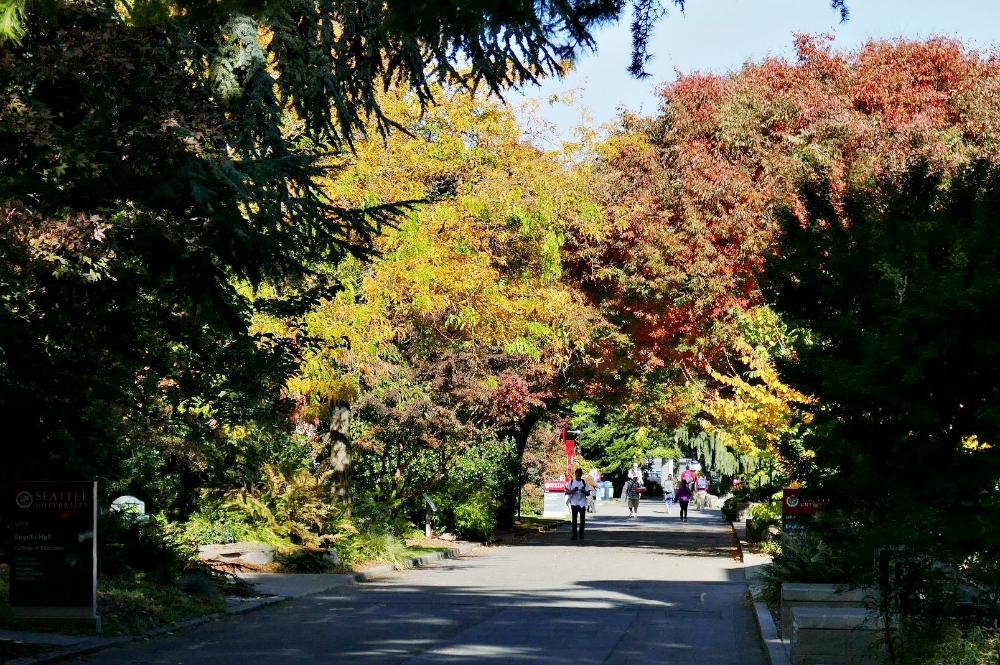 Autumn foliage is seen on the campus of Seattle University. The Jesuit university announced Sept. 19 that it will soon divest from fossil fuels. (Wikimedia Commons/Hermann Luyken)

"We join with others also at the forefront of the growing divestment movement and hope our action encourages more to do the same," university president Jesuit Fr. Stephen Sundborg said in the announcement. "Together, we can amplify our collective voice and accelerate the transition to clean, fossil-free energy sources."

The university plans to divest from 50 percent of its holdings in companies owning fossil fuel reserves by the end of 2020, and to be fully divested by the end of 2023. According to a report in The Seattle Times, Seattle University will be the first institute of higher learning in the state of Washington, as well as the first of American Jesuit-run colleges and universities, to fully divest.

RENSSELAER, IND. — St. Joseph's College, which has been shuttered since the end of the 2016-17 school year, announced that it had reached an agreement to restructure its $27 million debt, the Indiana-based Journal & Courier reported Sept. 20.

Per the agreement, the college will retain its campus, as well as some of its income-producing farmland.

It is unclear what is next for the college; it is said to be considering a partnership with Marian University, through which it would become a two-year satellite campus of the Indianapolis-based institution. The St. Joseph's campus will open Oct. 7 for an 11 a.m. Mass, and remain open until 1 p.m.

McALLEN, TEXAS — The Humanitarian Respite Center, an organization operating in a parish hall that has served more than 100,000 immigrants, has teamed up with Georgetown University to hold a design contest for its new home, an announcement posted to ArchDaily Sept. 27 said.

The group plans to build a two-story, 18,000-square-foot building in a vacant lot to "provide an opportunity for the refugees to refresh, to be nourished, to rest and to play, while volunteers help them make arrangements for the next phase of their journeys," the announcement said.

The center said it will choose a winning design from among 10 finalists in mid-December.

High schools in the network serve underprivileged children, offering a quality education the students could not otherwise afford. They also "provide a corporate work-study program with real world experience in addition to rigorous academic and spiritual preparation," the announcement said.

The Jesuit university's scholarships will cover tuition, room and board, and other academic costs, including books and supplies, for four years.

SPOKANE, WASH. — Gonzaga University announced the conclusion of the largest fundraising campaign in its history Sept. 20, having shattered the goals set at the announcement of the campaign seven years ago.

"I am so proud to announce that in true Zag fashion, not only did we meet our Campaign goal of $250 million, but we far surpassed it, raising $355.4 million from more than 40,000 donors," university President Thayne McCulloh said in the announcement of the campaign's completion. "This will change the way our institution operates and will allow us to do even more to keep Gonzaga competitive and thriving."

More than $110 million of the money raised will go to scholarship support. Other funds will go to creating new academic programs and faculty positions, as well as "new and improved spaces on campus."