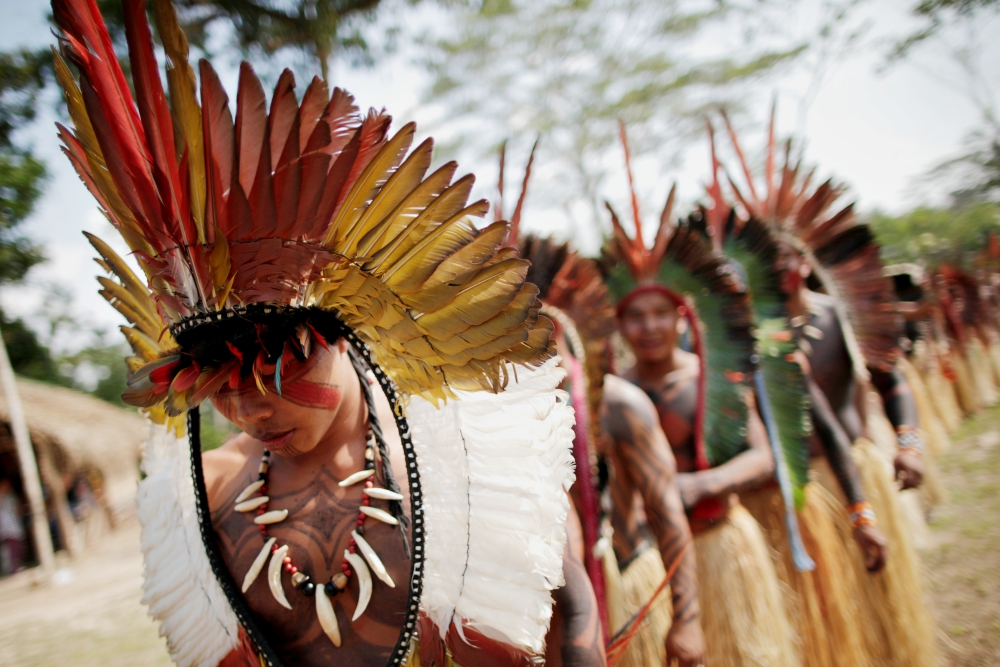 Shanenawa people dance Sept. 1 during a festival to celebrate nature and ask for an end to the burning of the Amazon, in the indigenous village of Morada Nova near Feijo, Brazil. (CNS/Reuters/Ueslei Marcelino)

As I write this feast day of St. Francis, reminded that "we ourselves are dust of the earth" (Genesis 2:7) and that "our very bodies are made up of her elements" ("Laudato Si', on Care for Our Common Home"), human and other-than-human kin pervade my being with a question.

How do we co-sense the intimacies — the mutual relatedness and embeddedness — between our other-than-human kin (rocks, minnows, wind, etc.) and diverse human kin throughout the Earth and across time?

The question reverberates in Laudato Si''s invitation to new dialogue. A condition of the possibility of authentic dialogue demands that people who believe they are white become humble enough to listen to both indigenous peoples and our other-than-human kin everywhere.

I purposefully write "people who believe they are white" to echo James Baldwin's insight that we are living a lie. Our living lie — white supremacy — severs intimate ties across creation in all of our quotidian endeavors.

How so? Consider Métis anthropologist and scholar Zoe Todd's reflection on the entanglements across time between other-than-human and human kin that heralds black and indigenous ways of attending to mutually complex interrelationships between rocks, fish and humans.

Todd invites contemplation of Christina Sharpe's reflection In the Wake: On Blackness and Being. Sharpe, a leading scholar in black diaspora studies, invites readers to imagine the historical, hydrological wake of an Atlantic slave ship to co-sense the enslaved peoples who were deliberately drowned in the Middle Passage and who endure through "residence time."

The amount of time it takes for a substance to enter the ocean and then leave it is what scientists call residence time. Sharpe learns from a colleague who is a marine geographer that human blood is salty, and that sodium has a residence time of 260 million years.

Sharpe then asks: "And what happens to the energy produced in the waters? It continues cycling like atoms in residence time. We, Black people, exist in the residence time of the wake, a time in which 'everything is now. It is all now.' "

Whether and how does residence time in the wake of Atlantic slavery, I wonder, even register in white settler being?

Consider the panel of scientists who voted this past spring to designate a new geologic epoch — the Anthropocene — to name a period that coincides with the measurable impacts of the "great acceleration" of human activities over the last century.

No longer are human activities insignificant for the Earth system. This new human-dominated geological epoch generates unprecedented global impacts that geologists measure in layers of the earth. Scientists find no geological analogue for the period we now navigate.

These scientists set the Anthropocene at 1964. This date highlights the cumulative, devastating impacts of the atomic bomb, of a capitalist, fossil-fuel based economy with its concomitant overconsumption and waste, especially nonbiodegradable materials like plastics and concrete, that dramatically alter the dynamics and functioning of the Earth system.

Other scientists, however, contest the dating of 1964 because it fails to account for the measurable geological impacts of the Anthropocene with European settler colonization.

Geographers Simon Lewis and Mark Maslin, for example, advance two hypotheses for marking the beginning of the Anthropocene with European colonization.

Their first hypothesis concerns how the ecosystems of Europe and the Americas were reshaped through the exchange of plants and animals. The evidence for this change is found in the kinds of biomass accumulated in European and American continents.

Lewis and Maslin's second hypothesis, far more terrifying, examines geological strata that reveal how carbon dioxide levels dropped when genocide eviscerated indigenous peoples throughout the Americas. While 54-60 million peoples lived in the Americas in 1492, by 1650 there were only 6 million.

They call this the "Orbis spike" of 1610, because the onset of globalization ("Orbis" or world) in the form of European colonization coincides with dramatic geological changes in landmass and carbon dioxide levels.

Lewis and Maslin conclude that the "Orbis spike implies that colonialism, global trade and coal brought about the Anthropocene." They underscore the "unequal power relationships between different groups of people, economic growth, the impacts of globalized trade, and our current reliance on fossil fuels."

Far from being a past event, Lewis and Maslin caution that the "onward effects of the arrival of Europeans in the Americas highlights a long-term and large-scale example of human actions unleashing processes that are difficult to predict or manage."

In the wake of slavery, the Anthropocene extends colonialist logics that sever relations between humans and soil, plants and animals, and even "between minerals and our bones."

Zoe Todd and Heather Davis pragmatically deploy the "Orbis spike" to thread interwoven ties between the Anthropocene and colonization. Their interest, however, goes deeper than a scientific marker; "we are interested in how rock and climate are bound to flesh."

Sharpe's residence time registers how rock and climate are bound to flesh. If we attend to residence time, it offers the possibility of learning from black and indigenous ancestors whose bodies endure in landmass and oceans as "oxygen, hydrogen, and atoms."

Returning to the residence time of the Middle Passage that she must honor in order to survive, Todd asks: "What if the rocks are working in concert with those residence times of those who were violated by the nightmares that white supremacy has summoned?"

Her question haunts and nurtures wonder. Will we white settlers turn toward a new way of being? Will we cultivate a tender way of co-sensing our mutual relationality, interconnectedness and obligations with and for indigenous and black kin as well as other-than-human kin?

How we answer these questions concerns the condition of the possibility of the dialogue Pope Francis invites.

May our prayer be that white people muster the capacity to humble ourselves and listen attentively to the plural registers of residence time with and for our indigenous, black and other-than-human kin.

In the spirit of St. Francis, nurturing a humble, listening heart is requisite to disrupt the evil of our time. Becoming humble is requisite for decolonizing the Anthropocene. Indeed, enkindling vulnerability with and for our human and non-human kin is requisite for the renewal of the Earth.