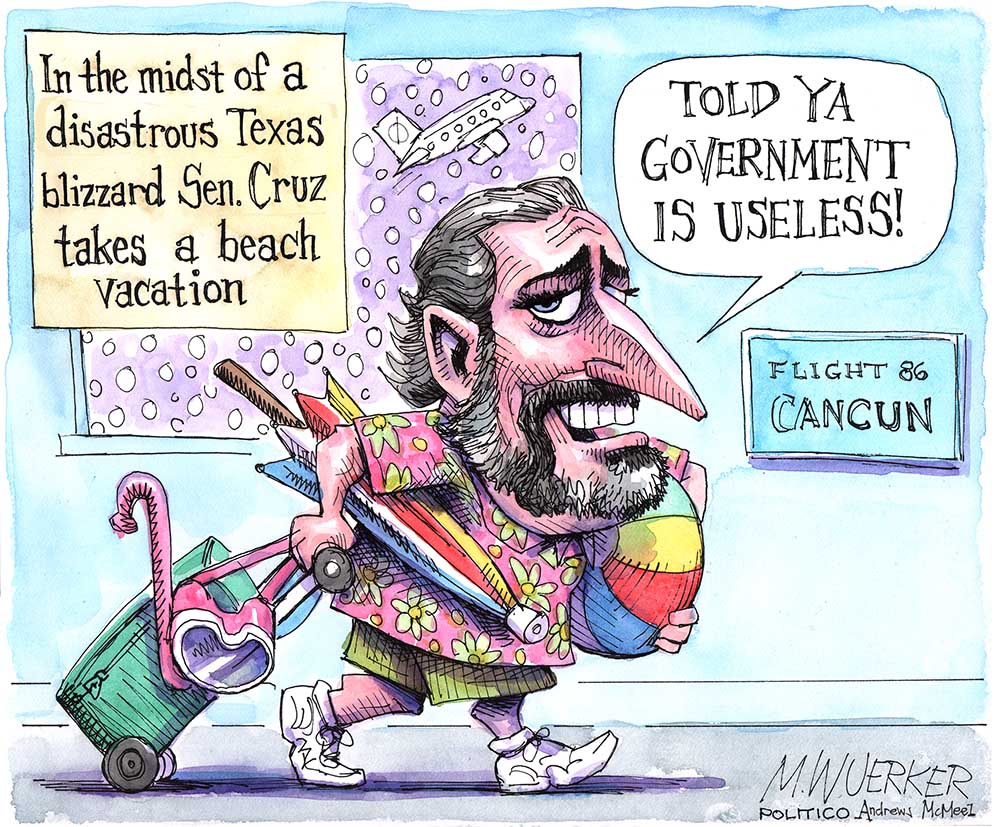 The image of Texas Sen. Ted Cruz pulling his carry-on suitcase through an airport, en route home from an escape to Cancun, Mexico, in the aftermath of one of the most devastating storms to hit his state, has become an icon of extreme indifference on the part of an elected leader.

Cruz claimed he was just trying to be "a good dad" by responding to his daughters' request for a resort vacation, while millions of Texans were suffering without power and clean running water. The storm resulted in the deaths of dozens in the state, including an 11-year-old boy who died in his freezing home.

It's unfortunate that the senator's paternalistic benevolence doesn't extend to the citizens he was elected to represent.

But Cruz is just one in a long line of politicians — most, but not all, of them Republicans — to preach the gospel of a rugged individualism that falsely assumes that all Americans have equal opportunity and privilege. And nowhere is that cowboy individualism stronger than in Texas, where the phrase "everything is bigger in Texas" may apply to steaks, but not to government.

Instead, government is a problem to be tolerated only through minimization. Think of former President Ronald Reagan's famous quote: "The nine most terrifying words in the English language are: I'm from the government and I'm here to help."

We're betting that quite a few Texans would not be terrified by offers of government assistance these days.

In fact, Reagan was the architect of this small government movement in the U.S. (while his contemporary Margaret Thatcher was doing the same thing in Great Britain): cutting taxes, decreasing allegedly "wasteful" spending, and getting rid of regulations. Today's Republicans sing the same tune, even as their constituents are suffering from those spending cuts and lack of regulations.

What happened in Texas has proved to be — if you'll pardon the pun — the "perfect storm" for assessing a future in which a deregulated and underspending government fails to respond to catastrophic events, especially those caused by climate change.

As EarthBeat's environment correspondent Brian Roewe reported, the failure of Texas' electric grid was the result of a lack of investment in modernizing and weatherizing it. And attempts to blame renewable energy were patently false.

"The storm may have been an act of nature, but the devastation of the electrical grid shutdown is an act of sheer negligence," Auxiliary Bishop Greg Kelly of the Dallas Diocese said in a statement.

And the grid's isolation from the other networks in that part of the country, which could have helped prevent the devastation, is an apt metaphor for the need for more economic interconnectedness, as described by Pope Francis in his latest encyclical, Fratelli Tutti, where he rails against economic and political models that fail to promote the common good.

"We are more alone than ever in an increasingly massified world that promotes individual interests and weakens the communitarian dimension of life," Francis writes.

"The marketplace, by itself, cannot resolve every problem, however much we are asked to believe this dogma of neoliberal faith," Francis continues, adding that "the fragility of world systems in the face of the pandemic has demonstrated that not everything can be resolved by market freedom."

It's not a coincidence that the Texas storm hit poor communities the hardest. Perhaps in addition to speaking about the common good, we need to also hold up the necessity of common goods — things like power grids, roads, bridges and other infrastructure — things we all need. Or at least those of us who cannot escape to a resort when things fall apart.

While Cruz was hurrying home to attend to the PR disaster that his vacation had caused, another elected official was working to raise more than $5 million in relief for Texans and traveling to the state to meet with those who were suffering.

That official was New York Rep. Alexandria Ocasio-Cortez, often criticized for her belief in a form of democratic socialism that favors economic and political systems that meet public needs, rather than favoring the profits of a few.

Perhaps Texas could use a little socialism right now.

A version of this story appeared in the March 5-18, 2021 print issue under the headline: Storm aftermath a lesson in need for government.