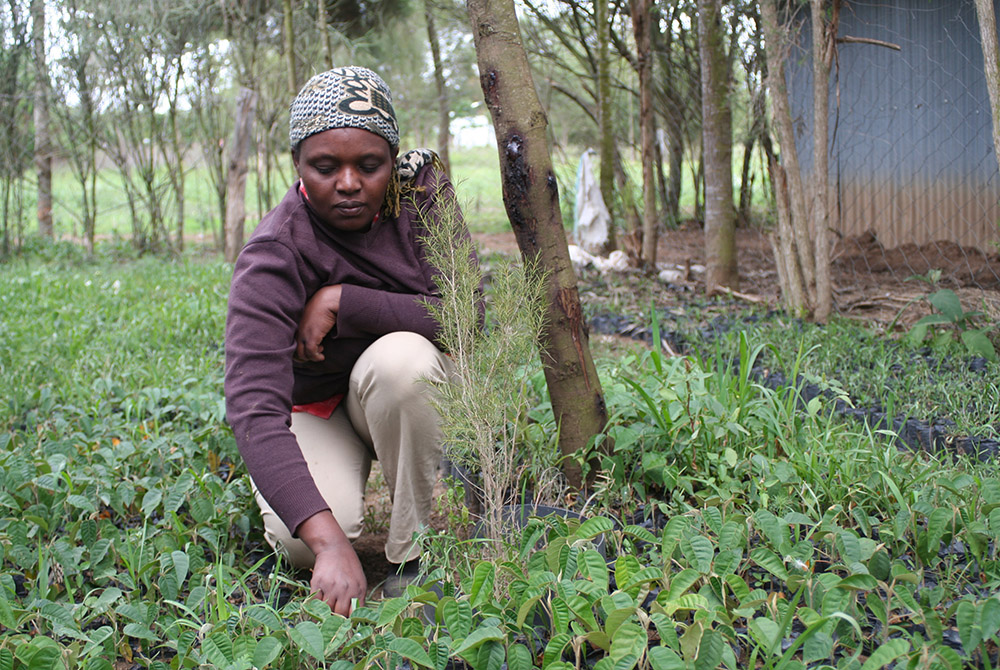 About 100,000 farmers in four countries are part of The International Small Group and Tree Planting Program, or TIST, which allows individuals and corporations to fund trees that are used as part of a carbon-offset market. (The TIST Program)

In early November, parishioners at Immaculate Conception Catholic Church in Hampton, Virginia, planted five new trees on the parish grounds. There were two serviceberry trees, two Chinese fringes and a dawn redwood, which, once full grown, can tower to heights eclipsing 100 feet.

The significance of the trees goes beyond beautifying the landscape. They represent the 5,000 trees the parish funded to be planted in Kenya as part of a continuing commitment to environmental stewardship and a newfound fellowship in faith with farmers an ocean away.

The trees were planted through The International Small Group and Tree Planting Program, or TIST, a U.S.-based organization that markets carbon offsets from the tree groves it helps small groups of farmers plant in Africa and India.

During the summer, Immaculate Conception raised $5,000 to fund the 5,000 trees. As it turns out, several of the Kenyan farmers who will plant and tend to the groves are Catholic, too, including members of St. Luke Gitero Catholic Church in Naro Moru, a small town near the base of Mount Kenya. Connected by TIST, the Catholic communities have exchanged video messages sharing about their faith, families, local churches and, of course, the trees. 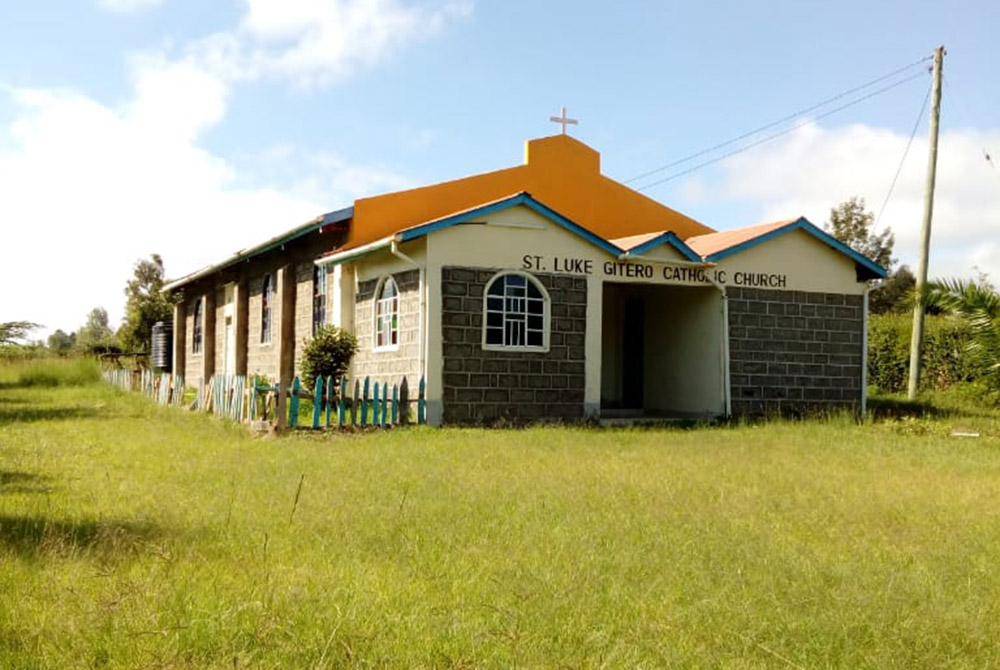 St. Luke Gitero Catholic Church, in Naro Moru, Kenya, is one of home parishes of farmers who have connected with fellow Catholics at Immaculate Conception Catholic Church, in Hampton, Virginia, as part of the TIST tree planting program. (The TIST Program)

Fr. John Grace, pastor at Immaculate Conception, calls the project "a beautiful connection of Laudato Si' and Fratelli Tutti," referencing Pope Francis' twin encyclicals that bind caring for a common earthly home with caring for one another as part of a global neighborhood.

"We're supporting our community that just happens to be physically located in a different place, but they're our brothers and sisters," the pastor said.

Planting trees at home and abroad is the latest effort by Immaculate Conception to reduce its carbon footprint. In 2019, it became the first Catholic parish in the state to switch to 100% solar energy, and it has since installed additional solar panels on the rectory.

Looking to do more, Grace turned to tree planting as a next step on the path to carbon neutrality — balancing emissions produced with those removed from the atmosphere. 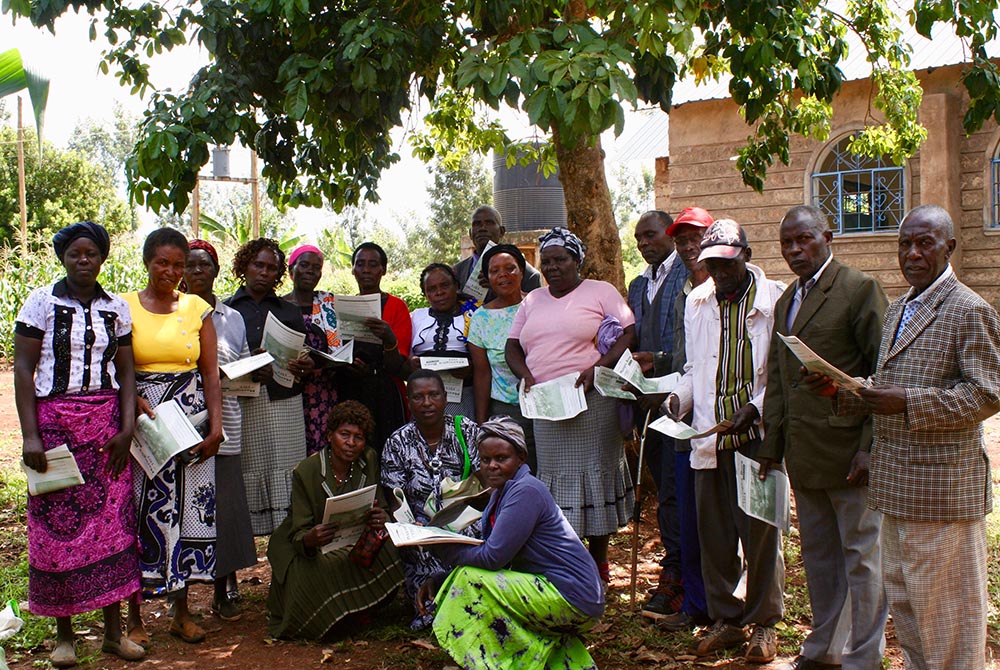 About 100,000 farmers in four countries are part of The International Small Group and Tree Planting Program, or TIST. (The TIST Program)

Carbon offsets work like this: An individual or organization — such as a state, corporation, school or even parish — seeking to cut emissions funds efforts to reabsorb and store carbon dioxide to "offset" emissions they can't, or won't, reduce on their own. Airline passengers, for instance, can purchase credits to offset emissions from a flight, and companies and schools looking to go carbon neutral have sought out credits to cover energy drawn from local power plants running on coal or gas.

Grace's search for a tree-focused offset program led him to TIST.

Since its formation in 1999, TIST has partnered with 100,000 farmers to plant and maintain more than 20 million trees. According to TIST, the program to date has captured and stored 5.5 million metric tons of carbon emissions. TIST charges $1 per tree planted, and $15 for each carbon credit, and has sold credits to major corporations like Delta Airlines.

TIST estimates each tree planted will sequester an estimated 133 kilograms of carbon dioxide over 10 years. In Immaculate Conception's case, the parish did not calculate its total carbon footprint and did not view the 5,000 trees as a total offset. Using TIST's calculations, the trees the parish funded — if kept alive for the 30 years that farmers commit to tending them — equate to nearly 2,000 metric tons of offset carbon emissions, or the equivalent of not burning 2.2 million pounds of coal.

Vannesa and Ben Henneke, who are Episcopalian, founded TIST after a series of mission trips to Tanzania. During one visit, local community members expressed a desire to replant the trees that once covered the local hills and mountainsides.

"Most of these are subsistence farmers who really are relying on their own farms for food," Vannesa Henneke told EarthBeat. 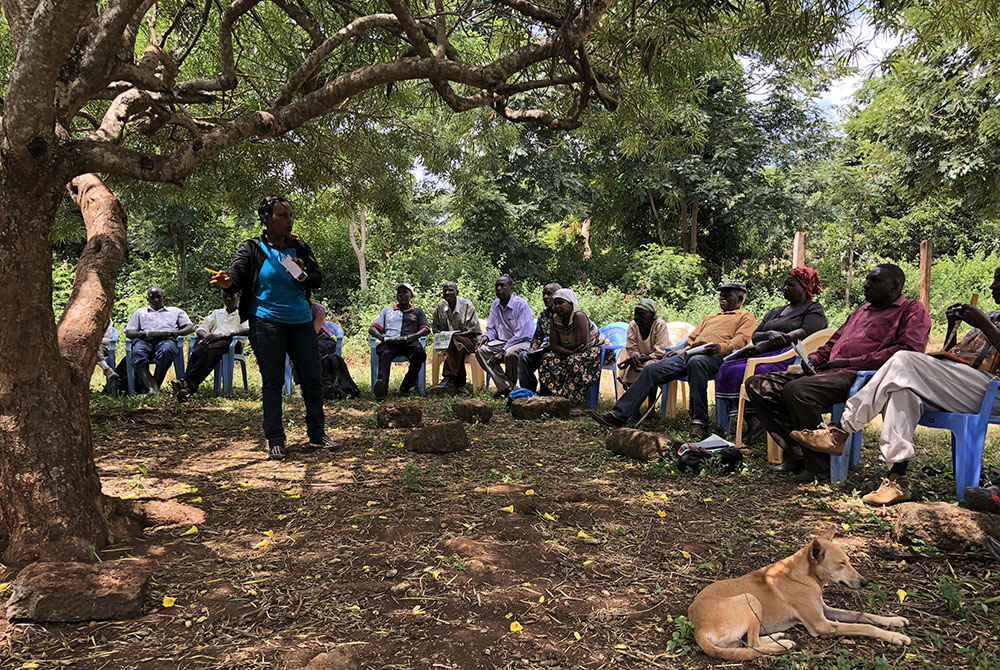 Farmers who are part of the TIST program in Kenya take part in a cluster meeting, where small groups of farmers receive news, training and payments related to the tree-planting program. (The TIST Program)

By combining crops with trees in their farm plots, she said, they can restore the landscape and also provide food and income for their families. Along with capturing carbon dioxide, the trees reduce erosion and provide food like fruit and nuts, fuel, livestock fodder, shade and protection against powerful wind gusts.

Besides Tanzania, TIST works in India, Uganda and Kenya, the latter its largest program, with approximately 75,000 farmers.

Small groups of farmers, 47% of whom are women, make the decisions about which trees are planted, while TIST provides training. The farmers own the trees and are paid a stipend for keeping them alive during the 30-year period they commit to serve as their caretakers. They also receive 70% of the net profit from the sale of carbon credits.

While TIST is not religiously affiliated, for the couple it is "a mission of our heart and what we feel God wants us to be doing," Vannesa Henneke said.

Grace said the overlap in values, and the extra benefits of tree planting, beyond offsetting carbon emissions, made working with TIST a good match. He hopes to meet some of the farmers at a TIST-organized gathering once travel is possible again.

Parishioners have told the Virginia pastor that the project has raised their spirits at a time when the coronavirus pandemic has left them feeling cut off and helpless.

"I think it's really important that we act as best we can, even in the small areas," he said, "to keep moving forward around what really matters: caring for each other, breaking down the boundaries between each other and promoting the value of God's gift [of] life, creation." 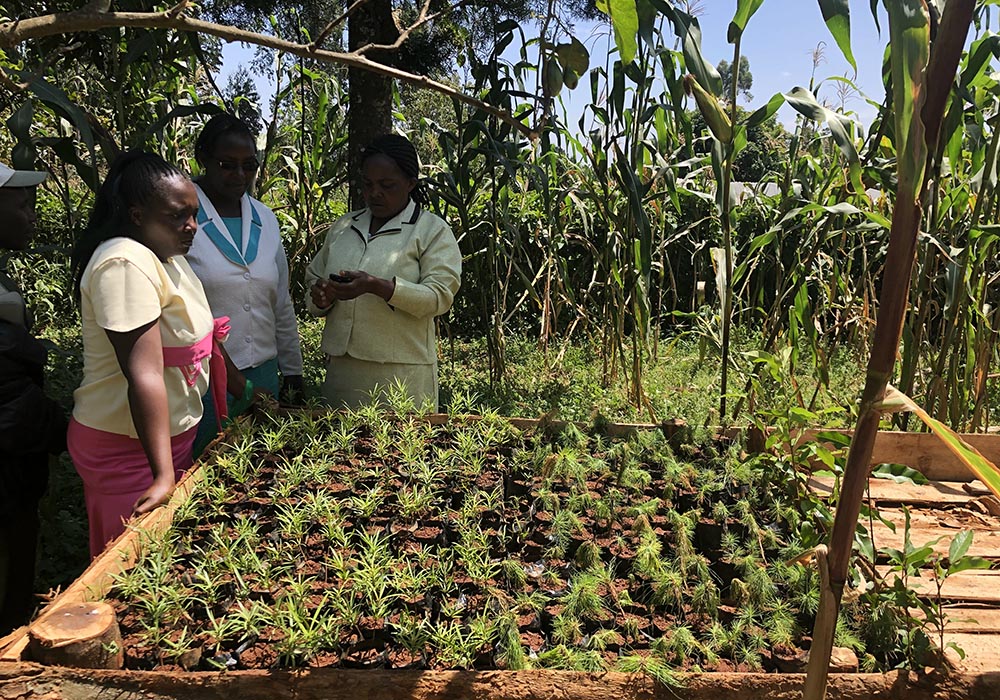 Famers who are part of the TIST program in Kenya observe some tree saplings. An estimated 75,000 Kenyan farmers are part of TIST, which works with farmers in four countries who grow trees that are then used for selling carbon offsets. (The TIST Program)

Climate change mitigation programs that take advantage of trees' ability to absorb carbon dioxide are attractive to policymakers. President Joe Biden's sweeping climate plans include carbon sequestration through tree planting and farming techniques. Even some Republicans have backed proposals for planting a trillion trees by 2030, and other countries are making similar, though more modest, pledges.

But where some see carbon offsets as a solution, others point out a panoply of problems.

CIDSE, a mainly European-based network of Catholic development agencies, has criticized carbon offsets as a "false solution" to climate change. Instead, it promotes wider adoption of agroecology — a sustainable, locally oriented approach in which farmers grow food and replenish soil nutrients without using chemicals.

A common critique of carbon offsets is that they allow the wealthy and large polluters to continue pumping planet-warming greenhouse gases into the atmosphere and don't provide enough incentive to change behaviors and reduce emissions.

Critics also argue that carbon markets pass the burden of reducing emissions on to small-scale farmers, who often live in the countries least responsible for producing greenhouse gases but most at risk from the impacts of the rising global temperatures they fuel.

A December report from the Minneapolis-based Institute for Agriculture and Trade Policy said carbon trading can endanger food security by changing the way farmers use their land or forcing them off their land to make way for tree plantations.

Ensuring that proposed emission offsets are actually achieved is also complicated, the report said, both because it is difficult to measure carbon sequestration accurately and because carbon can be released back into the atmosphere if trees die, are cut down or are destroyed by weather-related disasters.

Then there's the question of verification.

In 2019, ProPublica published an extensive investigation into the problems facing carbon markets, finding that forests in Brazil and Cambodia that were set aside for selling carbon offsets were ultimately cut down.

One infamous incident involved the Vatican itself, which in 2007 under Pope Benedict XVI partnered with U.S. and Hungarian companies to restore more than 600 acres of forests in Hungary. The project was meant to offset the city-state's emissions and make it the first carbon-neutral country in the world. Three years later, however, no trees had been planted and the Vatican considered taking legal action. In December, Pope Francis set a new goal of carbon neutrality by 2050.

TIST says it uses a verification system, updated regularly and accessible on its website, in which third-party verifiers conduct routine counts of trees that have been planted and their maturity, along with groves that have been lost because of weather, a herd of stampeding elephants or other causes. It also has an additional audit system.

Henneke told EarthBeat that TIST has been verified by third parties 28 times and is certified under the internationally recognized Verra standards.

"When people see this monitoring system, they're surprised about the detail, because we knew from the very beginning we wanted to be able to say, 'OK, these trees are being planted by these farmers in this latitude and longitude,'" she said.

In recent years, TIST has partnered with the Catholic Climate Covenant to fund tree planting as part of Earth Day and feast of St. Francis programs. A page on one of TIST's websites highlights the partnership and places the program into the language of Laudato Si': "TIST Farmers are caring for God's creation by responsibly and sustainably caring for their local environment, local biodiversity, the global climate, and the well-being of their families and communities."

Grace has worked with TIST to write materials that he hopes will encourage parishes and schools not only to consider tree-planting efforts of their own, along with connecting with the farmers doing the work, but also to respond more broadly to the pope's call for ecological conversion.

"The gestures are real and they're concrete, but they're also symbolic," Grace said, adding, "We have cleaner air in Virginia because of what African farmers did planting trees in Kenya. There are no boundaries or borders in the natural world."

Editor's note: This story has been updated to clarify that the estimated carbon sequestration figure for the trees funded by Immaculate Conception Parish reflects the 30-year timeframe that farmers commit to grow and tend the trees.