by Brian Roewe
Action
This article appears in the Our Common Home feature series. View the full series. 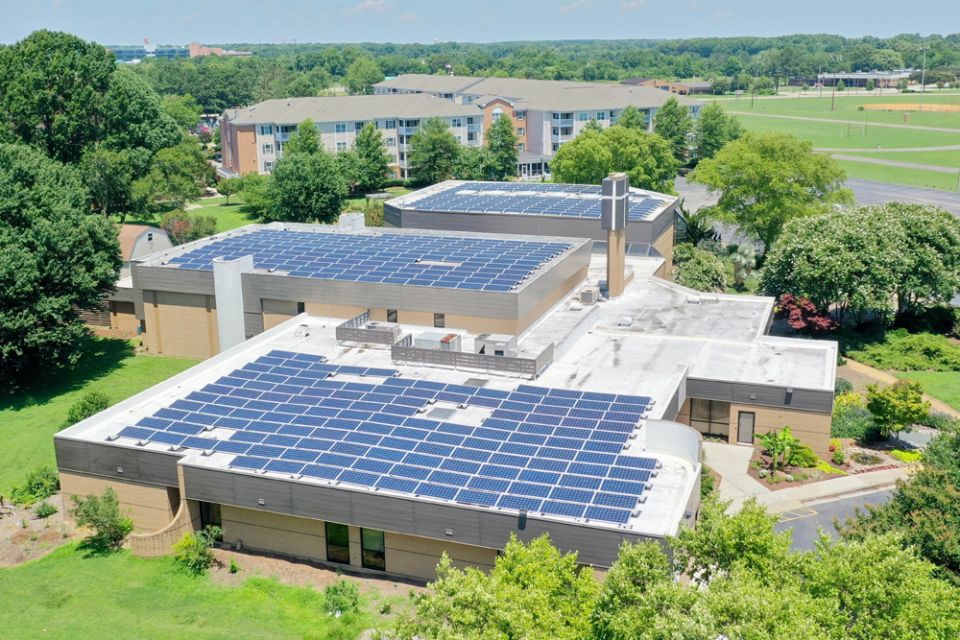 A total of 440 solar panels were installed in June on the church building roof at Immaculate Conception Catholic Church in Hampton, Virginia. (Vy Barto)

In mid-June, the southeastern Virginia parish flipped the switch on a 142-kilowatt solar energy system that will generate 100% of the parish's energy use from the sun.

A total of 440 solar panels now dot the roof of the church building. It is the first parish to complete a solar project with Catholic Energies, a program of the Catholic Climate Covenant aimed at helping church organizations implement solar power and energy efficiency projects at no cost to the institution.

Through a power purchase agreement with Red Lion Renewables, which fully financed the $350,000 project, the solar panels will save Immaculate Conception 14% on its monthly electric bill and is projected to cut parish energy costs by $125,000 over 15 years. The panels are also expected to prevent the release each year of roughly 230 tons of carbon dioxide — the equivalent carbon emissions from 25 homes' total energy use for one year.

The cost benefit was not the only factor pushing the parish to solar energy, said pastor Fr. John Grace at the dedication ceremony June 15. 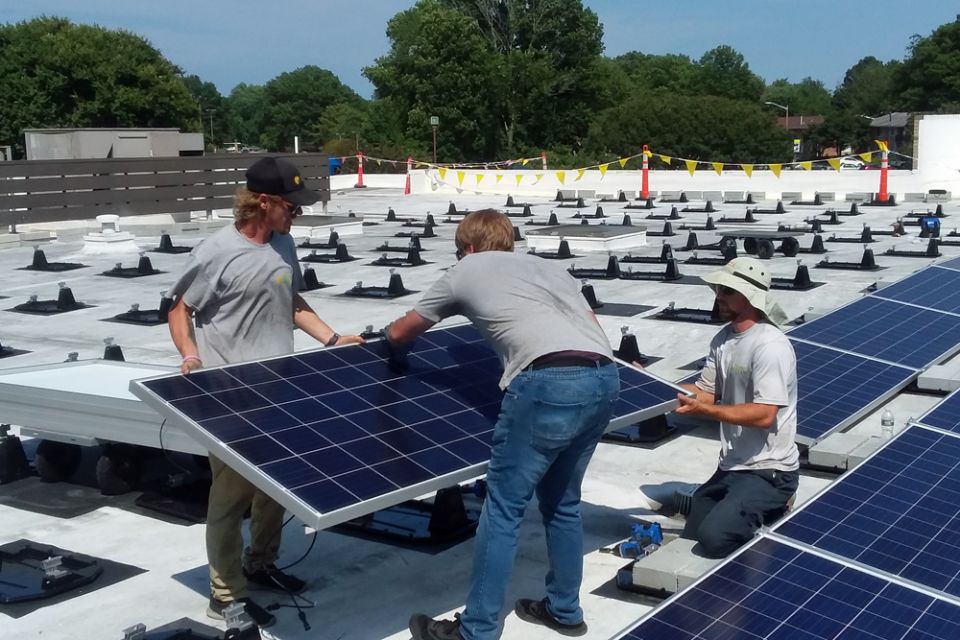 "I'm not interested simply in, 'Can we as a parish save a few bucks?' " he said. "I am interested in terms of the witness value of this parish for a much larger world."

With the help of Catholic Energies — a program of the Catholic Climate Covenant to assist parishes, religious orders and other Catholic institutions explore energy efficiency and solar projects — the Hampton, Virginia, parish was able to secure investment from Iowa-based Red Lion Renewables. Red Lion footed the $350,000 cost of the 440-panel solar array and owns the system. Immaculate Conception now pays its electric bills to Red Lion through a power purchase agreement at a rate roughly 14 percent lower than they had with Dominion Power.

That access to capital, along with time and expertise with energy projects, is a primary goal of Catholic Energies, said Page Gravely, executive vice president for client services. Finding the money, he told NCR, has long been a major barrier for church organizations when considering large-scale projects.

"Our number one priority was to find capital and bring the market to Catholic real estate," he said.

Before Catholic Energies finds the money, they first conduct a preliminary review to see what energy efficiency or solar efforts are possible and what it may look like. It's here they also get the “Is there enough sunlight?” question.

"There’s never a shortage of sunlight," Gravely said. Other factors, such as the size, direction, strength and age of a roof, along with shade, play a greater role in determining if solar is a good fit.

The project at Immaculate Conception was greatly assisted by its location in a state-designated economic development zone, which incentivizes investors with tax benefits. Those types of state and market incentives can catalyze energy projects, though what tax rebates and renewable energy credits exist differ from state to state.

Another issue can be finding investors willing to pay for small projects, like a single parish. Grouping multiple parishes or schools together can be one way to attract funders, Gravely said.

The symbolism of the parish reducing its dependence on fossil fuels isn’t lost on residents of this coastal community just north of Virginia Beach. The region is among the most vulnerable in the country to tidal flooding worsened by climate change. A 2018 report from the Union of Concerned Scientists estimated that more than one-third of homes in Hampton are at risk for chronic flooding by 2100.

Immaculate Conception, home to about 700 families, is the first parish in the Diocese of Richmond, Virginia, to go solar, and is among the latest religious communities nationwide to examine ways to limit their carbon footprint. Nearly 800 Catholic institutions, including the Richmond and Arlington Dioceses in Virginia, have signed the Catholic Climate Declaration pledging to take steps to meet the goals of the Paris Agreement on climate change.

In early June, Catholic Charities of the Washington, D.C. Archdiocese announced plans to install a 2-megawatt solar array, which will offset 100% of electricity use from the 12 buildings it operates in the district and surrounding Maryland area. The ground-based system, also through Catholic Energies, is estimated to offset 3,400 tons of carbon dioxide emissions, or 1,686 tons of coal burned. It will be the largest such solar energy system built in the D.C. area.

At Immaculate Conception, it took roughly nine months to turn the idea of a solar array into reality.

Grace, who arrived as pastor last summer, was exploring energy efficiency measures for the church when he discovered Catholic Energies, which launched in October 2017. The energy project program examined past energy bills and the feasibility of solar at the church. They also took the lead in identifying potential investors and contractors.

As the pastor discussed the project with the parish councils, he also reached out to other churches across the country that had installed solar to get more information about not only the how-to but also how it can transform the parish community.

"I didn't want this simply to be 'Oh, good, we're going solar,' " Grace told NCR. "I wanted this actually to be part of the beginning of a renewed effort by the parish to care for God's creation."

An advantage for Immaculate Conception is its large, flat roof. Another is its location in a state-designated economic development zone, making it more attractive to financers. After signing a contract in February, Catholic Energies led the effort to secure funding and select a solar contractor. As part of its power purchase program, the parish had no out-of-pocket expenses for installation or ongoing maintenance.

The Richmond Diocese also had to sign off on the project, as it owns the parish. Grace said the diocese was supportive, though somewhat surprised as no one had asked for such permission before. 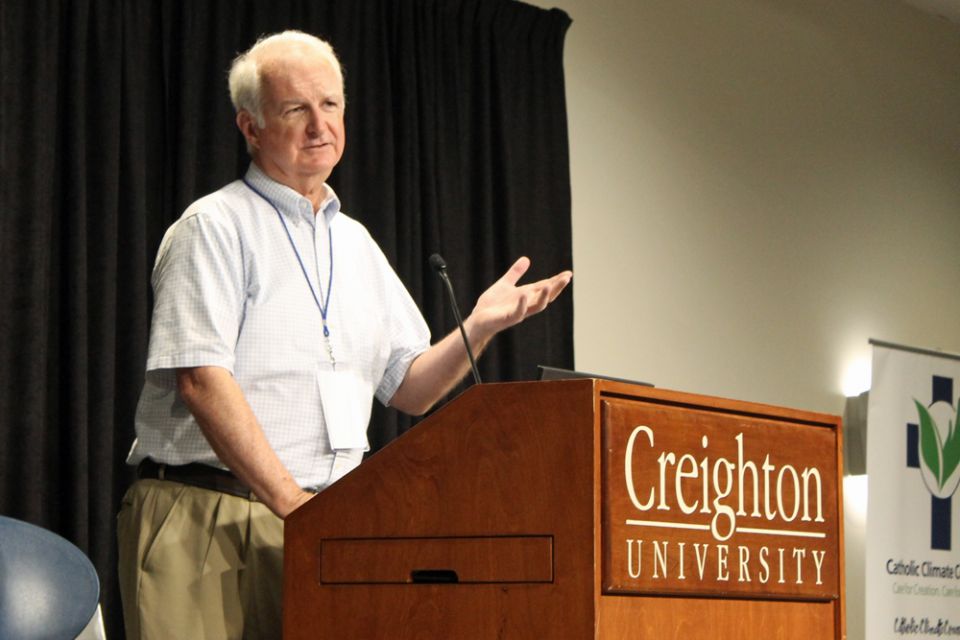 As the solar project progressed, Grace provided regular updates at Masses. Often, his announcements were greeted with applause from parishioners. After one liturgy, an older woman told the pastor, "I'm just so proud to be part of this parish."

The solar panels have had another unexpected effect: attracting younger adults to the parish.

"Somebody told me, 'I had no idea the Catholic Church cared about this, enough to act on it,' " Grace said.

Immaculate Conception hopes the solar panels will boost and renew awareness of environmental issues within its community. Already, the Sunday Supper program that offers weekly meals to the hungry has begun using dishes and plates instead of disposable versions, and the parish is planning its second round of study groups on Pope Francis' encyclical "Laudato Si', on Care of Our Common Home."

While the cost savings are helpful, Grace said the parish's first consideration was the responsibility as a Catholic community to be good stewards of creation and to live out the interconnectedness with the environment and other people that Francis has stressed.

"It's really about being a good neighbor and doing our part of impacting for good, caring for creation," Grace said. "… That we are consuming less fossil fuels. That we are, therefore, lowering the amount of trash in the air. Well, that's what good neighbors do for others."

A version of this story appeared in the July 12-25, 2019 print issue under the headline: Virginia parish goes 100% solar for free .