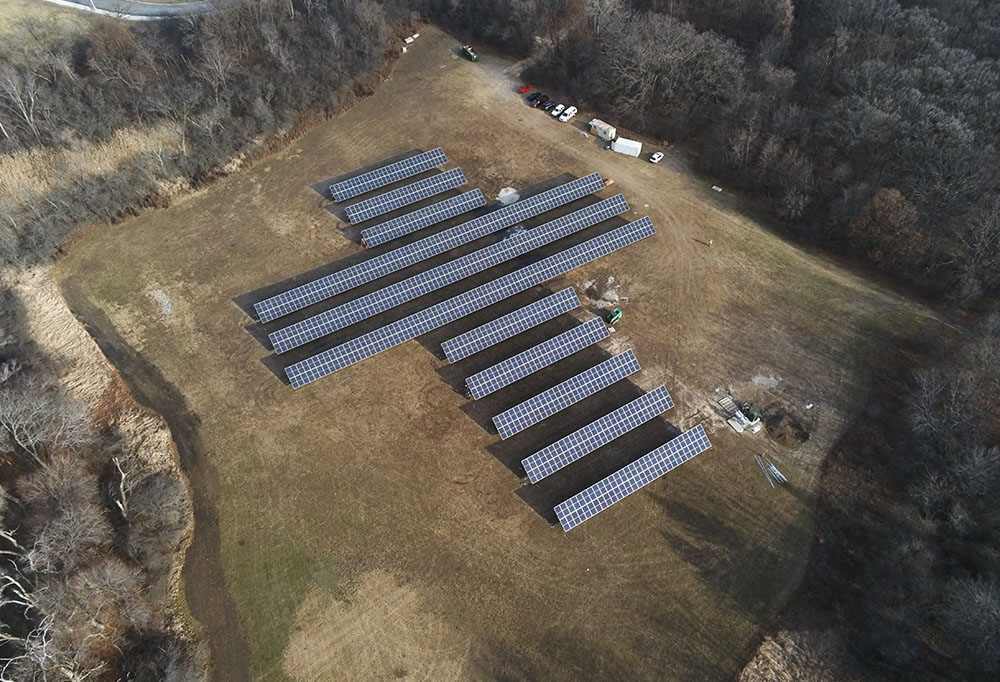 The Christmas star shining over Mundelein, Illinois, this season was the sun, as a 300-kilowatt solar energy project went into commercial operation Dec. 25 on the campus of the University of St. Mary of the Lake/Mundelein Seminary.

The project was inspired by Pope Francis' encyclical "Laudato Si', on Care for Our Common Home," as well as by Cardinal Blase Cupich, who as leader of the Chicago Archdiocese has stressed the importance of energy efficiency, university president and seminary rector Fr. John Kartje told EarthBeat.

It is the first solar energy generating plant on a U.S. Catholic seminary campus and the first in the Chicago Archdiocese, according to a statement from the university.

Because the once-rural campus includes some 1,300 acres of land, and solar technology has become both more economical and more efficient, Kartje and other administrators decided to look seriously at the possibility that the school could generate some of its own power.

The solar array, which took about a year to plan and build, will generate 20-25% of the kilowatt hours of electricity that the university and seminary use.

It is expected to recover the initial $800,000 investment in fewer than 10 years, and it will save the school $1 million in energy costs over the next 35 years, according to David Brochu, CEO of PureGen Power, a local solar energy development firm that provided the technical expertise for the project.

For Brochu, who usually builds much larger projects, the 5-acre project at Mundelein was a way of "doing something good for the Earth" while supporting the seminary, where he and his wife are benefactors and have participated in spiritual formation and other activities.

"Using solar or renewable energy ... and decreasing the amount of energy consumed [that is generated] by fossil fuels is in alignment with parts of [the pope's] encyclical," he said.

Among other things, Laudato Si' calls for "developing renewable and less polluting forms of energy" and "encouraging a more efficient use of energy."

A mechanical engineer who has been working in the solar energy field since 2007, Brochu took the lead in bringing together a group of investors who were supportive of the seminary, as well as in planning and design, obtaining the necessary permits, and overseeing installation.

The Mundelein project takes advantage of "Illinois Shines," a state-managed incentive program that provides credits for solar energy systems. Program participants can either install a solar energy system on their own property to offset their energy use, as Mundelein did, or subscribe to a community solar project in exchange for a share of the electricity it generates.

In Mundelein's case, the utility company buys back the credits from a group of investors who formed a limited liability company, USML Laudato Si' Solar, which takes its name from the university and the encyclical.

That company owns the solar energy system, leasing the land from the university. In turn, it sells the electricity generated by the solar array to the seminary at a discounted rate. The university eventually will take ownership of the facility.

"What it allows us to do is build a solar power plant and sell the electricity back to the university, so that they save money over the life of the project," Brochu told EarthBeat.

The strategy of recruiting investors allowed the university and seminary to avoid paying the up-front costs in a lump.

"Eight hundred thousand dollars would be a lot of money for the university," Brochu said. "Doing it this way, where you use a third party and outside investment, you still have to pay for the electricity from the solar plant, but it should be less expensive than what you're paying the local utility."

The original design called for a rectangular array of solar panels, but when Brochu saw it would not occupy the entire area set aside for the project, he changed the design to a cross.

"I thought it would be a great idea [for] a Catholic seminary, and I think it's a great tribute to our Lord," he said.

"If you're flying into O'Hare [Airport], anybody coming in from the northwest or northeast [will] see it if it's daytime," he added.

Institutions considering such a move should take into account the cost of electricity, the amount of sunshine their area receives in a year and incentives available from the state government, Brochu said. Solar energy is most efficient in California and the Southwest, but can be feasible farther north with incentives like those offered in Illinois.

Kartje hopes the system will inspire other dioceses and church institutions to consider similar projects. "It's a win-win," he said. "It's significant. It's an energy saver, but it's [also] very cost efficient."

It also shows how church teaching on care for creation can be put into practice.

"I try to use this with the seminarians as a great example of what they can and really should be doing in their parishes" once they are ordained, he said.

An important lesson, he added, is "to not be shy about allowing your people to use their gifts in service of the church. Everyone brings a different skill set, a different passion. And it can be a really wonderful partnership."

Kartje said he urges his students to be open to new ideas "and really invite that kind of participation from your parishioners. I've been really very grateful for the way this project has unfolded and the way we've been able to engage the wider church."