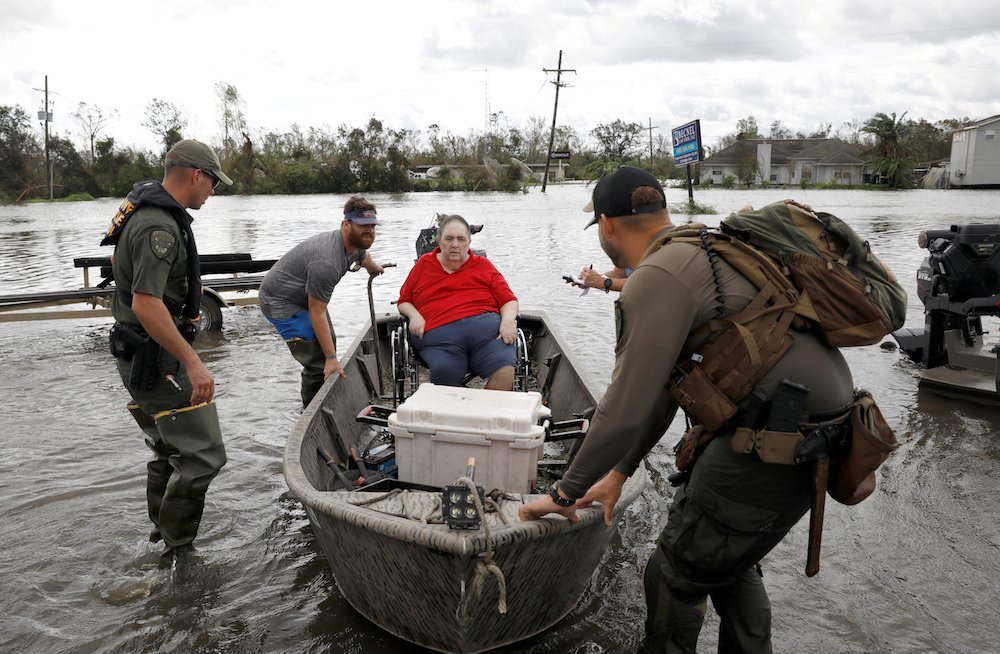 Editor's note: This story has been updated with new information throughout.

Catholic Charities in and around the areas of Louisiana and Mississippi affected by Hurricane Ida — one of the most powerful storms to hit the continental U.S. since Hurricane Katrina in 2005 — are collecting donations as they prepare to help with the yet-unknown damage caused by the late August storm.

In a televised Aug. 30 meeting with President Joe Biden, Louisiana Gov. John Bel Edwards said he estimated that close to 2 million people are without electricity in the region, though news reports said about 1 million were affected.

Many remained without cellphone service, and at least four deaths had been confirmed by Aug. 31. A 71-year-old man is missing but presumed dead after his wife reported that he'd been attacked by a large alligator while walking the flood waters surrounding their home in Slidell, Louisiana, the St. Tammany Parish Sheriff’s Office reported Aug. 30.

The local agency warned those in the affected areas "to be extra vigilant with walking in flooded areas as wildlife has been displaced as well during this storm and alligators and other animals may have moved closer into neighborhoods."

Many Masses Aug. 29 had been suspended in the region as residents prepared to ride out the storm or had evacuated.

Edwards said the damage was "catastrophic" as news outlets showed flooded and destroyed homes, torn roofs and water running through Louisiana streets like a rushing river.

Biden said he asked the Federal Aviation Administration to work with electricity providers in Louisiana and Mississippi to use surveillance drones "to assess Ida's damage to energy infrastructure." 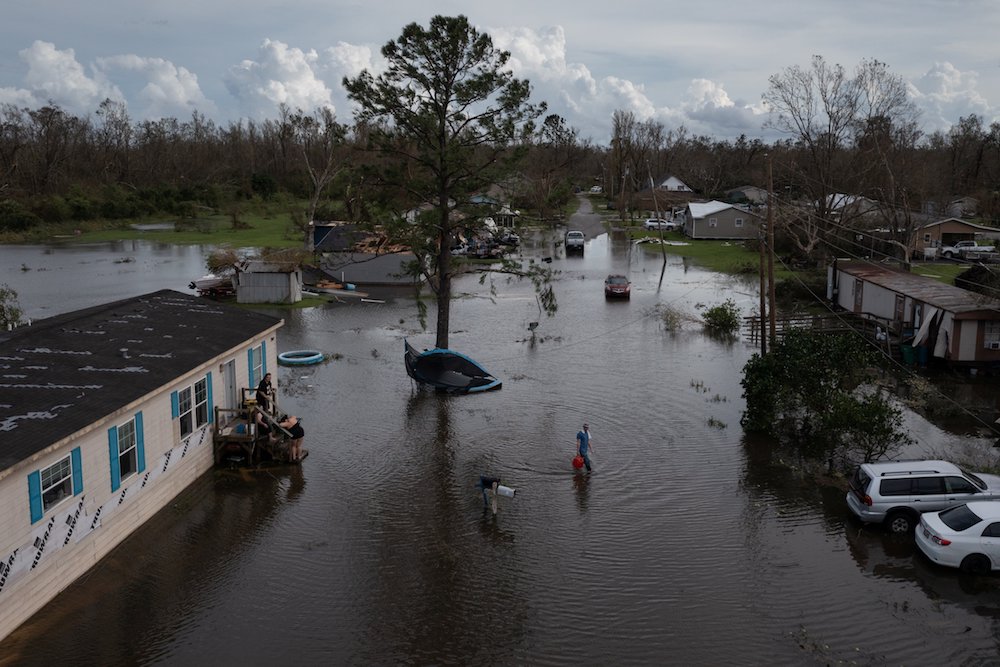 A man in Cut Off, La., walks back to his home after sharing fuel with his neighbors for their generator Aug. 30, in the aftermath of Hurricane Ida. (CNS photo/Adrees Latif, Reuters)

Though the hurricane had torn through much of Louisiana as a Category 4 storm on Aug. 29, the following day it was heading — as a downgraded but still life-threatening tropical storm —toward Mississippi and then Tennessee, where flooding was the main concern.

As levees in Louisiana seemed to have stood up to Ida's wrath, many on social media urged the public to keep in mind that help would be needed in small agricultural towns, not just for damage to New Orleans.

Catholic dioceses and organizations said they were mobilizing to help as soon as conditions allowed.

"Our local #disasterresponse teams will be ready to hit the ground when it's safe to do so," tweeted Catholic Charities of Baton Rouge, a few hours after the storm hit New Orleans.

"We are counting our blessings today that our teams are safe and all of our facilities weathered the storm without catastrophic damage," said Dr. Richard Vath, chief executive officer of Franciscan Missionaries of Our Lady Health System in Baton Rouge.

"We stand ready to support our health care colleagues in southeast Louisiana at the same time we continue providing care in our own communities," he said in an Aug. 30 statement. "Everyone pulls together in these circumstances, and we are working closely with the state of Louisiana and prepared to receive evacuated patients if necessary."

The Diocese of Houma-Thibodaux, Louisiana, in an Aug. 30 message on its website and social media channels, said its schools "will be closed until further notice." The New Orleans archdiocese also announced that its schools and main administrative offices would be closed until at least Labor Day.

In a Facebook video Aug. 30, Peter Finney, editor of the Clarion Herald, newspaper of the Archdiocese of New Orleans, said Archbishop Gregory M. Aymond, who remained at his residence during Ida, was trying to contact pastors to assess the extent of the damage to churches and schools.

"There's nothing really right now to report, but he'll have much more of an understanding today," Finney said. "He asked for prayers for the entire community and please stay safe."

Catholic Charities of Southwest Louisiana in Lake Charles offered 900 meals for Hurricane Ida evacuees, remembering how they, too, had been helped by neighboring states during last year's hurricane season.

The Diocese of Beaumont, Texas, which suffered damage from Hurricane Laura in late August 2020 said Bishop David L. Toups "has invited all of our priests and faithful ... to pray and intercede for our brothers and sisters in Louisiana. We stand with them in prayer during the storm and will stay by them to assist in recovery."

It's hard to know how the hurricane and subsequent storm will affect states in the southern U.S. that already were experiencing a shortage of hospital beds and equipment, including oxygen, because of rising COVID-19 rates.

The day after the hurricane, Lady of the Sea General Hospital in Galliano, Louisiana, reported that part of its roof had been ripped off by Ida's winds. A highway collapsed in Mississippi as the storm made its way north.

"I call on people of goodwill to join me in praying for the safety, well-being, and protection of everyone in these impacted areas. We also pray in a special way for the first responders, health care workers, and emergency personnel who bring relief, comfort, and healing."

The archbishop also encouraged Catholics "and all people of goodwill across the country to stand in solidarity with these impacted communities."

"We entrust all our brothers and sisters in harm's way to our Blessed Mother, and we ask for her continued protection and for her intercession in comforting the those who are suffering," he added.