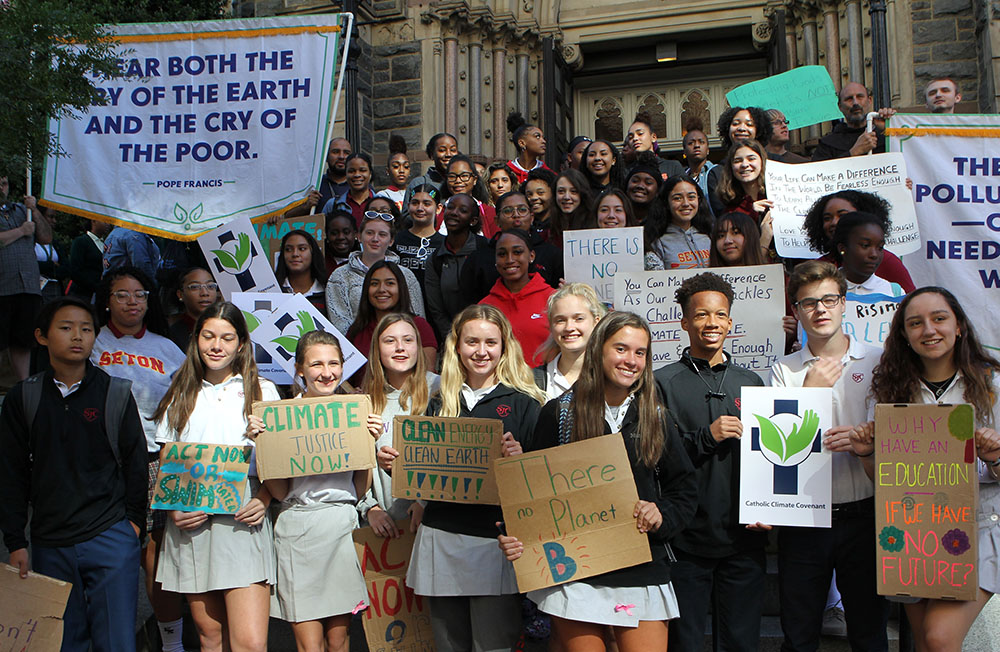 Students from Catholic schools in the Washington Archdiocese stand outside St. Patrick's Church in Washington Sept. 20, 2019, where about 200 of them had gathered to pray prior to the climate change rally in front of the U.S. Capitol. (CNS/Carol Zimmermann)

There is no greater threat to life — human and nonhuman alike — than global climate change. As I have argued before, advocacy on behalf of discrete human populations, such as the unborn or the elderly, will prove futile if there is no habitable planet on which such people can live and upon which all living creatures depend for life. Such uncritical advocacy is like being "pro-fish" by removing them from a lake in which a predator has threatened their survival only to toss them ashore, leaving them to suffocate and die in an environment that is incapable of sustaining their life.

While the outgoing Trump administration has demonstrated nothing but disdain for human and nonhuman life other than its own, the incoming Biden administration is offering us a small sliver of pro-life hope when it comes to climate change, which should be supported and celebrated by Catholics.

The stark contrast between the two approaches to governance is seen in numerous areas, not the least of which is the polar-opposite perspectives each administration has of the 2015 Paris Agreement. The Trump administration provided the requisite one-year written notice of its intention to withdraw the United States from the Paris climate accord, an action that went into effect on Nov. 4, 2020 — the day after the presidential election. President-elect Joe Biden has vowed to rejoin the agreement on his first day as president.

The secretary general of the United Nations, António Guterres, recently stated in an interview that, given the disproportionate power and impact of the United States, humanity's survival would be "impossible" without American participation and leadership in the global effort against climate change. Additionally, the United States is the second-largest emitter of greenhouse gases after China, which places a greater spotlight on its international responsibility to model alternative policies and practices to reduce carbon emissions.

One of the most promising signs of the Biden administration's seriousness in resuming the United States' global leadership role has been the announcement of former Secretary of State John Kerry as "special presidential envoy for climate," which is a newly created cabinet-level position that also includes a place in the president's important National Security Council. The choice of Kerry — who is, like Biden, also a Roman Catholic — reflects the incoming administration's prioritizing of the existential threat climate change poses not only to the future of life on this planet, but also the national security risks such changes pose in the interim. 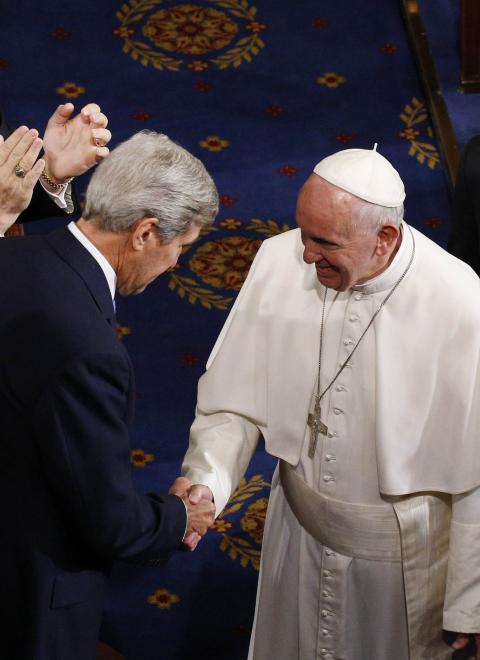 Pope Francis shakes hands with then-U.S. Secretary of State John Kerry as the pope enters the House of Representatives Chamber to address a joint meeting of Congress at the U.S. Capitol in Washington Sept. 24, 2015. (CNS/Paul Haring)

While serving as President Barack Obama's secretary of state, Kerry helped negotiate the Paris Agreement. Since his departure from public office in 2016, Kerry has worked to organize a bipartisan domestic and international coalition called "World War Zero" designed to increase awareness of the rising threat of climate change while also enlisting experts to help strategize best responses.

Unlike the U.S. Conference of Catholic Bishops, whose elected leadership signaled a continued desire to push an adversarial and partisan culture-war agenda in its collective engagement with the Biden administration, Pope Francis, in his congratulatory call to Biden last month, emphasized areas of common ground between the church's social teaching and the Biden administration's priorities, including "addressing the crisis of climate change."

Francis, who played a significant spiritual and nongovernmental role in promoting the Paris Agreement in 2015, issued his influential encyclical letter "Laudato Si', on Care for Our Common Home" the same year. The pope has recently renewed his call for nations to adhere to the Paris Agreement, stating in September, "We need to do everything in our capacity to limit global average temperature rise under the threshold of 1.5°C enshrined in the Paris Climate Agreement, for going beyond that will prove catastrophic, especially for poor communities around the world."

The incoming Biden administration appears poised to implement many of the policies and practices that align with Francis' repeated calls for personal and collective "ecological conversion" as expressed in Laudato Si'. With Kerry as the lead American diplomat charged with overseeing and implementing the administration's proposed climate plan, I have hope that progress is possible in response to this existential threat, provided climate deniers, anti-intellectual Republicans, and fossil-fuel industries are kept at bay.

Last week, economist and journalist Nishan Degnarain wrote a lengthy article in Forbes in which he listed 10 actions the climate envoy can take to win the climate war. The article is well-argued and outlines both the opportunities and pitfalls that face the incoming climate envoy.

It got me thinking about the Catholic perspective and the many ways in which the impending administrative changes align well with the vision outlined in Laudato Si'. There are many resonances, but here I want to offer an illustrative set of five key alignments.

Taking science seriously: One of the hallmarks of Laudato Si' is the way in which it frankly and responsibly draws on the best of scientific evidence for "what is happening to our common home," as the first chapter describes it. The Biden administration shares with Francis a commitment to taking seriously scientific research and data. Unlike the Trump administration's overt antagonism toward science and promotion of a dangerous culture of anti-intellectualism, the incoming Biden administration embraces expertise and scientific research in formulating policies and responding to crises.

Environmental justice for poor and marginalized: One of the key themes of Laudato Si' is that of "integral ecology," which calls for a paradigm shift in how we approach issues of society and the natural environment, recognizing their inherent relationship and interconnectedness. The Biden administration's proposed climate plan is titled "Plan for a Clean Energy Revolution and Environmental Justice." Citing recent atrocities like the water crisis in Flint, Michigan, the plan explicitly acknowledges how climate change and pollution disproportionately affect poor and minoritized communities and the need to correct such injustices.

Intergenerational solidarity: Francis builds on the work of his pontifical predecessors when he writes in Laudato Si': "Intergenerational solidarity is not optional, but rather a basic question of justice, since the world we have received also belongs to those who will follow us." Anyone who has seen the powerfully symbolic image of then-Secretary of State Kerry signing the Paris Agreement on behalf of the United States will recall that he held his 2-year-old granddaughter on his lap, signaling the importance of this global pact as a matter of justice for future generations.

Economy in dialogue for human fulfillment: Finally, in Laudato Si', Francis reemphasized the centrality of the common good as the foundational principle of governance and international cooperation. He has written that "profit cannot be the sole criterion" when it comes to decision making, but that concern for the environment and "the most vulnerable members of society" should be key. The Biden administration has proposed a number of "clean energy" and economic initiatives aimed at sustaining dialogue between the economy and the environment, striving to connect our coordinated response to climate change with economic justice and growth.

[Daniel P. Horan is the Duns Scotus Professor of Spirituality at Catholic Theological Union in Chicago, where he teaches systematic theology and spirituality. His recent book is Catholicity and Emerging Personhood: A Contemporary Theological Anthropology. Follow him on Twitter @DanHoranOFM, and join him for a free Facebook Live event for a discussion about the column at 11 a.m. CST on the day a new column is published.]

A version of this story appeared in the Jan 8-21, 2021 print issue under the headline: Climate agenda reflects Laudato Si'.