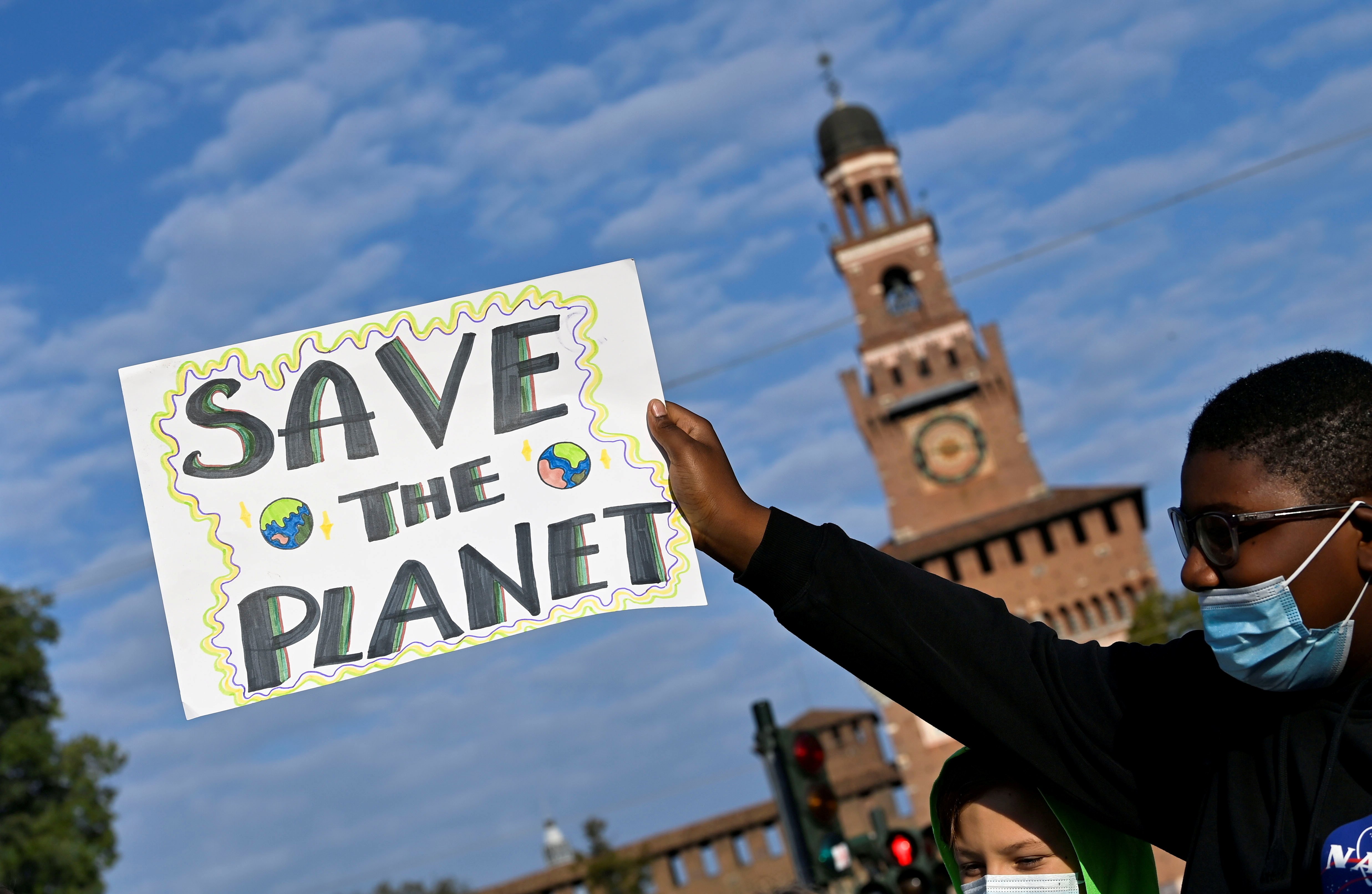 A demonstrator holds up a sign as he attends a Fridays for Future climate strike Oct. 1 in Milan, Italy, ahead of the U.N. climate change summit in Glasgow, Scotland. Some 20,000 delegates are expected to attend COP26, which is being hosted by the United Kingdom along with Italy. (CNS/Reuters/Flavio Lo Scalzo)

In 17 days, the United Nations climate change summit, COP26, is set to begin in Glasgow, Scotland.

The two-week (Oct. 31-Nov. 12) conference, delayed a year by the coronavirus pandemic, has long been billed as a critical checkpoint in the global effort to limit the planet's warming to 1.5 degrees Celsius above preindustrial times — a key threshold to avoid the most devastating impacts of climate change.

Scientists have said in order to keep that goal in sight, drastic cuts in global greenhouse gas emissions, at least a 45% overall reduction, need to be made this decade.

As it stands, global emissions are set to rise 16%, the Earth has already warmed roughly 1.1 C, and current national climate pledges place the planet on a path to heat by 2.7 C by the end of the century.

All of this will garner great attention in Glasgow.

Some 20,000 delegates, and thousands more activists and advocates, are expected to attend COP26, which is being hosted by the United Kingdom along with Italy. Count many Catholics — albeit no longer the pope — and religious leaders and activists among them.

Although some may question why the faith community should be concerned about what happens in the often complex, confusing and jargon-filled world of international climate negotiations, Catholics who will be in Glasgow say there are many reasons for people of faith to pay attention to the proceedings.

"We need to pray about it. We need to raise our voices about it," she said, "and we need to become informed, and we need to also change our individual and community behavior."

Reason #1: Pope Francis cares (as do many faith leaders)

For more than two years, the Vatican has been preparing for COP26 and considering what contribution it could make to help ensure a successful summit.

Pope Francis has frequently referenced the climate conference in speeches and messages to world leaders and global gatherings. Addressing the Vatican diplomatic corps in February, the pope said he hoped the Glasgow summit "will lead to effective agreement in addressing the consequences of climate change. Now is the time to act, for we are already feeling the effects of prolonged inaction."

On Oct. 4, the feast of St. Francis of Assisi, Francis convened nearly 40 religious leaders at the Vatican to sign a joint appeal to participants at COP26. In the statement, the faith leaders called the climate crisis "a grave threat" and urged those in Glasgow "to take speedy, responsible and shared action to safeguard, restore and heal our wounded humanity and the home entrusted to our stewardship."

Lutheran Bishop Thomas Schumacher in his comments that day emphasized the unusualness, and significance, of the gathering: "I want to make this rather clear — this is not a meeting that we have every day, and that we were looking for a topic and thought we could talk about climate change." 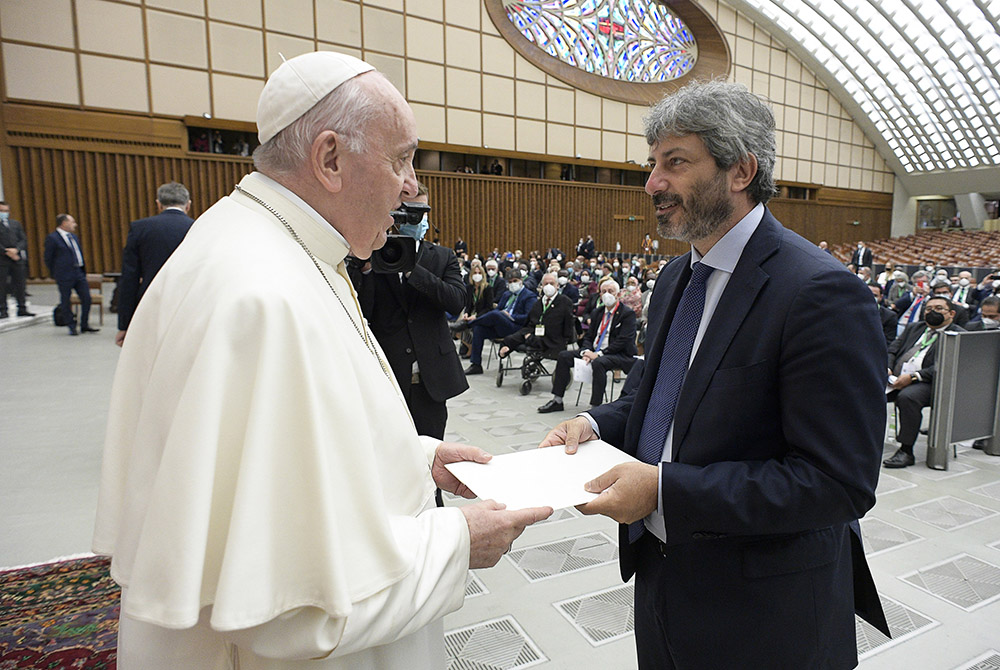 Pope Francis greets Roberto Fico, president of the Italian Chamber of Deputies, during a meeting of legislators at the Vatican Oct. 9 in advance of the U.N. climate summit in Glasgow. (CNS/Vatican Media)

The faith leaders also committed to take actions within their own religious communities by emphasizing ecological education, raising awareness of climate science and taking measures to become more sustainable. Within the Catholic Church, those efforts are encapsulated within the Laudato Si' Action Platform, which is set to launch on Nov. 14, or just days after COP26 ends.

And while Francis is no longer expected to be present in Glasgow — the Vatican will send a delegation headed by Cardinal Pietro Parolin, the Vatican secretary of state — he has continually raised the issue of climate change with global leaders visiting the Vatican, including outgoing German Chancellor Angela Merkel and U.S. House Speaker Nancy Pelosi.

The pope is also expected to raise climate issues when he meets with President Joe Biden Oct. 29 before the U.S. leader heads to Scotland.

Gold said Francis is one of the few leaders today with a global stature, "and he, in a sense, does not take sides. He's only concerned with the Earth and, in effect, the common good. So he can speak on behalf of that voice that's often so absent in these negotiations."

Reason #2: Paris Agreement wasn't the end, but a beginning

In 2015, nearly every nation on Earth adopted the Paris climate accord, where for the first time all countries, not just the most industrialized ones, committed to reducing their greenhouse gas emissions.

But the Paris Agreement only put the overall goals on paper; it did not include specific measures of how to get there. Instead, each nation agreed to present its own emissions-reduction plans, called nationally determined contributions or NDCs, and update them every five years. Updates were to be presented at COP26 in December 2020, but the conference was postponed until November because of the pandemic.

Much of the time since 2015 has been spent crafting the rulebook that spells out what countries can, and cannot, count in determining their emissions reductions. Much debate has centered on actual reductions versus "net zero," where a country or company offsets some portion of emissions by purchasing reductions elsewhere. 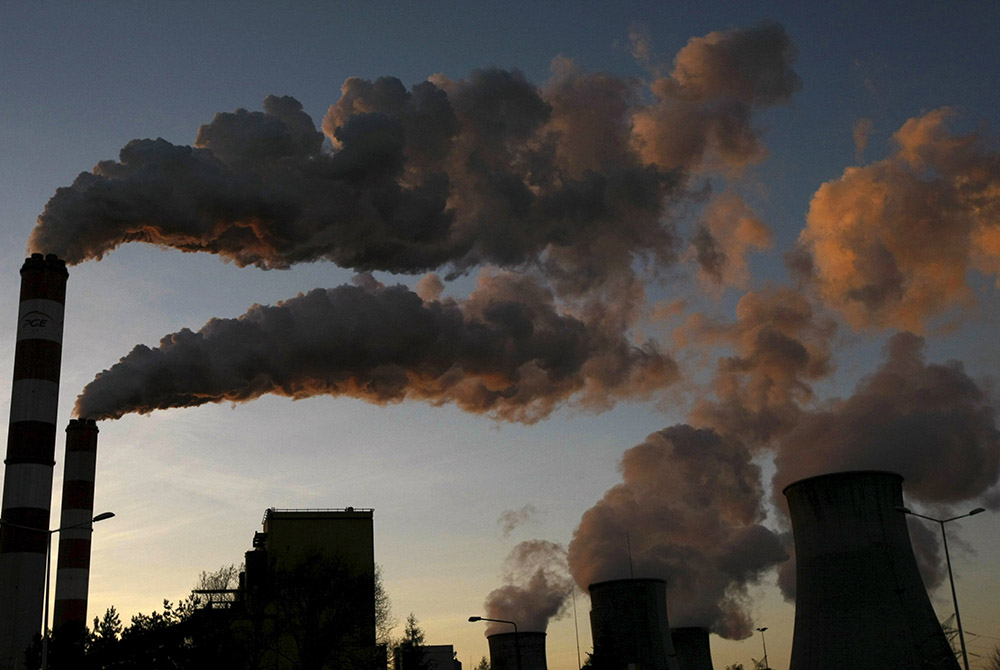 Smoke billows from the chimneys of power plant in 2014 in Belchatow, Poland. (CNS/Reuters/Kacper Pempel)

"That's why the rulebook is so important," Gold said. "It has to make sure that there's no double counting between different countries … and that these are actual reductions."

Along with submitting new, more ambitious emissions-reduction pledges and the focus on the 1.5 C target, other important issues on the table will be delivering on pledges of financing to help less-industrialized nations adapt to and mitigate climate change, to the tune of $100 billion annually, and sending a clear signal that the world is moving past the era of fossil fuels.

But while consequential, COP26 isn't an endpoint, said Alistair Dutton, chief executive of SCIAF, the Catholic relief and development agency in Scotland.

Reason #3: Catholic social teaching is on the table, especially for the poor

Name a principle of Catholic social teaching — from the dignity of every person, to solidarity and workers' rights — and you will find it relates to the discussions at COP26, said Sr. Veronica Brand, who represents the Religious of the Sacred Heart of Mary at the U.N. 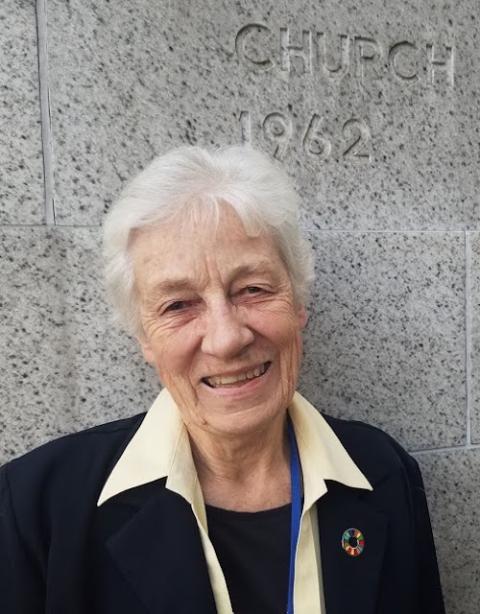 Sr. Veronica Brand represents the Religious at the Sacred Heart of Mary at the United Nations (GSR file photo)

Religious and environmental advocates stress the injustice that climate change presents: The people suffering most from global warming have contributed least to the problem and have fewer resources to adapt and respond.

"And in every country, it is the poorest who get hit harder … who don't have the means or resources to cope or stop themselves being hurt by these climatic events when they happen," Dutton said.

Faith communities have prioritized holding countries to the 1.5 C target, along with assuring financing for developing countries and pressing governments to commit to "loss and damage" compensation for communities already decimated by climate change.

Cecile Kern, global policy and research advocate with Mercy International Association, said it's important to recognize that "the climate crisis is not simply a climate crisis" but also a social and economic one.

"Issues related to food security or housing and homelessness or migration are all interlinked with the degradation of Earth. And so issues that are near and dear to people every day, and relevant to their daily life experience, are probably in one way, shape or form related to the changing climate," and with it, decisions made at COP26, she said.

"We are a moral voice. We are holding states up to account for this moral crisis that we're faced with," she said.

Reason #4: The climate is not waiting for governments to agree

While world leaders and diplomats debate and hash out details of the Paris Agreement, average global temperatures have continued to rise, with increasingly evident impacts.

The six hottest years on record have occurred since 2015 when the Paris Agreement was reached, and many parts of the world have been hit by extreme weather — heat waves accompanied by wildfires and severe storms and flooding — that scientists link to global warming.

"These things are happening now on such a frequent basis that they're not even making news," Gold said.

The costs of climate change are adding up, too, with extreme weather causing an average of $202 million a day in damages in the past half-century, according to the World Meteorological Organization.

If countries continue to delay substantial cuts in emissions, the economic costs, in addition to the toll on human life and biodiversity, are expected to only rise higher. 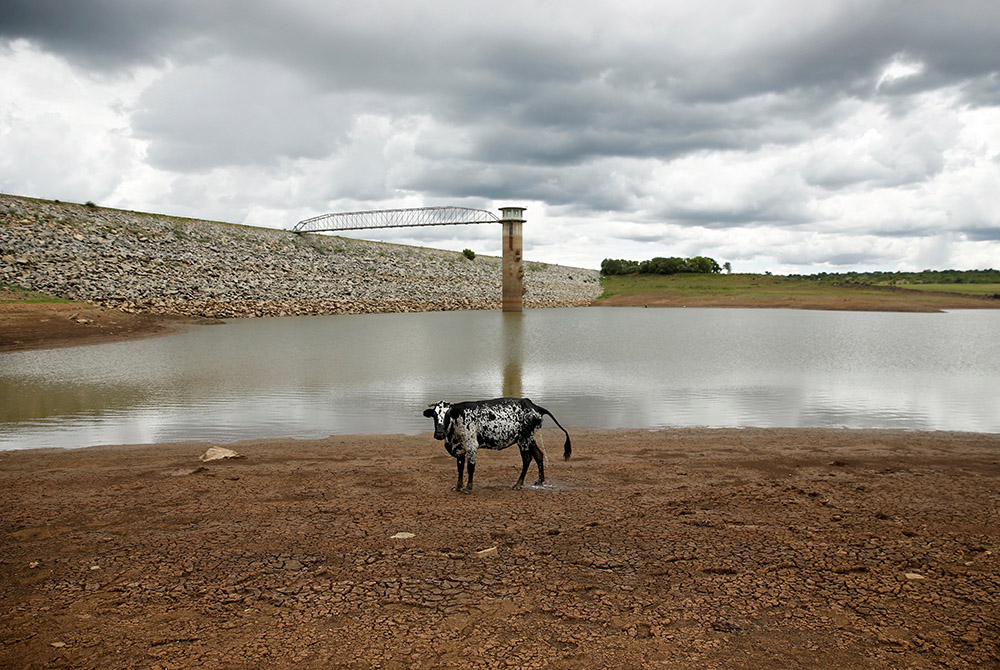 A cow stands on caked mud before a small patch of water at a dam Jan. 18, 2020, as the region deals with a prolonged drought near Bulawayo, Zimbabwe. (CNS/Reuters/Philimon Bulawayo)

Although COVID-19 delayed the climate conference, many see the forced pause as an opportunity, especially for accelerating the global transition to clean energy necessary to achieve the 1.5 C target.

Because of that, COP26 has taken on added importance, and how countries invest to re-boost their economies will be critical, said Neil Thorns, director of advocacy for CAFOD, the official development agency of the Catholic Church of England and Wales.

"Is it going to be spent on jobs which are green and sustainable? Is it going to put the poorest at the heart of that money? Are we going to make sure that the most vulnerable groups are protected and nurtured?" he asked.

What countries pledge in Glasgow — and the legislation backing it up, such as the European Union's Green Deal and the climate provisions in the multitrillion-dollar bills in the U.S. Congress — will be key signals for how the post-pandemic world will turn on climate action.

"Pope Francis says to us you don't come back the same, you either come back better or worse. And we want to make sure we come back better," Thorns said of COP26. "And that means greener, it means more sustainable and it means protecting the people and the planet going forward."

This story appears in the COP26 Glasgow feature series. View the full series.
A version of this story appeared in the Oct 29-Nov 11, 2021 print issue under the headline: 5 reasons why Catholics should care about the COP26 climate summit. 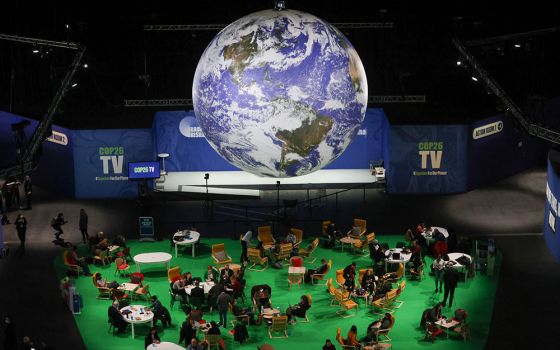 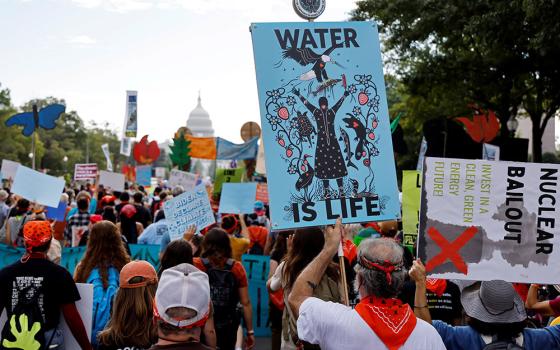 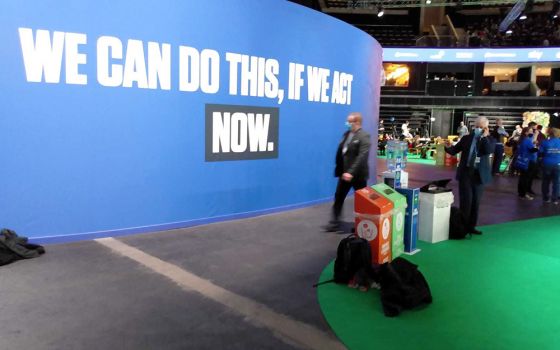 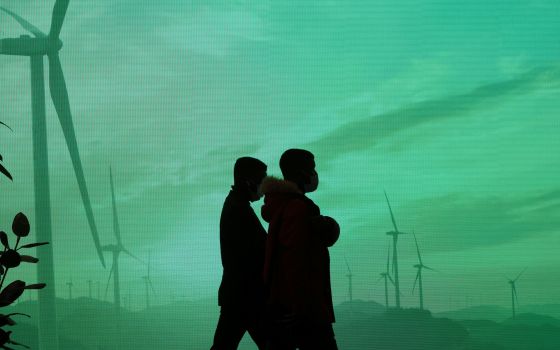