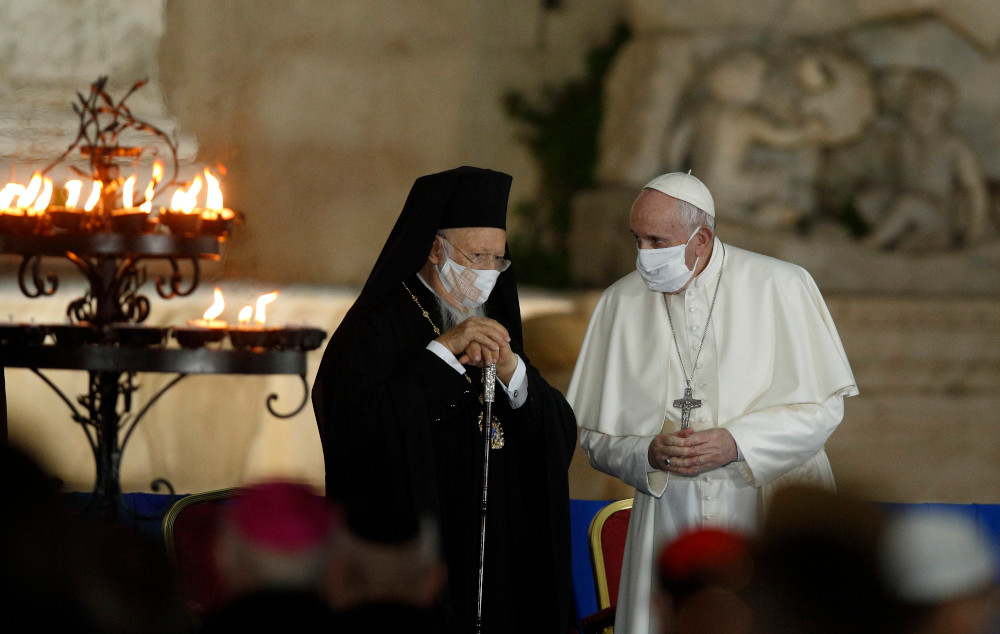 Paying tribute to Ecumenical Patriarch Bartholomew of Constantinople for his contributions to the theology and spirituality of care for the environment, the Franciscan-run Pontifical University Antonianum awarded him an honorary doctorate.

"Today we want to express our gratitude for your inspired commitment on behalf of the environment, that environment that, with the eyes of faith, we recognize as the work of the omnipotence of God, friend of humanity," said Fr. Michael Perry, minister general of the Franciscans.

While Perry handed the award to Patriarch Bartholomew at the Oct. 21 ceremony in Rome, the Orthodox leader was first lauded by: Cardinals Pietro Parolin, Vatican secretary of state; Peter Turkson, prefect of the Dicastery for Promoting Integral Human Development; and Kurt Koch, president of the Pontifical Council for Promoting Christian Unity.

Bartholomew, Parolin said, has a "completely unique" relationship of "synchronicity" with Pope Francis as seen both in their writings and also from their visits together to the Holy Land in 2014, to the refugee camps on the Greek island of Lesbos in 2016 and to Egypt in 2017.

The patriarch's "life and ministry, his intellectual work, the priorities he has chosen to promote, his ecclesiastical ministry and spiritual work — all of it resounds as an integral, holistic commitment at the service of the human person, of creation, which is our common home, and, ultimately, of God the creator of heaven and earth," Cardinal Parolin said.

Accepting the honor, Bartholomew said that as part of a Christian's duty to safeguard and spread the faith, "our church was a pioneer in initiatives on critical global questions like the care of creation and social justice. In the last decade, the world has seen alarming environmental degradation with climate change.

The loss of biodiversity and the polluting of natural resources together with a growing gap between rich and poor," he said, are "signs of the time," requiring the world's attention and concrete action.

In 1989, Bartholomew's predecessor, Patriarch Dimitrios, issued the Orthodox Church's first pastoral letter on the ecological obligation and launched the World Day of Prayer for the Care of Creation, a commemoration later adopted by the World Council of Churches and by Francis for the Catholic Church and Archbishop Justin Welby of Canterbury for the Anglican Communion.

"For us, taking care of the natural resources of our planet is a matter of being truthful before God and the created order," the patriarch said. "This is why we repeatedly condemn environmental abuse as nothing other than a sin."

"We must remember that caring for creation is not primarily a political or technological or economic question," he said, "it is first of all a religious and ethical question" since God created the world.

"It is inconceivable to claim to be concerned about the human person while destroying his home [the earth] and vice versa," he said. "For us, the protection of the natural environment and true respect for one's neighbor are two sides of the same coin."