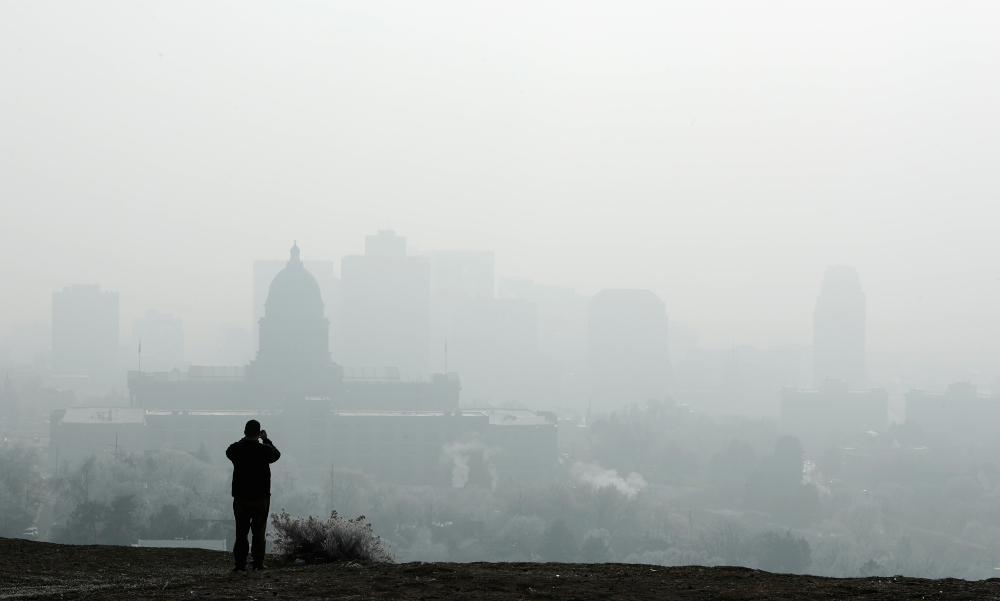 A man stops to take a picture of the Utah State Capitol and buildings that are shrouded in smog in downtown Salt Lake City Dec. 12, 2017. (CNS photo/Reuters/George Frey)

Editor's note: This story originally appeared in Capital & Main and is republished here as part of Covering Climate Now, a global journalism collaboration strengthening coverage of the climate story.

A little-discussed section in President Biden’s groundbreaking executive order on climate aims high. For the first time in federal policy, it pairs the urgent issues of leaking greenhouse gases with the creation of new jobs for energy workers and people who live in heavily-polluted neighborhoods.

The order proposes to “create well-paying union jobs and more opportunities for women and people of color in hard-hit communities, including rural communities, while reducing methane emissions, oil and brine leaks, and other environmental harms from tens of thousands of former mining and well sites.”

Advocates have long argued for exactly this objective: fossil fuel legacy cleanup combined with equity. “This happened as a result of the environmental justice movement doing work for years,” says Martha Argüello, executive director of Physicians for Social Responsibility in Los Angeles. “There are so many jobs in the restoration of the harm that has been done.”

More than 3 million abandoned oil and gas wells across the United States are not properly sealed. They are leaking more than 280,000 tons of a gas, methane, that is responsible for a quarter of the disruption of the global climate we have seen so far, according to the federal government. California is splattered with some 35,000 inactive wells at risk of leaking, according to an investigation last year by the Los Angeles Times and the Center for Public Integrity.  You can see the leaks in aerial imagery, bright-colored plumes spiraling up from points on the land where oil companies drilled for oil and gas for years and then walked away. A well that is improperly sealed can leak for decades.

A handful of scientists and engineers know just how bad the situation is, and Riley Duren may know better than anyone. He is a research scientist at the University of Arizona and a lead on projects that have flown hundreds of flights, in a lawnmower pattern, over stretches of the planet and especially California, searching for signs of these climate hazards. “They’re like invisible wildfires,” he says.

There’s a focus on spotting the bad sites because so-called super-emitters of methane may account for 10 percent of all the climate impact of greenhouse gas emissions so far, an astonishingly high figure. That explains why permanently sealing old wells became important enough to be announced as a priority on the new administration’s seventh day. But experts say that plugging wells is complicated and will present a series of obstacles, both jurisdictional and labor-related, if the administration follows through and tries to sharply ramp up this work.

The executive order created an interagency working group under the Department of Energy, which met for the first time on February 26, the day after Secretary Jennifer Granholm was confirmed. Also, during the annual energy conference CERAWeek, Granholm mentioned the creation of an Office of Energy Jobs — Jennifer Jean Kropke is listed as chief of that new office on the DOE’s website.

But it turns out there’s no immediate path for the federal government to simply order the cleanup of old wells.

“When you have a federal regulation, it will only apply to wells on federal land,” not private property or state land, said Eric Witten of Witten Engineering, a veteran engineer who has plugged some 200 wells in Southern California. The state agency that regulates wells in California agrees the federal government doesn’t have much to say about sealing up old wells that aren’t on federal land.

But it is possible the administration could have “a significant impact,” by using a section of the Clean Air Act, said Sean Hecht, co-executive director of the Emmett Institute on Climate Change and the Environment at UCLA Law School. It may be able to use §111(d), a part of the law that deals with existing, as opposed to new emitters, and compels states to create their own plans. In this case that could be a plan to eliminate methane from leaking wells.

Beyond the issue of authority is finding workers with the right qualifications. Witten says other companies frequently refer work to him because so few firms do this type of work anymore in Southern California.

Some of the skills required are forensic, tracking down well owners. Often those are not the same as landowners. Mineral rights owners can be a third party on any cleanup. Witten pores over hundred-year-old engineering documents. Occasionally the 19th century wells he is plugging are even cased in redwood. They date back to before steel was available in the Southwest.

Each old well is unique due to geology and human approach. But the general idea is to recreate a strong pipe, perforate the bottom with holes, then pump concrete hundreds of feet down the hole, so that concrete flows out those holes, into the surrounding rock, sealing up spaces between the pipe and the rock. That way gases can’t flow back to the surface.

Large oil services firms like Halliburton and Schlumberger own their own rigs and employ engineers for the work. But with California oilfields in slow decline, these firms have moved on. “When they leave the wells behind, they take their employees with them,” Witten said.

To replenish the trade with new workers is not easy, since few community colleges offer targeted training programs. Several people said the best training is done on the job, like apprenticeships. “But that social infrastructure is gone now,” he said.

Outside of Southern California, the skills are easier to come by.  Jon B. “Brett” Bennett founded an organization in Texas, Native State Environmental, that raises money and channels it into plugging wells. The need was obvious, he said. “We were plugging shallow, older wells, and I found out how bad the problem really was.” There are 140,000 inactive wells in Texas, according to Bennett. Leaving them inactive can be convenient for a company because they are easily brought back online in the right market. This is true throughout the country. But idle wells are the ones most at risk of being left to leak with no one in charge.

“Plugging those could put a lot of people to work,” Bennett said. If there were a stream of dollars out of Washington aimed at stopping leaking wells, there are plenty of service companies, he said.

“There is a large cadre of people on the sidelines looking for work,” Andrew Barry agreed. He is senior vice president of marketing, U.S. business development and training for Wild Well Control, which specializes in problem wells, engineering and training.

Workers with these skills have been sitting out because until recently, oil prices were down due in part to the pandemic. Drillers went bankrupt, and there is a creeping shadow over the industry’s credit prospects partly due to climate change risk. It is getting harder for companies to borrow.

Since people with the right training are available for work, a major push by the administration to plug wells wouldn’t necessarily lead to local training and hiring, Barry thinks. Sealing wells is short-term work. For that, he said, “You bring the skills you need to the location.” And then you leave.

Back in California, Ingrid Brostrom at the Center on Race, Poverty & the Environment said that scenario is exactly what her organization is hearing about the well-fixing activity currently underway. Even without a push to address the problem comprehensively, a number of states have laws that are trying to shorten the list of problem wells. Brostrom is hearing that contractors do not necessarily hire locally.  Her organization sponsored legislation introduced in the California Legislature Feb. 17 that would ban fracking. Less noticed in that law was a provision that directs the California Geologic Energy Management Division (CalGEM) to “identify oil and gas workers who have lost their jobs and offer incentives to well remediation contractors” to hire them –– similar to the idea in the federal executive order.

But for the vision of climate justice advocates to be realized, incentives would have to be strong enough to address the way companies hire and deploy now. As for the idea of hiring people from highly polluted communities, none of what’s been laid out so far addresses them. The plumes of destructive gases, meanwhile, continue. “Every time we fly over Inglewood oil field,” in Los Angeles, Duren said, “we see at least a couple of sources.”