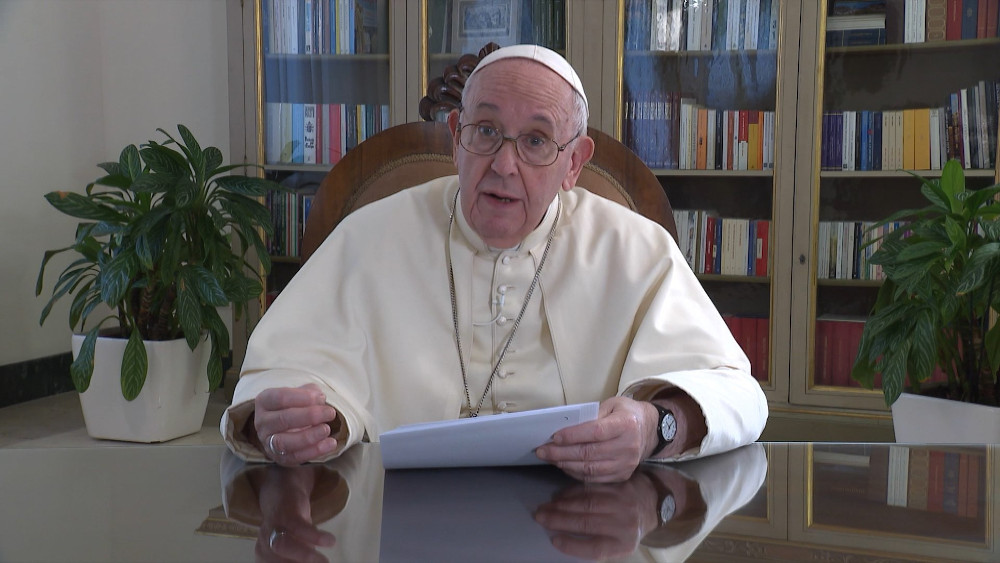 Pope Francis speaks in a recorded message for the TED event, "Countdown," in this still frame from a video released by the Vatican Oct. 10, 2020. The pope joined the global virtual event in support of solutions to climate change. (CNS/Vatican Press Office)

The predominant global economic system is "unsustainable," particularly in its impact on the environment, Pope Francis said.

"We are faced with the moral imperative — and the practical urgency — to rethink many things" about the economy: "how we produce, how we consume, our culture of waste, its short-term vision, the exploitation of the poor, indifference toward them, the increase of inequality and its dependence on harmful energy sources," the pope said Oct. 10 as part of the global TEDx Countdown on climate change.

In an Oct. 10 speech, part of a global TEDx Countdown on climate change, Pope Francis said "everything in the world is connected and that, as the pandemic has reminded us, we are interdependent on one another, and also dependent on our mother Earth." (TEDx)

The event, broadcast live on YouTube, featured more than 50 speakers from around the world presenting "actionable and research-backed ideas, cutting-edge science, and moments of wonder and inspiration," according to the program description.

With scientists, climate activists, actors, singers, poets, politicians and comedians, the program looked at the state of the environment, predictions about how little time is left to alleviate climate change and about the role of individuals, businesses and governments in taking action.

"As the term 'countdown' suggests, we must act urgently," Francis said. "Each one of us can play a valuable role if we all set out today — not tomorrow, today."

"Science tells us, every day more precisely, that we need to act urgently — I am not exaggerating — this is what science tells us, if we are to have any hope of avoiding radical and catastrophic climate change," he said. "This is a scientific fact."

As he did in his 2015 encyclical letter, Laudato Si', on Care for Our Common Home, Francis insisted in his TEDx talk that concern for the environment must go hand in hand with concern for the people who live on the Earth, especially the poor, who are most impacted by climate change and natural disasters.

People must make a choice "between what matters and what does not, a choice between continuing to ignore the suffering of the poorest and mistreating our common home, the Earth," he said, or "commit ourselves at every level to transforming the way we act."

While science insists on the need to change to protect the planet, he said, "our conscience tells us that we cannot be indifferent to the suffering of the poorest, to growing economic inequalities and social injustices." 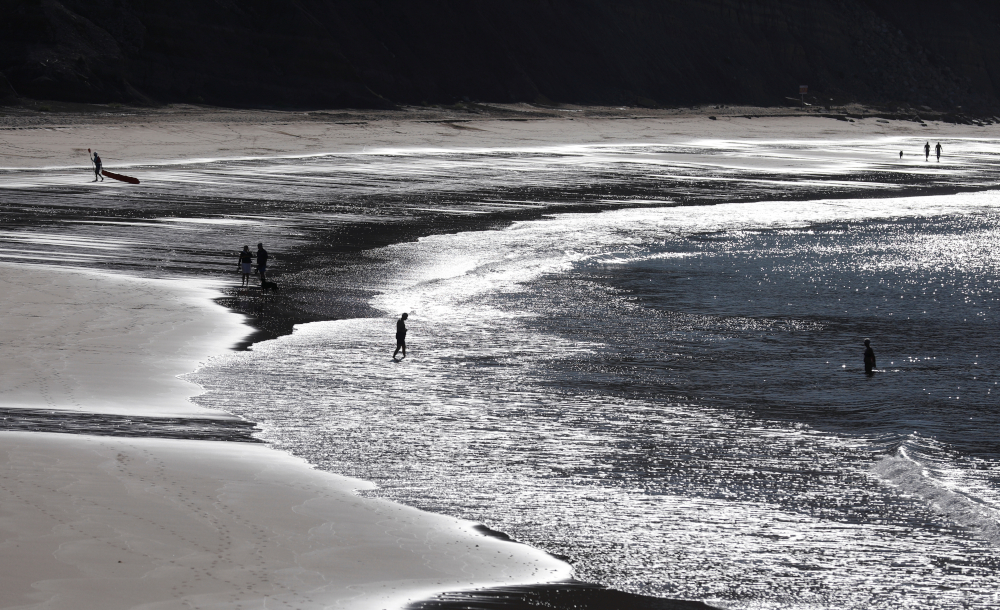 People walk along Portugal's Praia da Luz beach on World Environment Day, June 5, 2020. Presenting a three-part action plan, the pope said change must begin with "education for the care of our common home, developing the understanding that environmental problems are linked to human needs."(CNS/Reuters/Rafael Marchante)

Francis asked his global audience to begin "a journey of transformation and action," one "made not so much of words, but above all of concrete actions that cannot be postponed."

"It will be necessary to go step by step," he said, "to help the weak, to persuade the doubtful, to imagine new solutions and to commit oneself to carrying them forward."

The pope explained that the "integral ecology" he has called for — responding to the cry of the poor and the cry of the Earth — requires seeing how "everything in the world is connected and that, as the pandemic has reminded us, we are interdependent on one another, and also dependent on our mother Earth."

So, he said, education must include both scientific data and ethics.

Next, he said, priority should be given to water and food, ensuring access to safe drinking water and adequate food for all the world's people.

"The third proposal is that of energy transition: a progressive replacement, but without delay, of fossil fuels with clean energy sources," he said. "This transition must not only be rapid and capable of meeting present and future energy needs, but also must be attentive to its impact on the on the poor, on local populations and on those who work in the sector of energy production."

Socially responsible investing and stockholder activism, he said, can make companies see "the unavoidable need to commit themselves to the integral care of the common home."

The pope recommended divesting from stock in "companies that do not meet the criteria of integral ecology and rewarding those that are making concrete efforts in this transition phase to put at the center of their activities criteria such as sustainability, social justice and the promotion of the common good."