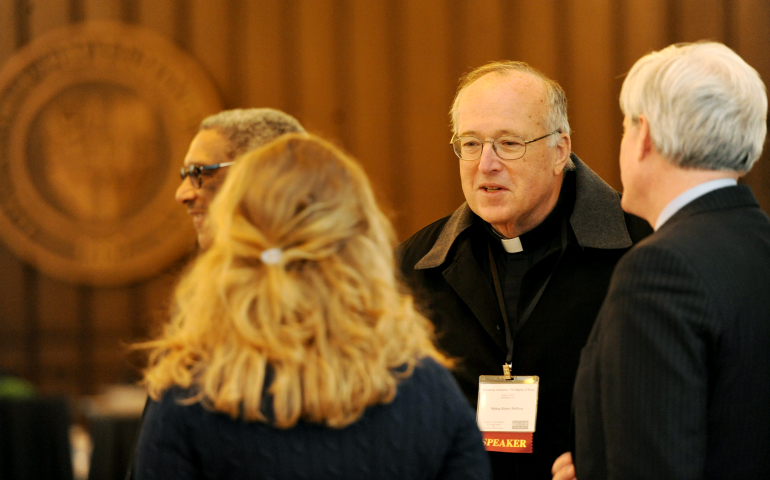 The symposium at The Catholic University of America, in which a bishop and cardinal shared the stage with organized labor and academics exploring themes of social justice, was an important and timely step in returning the church in the United States to a right relationship with the culture, especially workers, and themes essential to human dignity.

After reading Julie Bourbon's account of "Erroneous Autonomy: The Dignity of Work," sponsored by the Institute for Policy Research & Catholic Studies at Catholic University of America, we urge you to read the full text of speeches by Bishop Robert McElroy of San Diego and Boston's Cardinal Sean O'Malley. To hear the other talks, video of the event can be found here.

McElroy, who is emerging as the most eloquent U.S. episcopal interpreter of the economic and social justice vision that Pope Francis has espoused, framed not only the discussion at the conference, but the conversation we must have as a faith community at this time in American history.

With confirmation hearings for Donald Trump's Cabinet appointees the backdrop for the Catholic University event, McElroy said, "We are poised to witness in the United States a return to public policy which moves aggressively to establish market mechanisms within ever more expansive realms of national life."

Denunciations of the unfettered market are as old as Catholic social teachings, and have been key features of papal teaching from Pope Paul VI's Populorum Progressio ("On the Development of Peoples") through Popes John Paul II and Benedict XVI. Francis' unique eloquence has renewed focus on the issue. He has said that those who defend trickle-down economic theories and assume that free markets and all economic growth bring greater justice demonstrate "a crude and naive trust in the goodness of those wielding economic power and in the sacralized workings of the prevailing economic system."

McElroy spells out the way forward: "The church must work in the coming months with unions, workers, the elderly and the poor to counter the growing imperialism of market mechanisms within American public life."

If the symposium represented a step in the right direction, it also indicates the distance that has grown between current church leadership and the convictions that once were second nature to members of the bishops' conference. In 1986, after years of consultation with theologians and economists, the U.S. bishops issued a pastoral letter, "Economic Justice for All," that was a deep treatment of the topics dealt with during the recent symposium. In June 2012, with the U.S. still wobbling from the economic meltdown of 2008, the bishops appointed a committee to write a statement with a working title of "The Hope of the Gospel in Difficult Economic Times: A pastoral message on work, poverty and the economy." It did not have an auspicious beginning.

That was a presidential election year and the economic plan for the Republican ticket, Mitt Romney and Paul Ryan, would cut taxes, reduce non-defense spending and move toward privatization of Medicare and Social Security. A number of bishops did not want their pastoral message to become too political. Some warned against implicitly criticizing Republican budget policies. Archbishop Joseph Naumann of Kansas City, Kan., asked that the message note the importance of the private sector in job creation.

When presented at their November meeting, the statement failed to pass because of opposition from a few bishops who remembered the 1986 statement. The new statement, in fact, made no reference to "Economic Justice for All." Retired Archbishop Joseph Fiorenza of Galveston-Houston denounced the 2012 draft pastoral as a betrayal of Catholic social teaching.

Despite its title, the 2012 document devoted only a single sentence to the right of workers to organize. "I fear that this draft, if not changed in a major way," will harm the U.S. bishops' record on Catholic social teaching, Fiorenza said. It would be "lampooned" in the Catholic academic world, he said.

Many in church leadership today would be happy with a pastoral statement on work that makes no mention of unions and welcomes a greater reliance on market forces. Fr. Robert Sirico, who heads the Acton Institute, a prominent free-market think tank, knew he would face little episcopal backlash when he described on Twitter McElroy's talk as "economic illiteracy posing as piety."

At the Catholic University event, Richard Trumka, AFL-CIO president, warned that over the next few years "we will be tested," and the best advice came from theologian David Cloutier: "Organize or die."

What we must do over the next four years, if not easy, is clear. We must dig deep into our Catholic social teachings to re-establish our foundations. We must stand with the working class, the elderly, children and the poor. We must form alliances with unions and community organizers, and advocate for public policies that say " 'Thou shalt not' to an economy of exclusion and inequality."

A version of this story appeared in the Jan 27-Feb 9, 2017 print issue under the headline: Our task for the next four years.