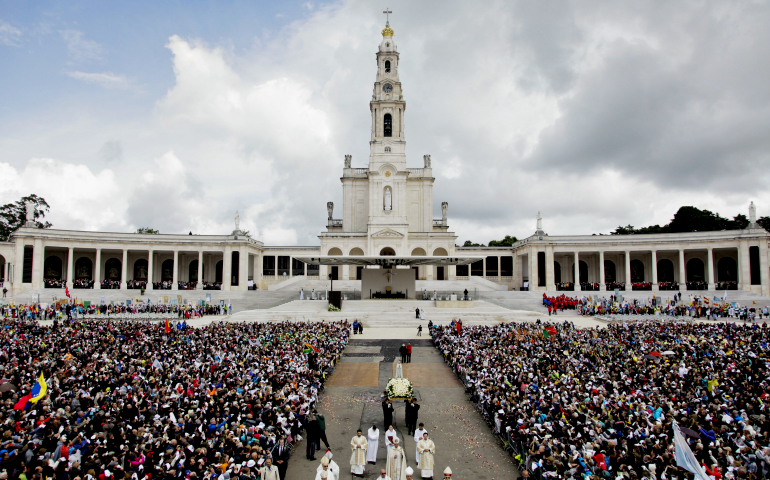 A statue of Our Lady of Fatima is carried through a crowd in 2016 at the shrine of Fatima in Portugal. (CNS/EPA/Paulo Chunho)

Pope Francis is undertaking a very different kind of papal trip at the end of this week. Unlike many of the other visits of his pontificate, he is not expected to focus on interreligious dialogue or to bring some grand geopolitical message.

Instead, the pope will be making a little Marian devotion. He will be visiting Fatima, the site in Portugal where three shepherd children reported seeing Mary in a field in 1917, sparking a century of reverence tinged with controversy.

Vatican spokesman Greg Burke told journalists in a briefing May 5 that more than a usual apostolic visit, the pope's May 12-13 trip would resemble "an apostolic pilgrimage."

Although the Portugal visit may not carry the drama of some of the pope's earlier sojourns — think of the security concerns surrounding his recent April trip to Muslim-majority Egypt, for example — several theologians told NCR it fits well into the arc of his papacy, particularly his focus on nonviolence and peace.

That's because when 9-year-old Lúcia Dos Santos and her cousins Jacinta and Francisco Marto first reported seeing Mary on May 13, 1917 — three years into the gruesome World War I then destroying Europe — they said she had told them to pray the rosary every day for an end to the fighting.

Mary was "breaking into a time of great social upheaval," said Natalia Imperatori-Lee, a theologian who has focused her research on the interplay of Mariology and ecclesiology. "There's a lot that's parallel to our current situation."

"A lot of people who are suffering; a lot of migration; a lot of death and famine," Imperatori-Lee, an associate professor at Manhattan College, ticked off the list of similarities.

"It's pretty timely that he's doing this now," she said.

Aurelie Hagstrom, an associate professor at Providence College who specializes in Mariology, asked rhetorically: "What might attract [Francis] to the Fatima message?"

"Because he speaks about war a lot," she answered. "And the message of Fatima includes the admonition to pray for peace."

In the past two years, Francis has said many times that the powers around the globe appear to be fighting what he calls a "piecemeal world war." He also focused his message for 2017's World Day of Peace on nonviolence as a political strategy.

Emphasizing the pope's desire to act as if on pilgrimage in Portugal, the Vatican has given the visit the slogan: "With Mary, pilgrim of hope and peace."

In an additional sign of pilgrimage, Francis will also not even stop on his way to the Sanctuary of Our Lady of Fatima to visit Lisbon, the Portuguese capital and only about 75 miles southwest of the shrine.

Upon landing at an air base near the devotional site May 12, the pope will head straight to the chapel built over the spot where the three children reportedly saw Mary.

Francis will spend the first evening in prayer at the sanctuary, reciting the rosary along with crowds expected in the millions. On the next day, he will celebrate an outdoor Mass where he will also canonize the Marto siblings, who both died only a few years after seeing Mary.

Dos Santos became a nun and died in 2005 at the age of 97. The controversy surrounding Our Lady of Fatima stems from Dos Santos' memoirs, in which she said she and the other children were told three secrets by Mary.

The first two secrets were revealed by Dos Santos in the memoirs. They concerned a vision of hell, taken by many as a prediction of World War II, and a need for the world to pray.

The third secret, originally not revealed by the nun, inspired decades of conspiracy theories about what it revealed. In 2000, the Vatican said the secret was a prediction of the May 13, 1981, assassination attempt against Pope John Paul II in St. Peter's Square.

John Paul credited Our Lady of Fatima with saving his life that day, saying it was evident "a mother's hand" had deflected would-be assassin Mehmet Ali Agca's four bullets so they did not kill him.

Imperatori-Lee, who has written about practices of Catholic popular devotion across Latin America, also said Francis' visit to Fatima may indicate his comfort with different local expressions of faith as a native Argentine.

"One thing that's great about popular devotion is that it differs from place to place," she said. "Latin America has a lot of tolerance for that sort of unity in diversity."

"That seems to carry over for him," she said. "He doesn't really feel a need for uniformity of worship or uniformity of too much [that is] outside of the uniformity that the church should have in its concern for the poor and the outcast and the other."

Local organizers in Fatima are preparing for large-scale crowds ahead of Francis' visit. Carmo Rodeia, communications director for the sanctuary, told journalists at the May 5 briefing that they are expecting 2,000 members of the press to come for the visit, alongside 2,000 priests, 71 bishops, and eight cardinals.

Rodeia also said they are organizing 400 Communion stations for the Mass May 13.

The Vatican said the visit will be Francis' first to Portugal, not counting layovers in the Lisbon airport.

He will give four public addresses during the trip: a homily at the Mass, a prayer May 12, and two short greetings to people in the area. The Vatican said each of the public speeches will be made in Portuguese, another first for the pontificate.

Francis' trip to Portugal will be the 19th international visit of his pontificate and will mark the 28th country he has visited so far. His next scheduled visit is to Colombia in September, although additional visits to South Sudan, India and Bangladesh are also said to be in consideration for late 2017.

A version of this story appeared in the May 19-June 1, 2017 print issue under the headline: Pope Francis' trip to Fatima characterized as a pilgrimage.