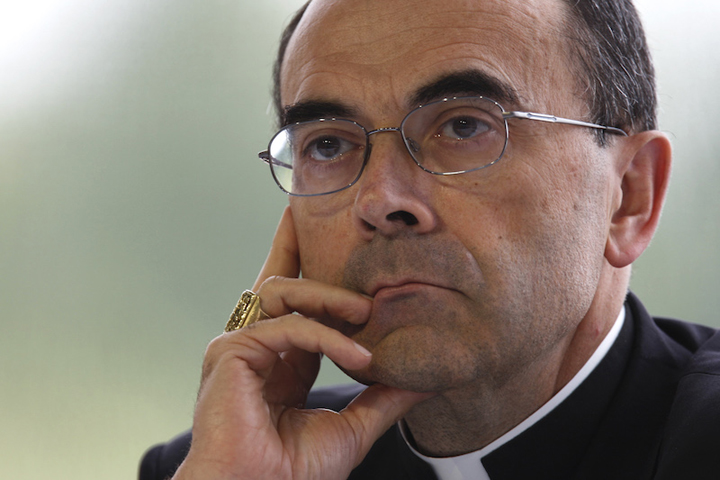 In an interview with BFM TV on March 15, Valls refused to comment on whether Cardinal Philippe Barbarin should step down.

The archbishop of Lyon, Barbarin has been accused of covering up alleged sexual abuse of young Boy Scouts by Lyon priest Bernard Preynat between 1986 and 1991 -- before Barbarin was named cardinal.

Last week, the Lyon prosecutors' office announced preliminary charges against Barbarin and five other members of the diocese for "nondenunciation of a crime."

Preynat was removed from service last year after his accusers came forward.

Meanwhile, France's Le Figaro newspaper reported separate sexual abuse allegations involving another Lyon priest, who has been suspended from his duties but is still serving as a priest.

"Is this the start of a 'Spotlight' a la Francaise?" Le Figaro asked, referring to the Academy Award-winning movie now playing in France.

Identified by an assumed name, "Pierre," the accuser in the initial case -- now a 42-year-old father of two -- said he met Preynat during a pilgrimage to Lourdes. Prosecutors have opened a preliminary inquiry.

Pierre told the newspaper he had approached Barbarin in 2009 after a doctor urged Pierre to press charges.

The cardinal reportedly apologized on behalf of the priest, whom he acknowledged had a "problem," notably earning a year's suspended prison sentence more than a decade ago for exhibitionism.

Contacted by the newspaper, the priest said he had "no memory" of the alleged incident.

For his part, Barbarin has steadfastly denied any cover-up, an argument he repeated on Tuesday.

"Never, never, never have I covered up any act of pedophilia," he said at a press conference in Lourdes.

The cardinal said he had suspended the second priest of his duties "until justice has been done."