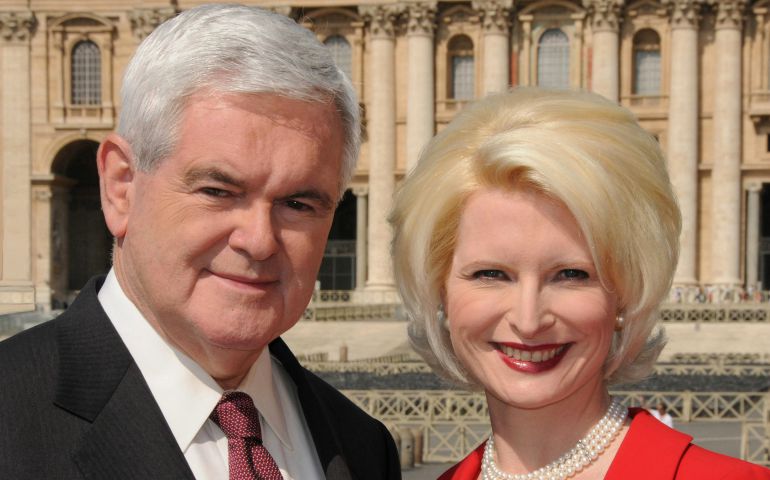 The White House late Friday announced President Donald Trump's intent to nominate Callista Gingrich, wife of former House speaker Newt Gingrich, to serve as U.S. ambassador to the Holy See. The announcement came in a brief statement just days before Trump is due to visit with Pope Francis at the Vatican May 24.

Gingrich is a former congressional staffer who worked in the 1990s for the House Committee on Agriculture. She is Newt Gingrich's third wife and has served as the president of Gingrich productions, a multimedia company founded by the pair.

If confirmed by the Senate, Gingrich would succeed Ken Hackett as ambassador.

Hackett served in the role from August 2013 through Jan. 20, when Trump took office. He had previously been the president of Catholic Relief Services for 19 years and was also a recipient of the University of Notre Dame's Laetare Medal, considered one of the most prestigious honors given by a U.S. Catholic institution.

Prominent Catholic scholars gave Gingrich's appointment mixed reviews. One noted expert on U.S.-Vatican relations said Gingrich would be "the most extraordinarily unqualified" ambassador to the Holy See in U.S. history.

"I don't think she has any experience in this," said Jesuit Fr. Gerald Fogarty, a professor of religious studies and history at the University of Virginia.

Fogarty noted that there was already tension between Trump and Francis in 2016, when the future president called the pope "a political person" for celebrating Mass on the U.S.-Mexico border and Francis questioned Trump's Christianity over his support for a wall on that border.

"I'm just shocked that they didn't find somebody that could maybe pave the way a little bit more, to smooth things over," said the Jesuit.

Stephen Schneck, a Catholic political philosopher who has been involved in the Democratic Party, said that while Gingrich might not bring international or Vatican expertise to the role her personal relationship may help her ensure that important issues in Vatican-U.S. relations receive attention from the White House.

"Through her husband Newt she's going to have the kind of juice to be able to get attention from the White House on important policy decisions that need top-level U.S. action," said Schneck, who recently retired as director of the Catholic University of America's Institute for Policy Research and Catholic Studies.

Hackett's tenure in Rome was marked by a number of major events, including former President Barack Obama visiting the Vatican in March 2014, Francis visiting the U.S. in September 2015, and the U.S. embassy complex moving into new, more modern facilities near Rome's prestigious Via Veneto.

Should Gingrich receive Senate approval, she would become the eleventh U.S. ambassador to the Holy See since the two entities established formal relations under President Ronald Reagan in 1984. She would be the third woman to serve in the role, following Lindy Boggs, a former Congresswoman, and Mary Ann Glendon, a lawyer.

Schneck said he sees similarities between Gingrich's appointment and President Bill Clinton's decision in 1997 to appoint Boggs to the role.

The retired professor said Boggs originally came to prominence as being the wife of House Majority Leader Hale Boggs and as the mother of Thomas Hale Boggs, Jr., a well-known Washington lobbyist.

"By all accounts, Lindy ... did a good job as Vatican ambassador," he said. "I think we can have a little bit of hope that it works out that way with Mrs. Gingrich."

Fogarty, however, disagreed. He said there was "absolutely not" a similarity between the appointments of the two women.

Noting that Boggs represented Louisiana in the House of Representatives from 1973-91, the Jesuit historian said: "She had served in Congress, so she at least had some standing on her own, whereas Callista really doesn't."

"[Boggs] knew how to handle the office over there while she was ambassador," said Fogarty. "I don't see where Callista has any experience that would qualify her, other than being married to Newt."

It took the Senate two months in the summer of 2013 to confirm Obama's naming of Hackett. Once Gingrich receives Senate approval, she will need to present her credentials to Francis in a formal ceremony that normally occurs within the first months of an ambassador's official appointment.

Schneck noted there may be substantial differences of opinion between the Vatican and Trump's administration that Gingrich will have to handle.

"It's a huge dis-juncture [between] the vision that this pope has for the church and Catholics for our role in the world and the vision and the campaign promises of this president," said the professor.

"There are some really hot-button issues where there are going to be some difficulties," he continued. "I would imagine that the Vatican ambassador will on many occasions find herself right in the middle of that controversy."