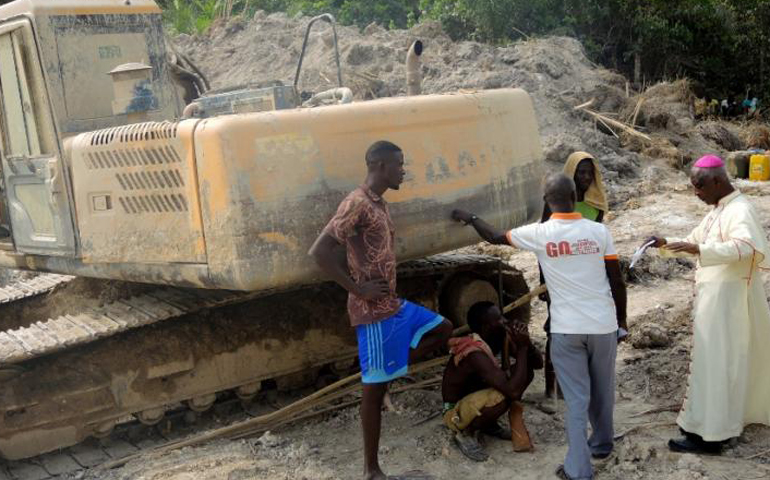 Bishop Afoakwah speaks with the "galamsey" miners to try to determine who gave them permission to mine on church land. (GSR/Melanie Lidman)

Global Sisters Report presents a special series on mining and extractive industries and the women religious who work to limit the damage and impact on people and the environment, through advocacy, action and policy. Pope Francis last year called for the entire mining sector to undergo "a radical paradigm change." Sisters are on the front lines to help effect that change.

Bishop John Yaw Afoakwah is furious. In his celebratory white cassock, he picks his way carefully through shoulder-high mounds of dirt and deep puddles to approach the man with a gun sitting in front of the bulldozer. Two Chinese engineers catch sight of a reporter with a camera, accompanying the bishop, and dash into the bush.

In front of the bulldozer is a massive pit, surrounded by three other bulldozers and a mobile crusher. Shacks housing the Ghanaian workers are perched at the edge of the pit, with a few kids darting among them.

One might expect that Ghana's illegal gold mining would be carried out hidden from public view, surreptitiously, quietly.

But behind the local Catholic clinic, in this village of a few hundred farmers, is an enormous illegal gold mine out in the open. The bishop had planned to build a nursing hospital at this site. But now the area is filled with the detritus of gold mining: destroyed agricultural land and, even more dangerous, improperly disposed cyanide and mercury that cause myriad health problems.