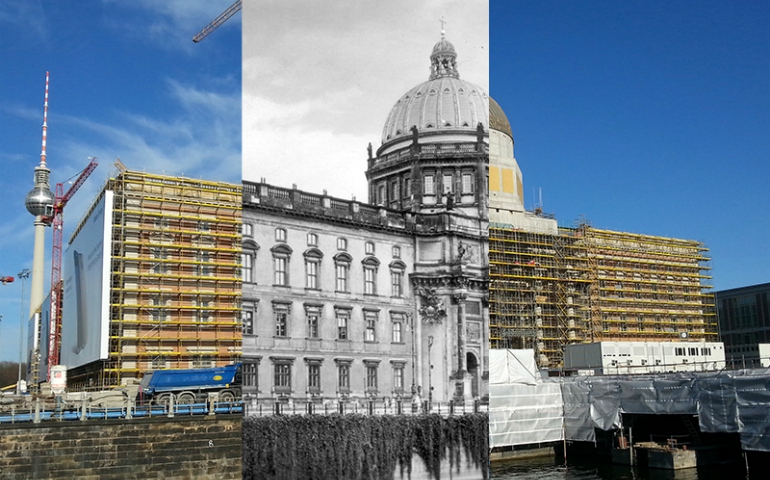 A 1920s image of the Berlin City Palace is overlaid on the final stages of construction on March 24, 2017. (Courtesy of Creative Commons)

Berlin is a city haunted by history. It is constantly debating what to do with the reminders of its Nazi past, its communist legacy or its Prussian kings and imperial kaisers.

Now there's a dispute about one of its oldest symbols of all — the cross.

The debate arose because the reconstruction of the City Palace (Stadtschloss), the central Berlin winter residence of those kings and kaisers that was heavily damaged in World War II and demolished by East Germany's communist leaders in 1950, is moving into its final phase.

The foundation overseeing the project announced last month that an unnamed donor had pledged funds to top off its imposing cupola with the same gilded Christian cross that stood there until the old palace was torn down.

This has sparked a lively public debate in Berlin, a traditionally Protestant city where two-thirds of the residents don’t belong to any church and there may be more Muslims than Catholics.

Opponents of the cross — mostly on the political left —argue that the reconstruction, while resembling the massive original palace on the outside, will be mostly modern inside and display non-European artwork now exhibited in smaller museums around the city.

"It's supposed to be a public building where everyone feels welcome," said Sigrid Hupach, culture spokeswoman for the Greens in the German Parliament, which is housed in another Berlin landmark, the Reichstag.

"But how can there be an open dialogue of cultures if a cross up on the cupola shows what direction it should go in?"

Berlin's churches, as well as some conservative politicians and the business elite, have defended the cross, some vociferously.

"These hedonistic leftists and Greens, who have no interest in Christian culture, have seized the moment to denounce the cross," fundraiser Wilhelm von Boddien complained.

The communists, he said, "stood for an atheist state that limited religious freedom wherever it could. Their successors have no right to protest like this."

Germany's Central Council of Muslims said it has no problem with a Christian symbol. "The cross belongs on the cupola because the building has a historical context and that’s related to Christianity," its chairman, Aiman Mazyek, said.

If Berlin wanted something different on the cupola, he added, it should consider putting up a symbol combining the Christian cross, Muslim crescent and Jewish Star of David.

Even the city's atheist association pitched in with the suggestion that the rebuilt palace, due to open in 2019, should be topped with a microscope to symbolize science and reason.

Debates like this have erupted almost every time that Berlin has had to decide what to do with the monumental buildings left over from its past.

After the wall fell and Germany was reunified in 1990, nobody wanted to move into the fascist-style building designed for Hermann Goering's aviation ministry, or the huge headquarters of Hitler's central bank, which later housed the Communist Party’s central committee.

But they offered lots of usable office space to government ministries moving back from Bonn, the old West German capital. The finance ministry reluctantly took over the former, and the foreign ministry the latter, which it spruced up with a modern front building hiding the older entrance.

The City Palace has been especially controversial because it is the only building reconstructed from scratch. East Germany had planted its modern Parliament there in its place, and some east Germans protested when it was torn down in the 1990s.

In addition, the campaign to resurrect the royal residence seemed to be driven by nostalgia for the old kingdom of Prussia, which to many Germans stands for the militarism that led to World War II.

But, in fact, the old East German Parliament was an asbestos-filled eyesore and the reconstructed baroque palace fits in better among the imposing Protestant cathedral and classical museums built around the same square on Berlin's Museum Island in the Spree River.

One of the leading defenders of the cross is Richard Schröder, a theologian and leader among the East German Protestant pastors who guided the democracy movement that finally forced the Berlin Wall open in 1989.

Schröder, who has also been a Social Democratic parliamentarian and head of the theology faculty at Berlin’s Humboldt University, likes to remind Germans that Prussia was also a multicultural and multireligious kingdom that took in the Protestant Huguenot refugees from France and had a large Jewish minority.

Although he has been active raising funds for the palace project, he is no apologist for the old authoritarian monarchy.

"With the cross atop his palace, the Prussian king was also thinking of the divine right of kings that he invoked against popular sovereignty and democracy," Schröder said.

"That's the way it was, that's the way he was and no iconoclasm can change that. But we cannot act as censors of history in reconstructing the palace. Otherwise, we'll end up with Orwell's Ministry of Truth."

As for a different symbol for the cupola, he recalled that in 1938, the Nazis put a swastika in place of the cross over the Wartburg, the castle where Martin Luther translated the New Testament into German.

"They had to put it back a few weeks later because there was so much protest," he said.

And if the new museum in the palace is supposed to display the range of world cultures, he said, "then our European contribution to that is undoubtedly influenced by Christianity."

Protestant Bishop Markus Dröge said the cross was a sign of reconciliation and noted that Christians, Muslims, Jews and atheists had gathered in a Berlin church last December for a memorial service for the 12 people killed outside it when a militant Islamist drove a heavy truck through the crowded Christmas market.

"Whoever rebuilds and simply leaves out what they don't like destroys the historical context and betrays a skewed understanding of history," he said.

Catholic Archbishop Heiner Koch said the cross was "the sign of the good news of the Christian faith for all people" and should not become a political football.

"By putting the cross on the cupola, its builders showed they had a special responsibility to be rulers accountable to God," he said. "Even today, recalling this attitude would mean a lot for Berlin."