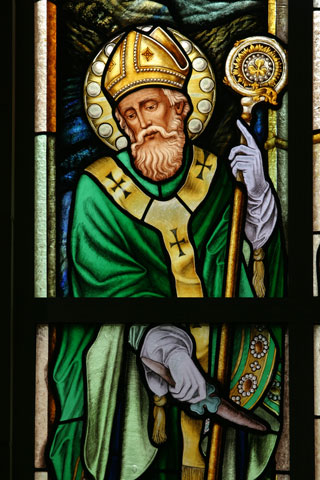 St. Patrick's Day is now a big celebration on multiple continents, but how did it get going? Patrick, who died in 461 A.D., didn't launch the festivities himself. Instead, it was a 17th-century Franciscan priest, Luke Wadding, who made sure that Patrick was given a feast day. This day, of course, developed into a riotous yearly tribute -- surely more celebratory than Wadding intended.

The pious Wadding was born on Oct. 16, 1588, in the city of Waterford, on Ireland's southeastern coast. Entering a wealthy and well-connected family, he received a fine classical education and became fluent in Latin as a child. Hardship came his way at age 14, however, when both of his parents died.

An older brother took charge of his situation and sent him to an Irish seminary in Lisbon, Portugal. There he began a novitiate at age 17, and was ordained by the Franciscan Order as a priest at age 25. He later relocated to Spain, where his eloquence and erudition won him the attention of King Philip III, who sent him as part of a delegation to Rome.

In Rome, he would make his greatest impact. He established the College of St. Isidore, which educated Irish priests who left Ireland because of anti-Catholic suppression by the British. Many of these students would become martyrs upon returning to their homeland.

When organized Irish rebellion arose in the 1640s, Wadding supported the cause, arranging for thousands of pounds of ammunition and bundles of money to be sent to Ireland. After some initial success, the Irish rebels were crushed mercilessly by the forces of England's Oliver Cromwell.

Though Ireland as a nation was being oppressed to a severe degree, Irish scholars on the European continent were beginning to carve their niche. Leading the way was Wadding, who wrote abundantly, producing some 50 volumes as an author or editor.

Among this corpus of scholarship was a treatise on the Immaculate Conception, a 16-volume work on the Middle Age theologian John Duns Scotus, and an eight-volume history of the Franciscan order.

Yet all of these writings combined would not prove as influential as Wadding's efforts to make March 17 an official feast day. This day had received some recognition since the 10th century. "But the commemoration was not widespread, even in Ireland," according to James Doherty's article "A Saint Becomes an Occasion," written for the Irish heritage website The Wild Geese.

Wadding used his influence to have Patrick and his March 17 feast day inserted into the church calendar. Such official recognition was, according to Doherty, the "major impetus in the creation of St. Patrick's Day as we know it."

Of course, this contribution would take years to unfold. During his lifetime, Wadding was viewed largely as a scholar and a voice for the Irish in Rome. Reportedly, he received votes to become pope during the papal conclaves of 1644 and 1655. This would make his case as close as the church has come to having an Irish pope. It's very possible that Wadding would not have wanted the papacy.

He rejected offers to become a bishop and even intercepted and suppressed a petition (discovered after his death) that recommended him for the cardinalate. "His preference always was for the quieter pastures of scholarship and research," according to Father Luke Wadding, a commemorative volume released in 1957 by the Franciscan friars.

But the "quieter pastures" of scholarship can be tiring in their own right, especially when combined with constant ecclesiastical duties. Wadding's physical health was strained often, and he was beset by violent recurring headaches for much of his adult life.

Following a brief illness, he died in Rome on Nov. 18, 1657, at age 69. The last 40 years of his life had been spent in Italy, and the overwhelming majority of his years were spent outside a homeland for which he so mightily had campaigned.

The 1913 Catholic Encyclopedia says that every year Wadding had commemorated March 17 with "great solemnity." In the fullness of time, though, St. Patrick's Day would become anything but solemn.

Not until the 20th century, would St. Patrick's Day parades occur in Ireland, where March 17 was acknowledged more as a day of religious obligation. In fact, until recent decades the pubs in Ireland actually were kept closed on March 17. Such was never the case in America, where St. Patrick's Day began as a declaration of Irish-American identity, but often devolved into inebriate mayhem.

The March 19, 1860, edition of The New York Times ran a piece titled "St. Patrick's Day," which relates that: "The policemen had their hands full. Business was lively at the Tombs [the Manhattan Detention Complex]. An unbroken procession defiled through its doorways." Among this procession were "drunken women with infants in their arms" and "men argumentatively disposed to establish logically the fact of their own sobriety."

Despite these hiccups, the festivities not only would endure, but would surface in some unexpected locations. These days, St. Patrick's Day merriment takes place in Russia, Japan, Malaysia and Singapore, among other faraway lands.

In fact, the celebrations actually have gone beyond the planet. In 2011, on board the International Space Station, astronauts -- floating in the air and attired in green -- played the flute and tin whistle.

Amid the spreading revelry, the day's key contributor (aside from Patrick himself) tends to go overlooked. Outside of his native Waterford, most Irish are unaware of Wadding. However, he has received some recent notice: In October 2015, the Irish Voice newspaper ran an editorial on Wadding titled "Waterford man who created St. Patrick's Day is now long forgotten."

But the "forgotten" Wadding's perennial contribution continues to grow. Undoubtedly, it has gone far beyond what the devout Franciscan had in mind.

A version of this story appeared in the Mar 11-24, 2016 print issue under the headline: The Irish Franciscan who gave St. Patrick his feast day.