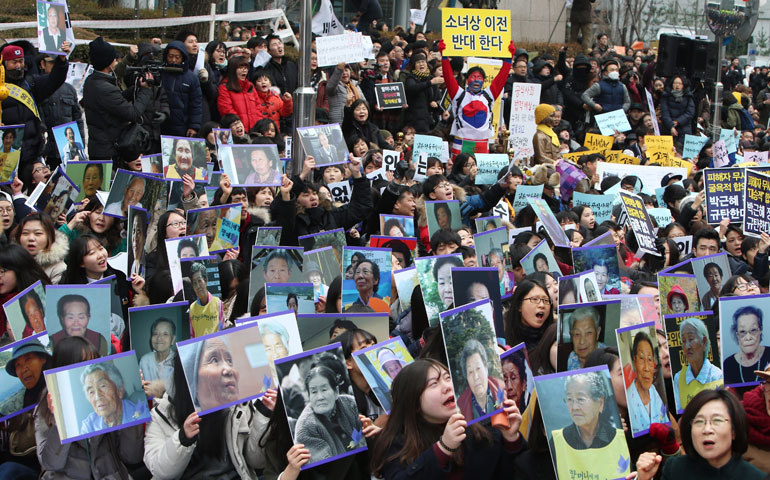 Japanese and South Korean government officials and analysts have praised Japan's apology and offer of compensation for Korean women forced into sexual slavery by Japanese imperial occupiers in the 1930s and '40s. Some say it hails a "new era" in relations between the two East Asian nations.

But activists and church members who have worked with the women for decades expressed disappointment and even anger at the announcement made in late December. They say it does not address the women directly and does not hold Japan culpable for a war crime, two conditions the activists have long called for.

As many as 200,000 women, most of them Korean, were forced to work in brothels run by the Japanese army throughout the Asia-Pacific region before and during the Second World War.

Japanese Foreign Minister Fumio Kishida told reporters Dec. 28 that Prime Minister Shinzo Abe had offered a "heartfelt apology" and that Japan would pay 1 billion yen (US$8.3 million) into a South Korean fund to support women forced into the brothels. Forty-six "comfort women," as they were known, survive in South Korea today. Their average age is 89.

South Korean President Park Geun-hye called the deal, which had been worked out between the two countries' foreign ministers, the "final and irreversible" agreement on this issue.

South Korea and Japan are both close U.S. allies, but their bilateral relationship has been fraught. Japan occupied Korea from 1910 to 1945. Now the two countries "will welcome a new era," Abe said in Tokyo Dec. 28.

Daejeon Bishop Lazzaro You Heong-sik, chair of the Korean Catholic bishops' justice and peace commission, strongly criticized the agreement, saying, "It was not for the victims but for the governments."

Speaking to media Jan. 1 after visiting women at the House of Sharing, a shelter outside Seoul for the surviving comfort women, You said, "If the agreement were for human rights and regaining the damaged reputation of the victimized women, they would be happy and glad, but rather they are distressed and upset."

Activists who have supported the women for decades say the agreement fails to address whether Japan bears legal responsibility for the victims.

"The bilateral agreement is simply not acceptable," said Theresa Kim Sun-shil, a Catholic lay leader and co-chairperson of the Korean Council for the Women Drafted for Military Sexual Slavery by Japan. Every Wednesday for 23 years, the council has led a rally for the women outside the Japanese embassy in Seoul.

"As an activist who has supported and worked for the victims, I felt that the agreement is quite disastrous," Kim told NCR Jan. 3. "We have made clear repeatedly that Japan should admit its systematic involvement in the sexual enslavement of Korean women as a war crime and make an official and direct apology as well as take legal responsibilities, including legal compensation."

She said the apology lacked sincerity, calling it "only lip service."

"The Japanese foreign minister clearly said in a separate meeting that its financial aid, 1 billion yen, is not to be interpreted as legal compensation. So we can't accept it either," she added.

The deal "is more like a collusion between two interest groups, not a normal meeting between countries," he said. "The meeting did not reflect the victims' opinion at all. What they have demanded is not money. But Japan has ceaselessly tried to end it with a simple compensation without bearing legal responsibilities."

Seok told NCR that the Korean government ignored its own people's desires by agreeing to the deal. "I don't know what the government wanted to obtain" through this deal, he said.

The Korean Council for the Women Drafted for Military Sexual Slavery by Japan issued a statement Dec. 29 that said, "Although the Japanese government announced that it 'feels [its] responsibilities,' the statement lacks the acknowledgment of the fact that the colonial government and its military had committed a systematic crime.

"The government had not just been simply involved but actively initiated the activities which were criminal and illegal," the statement said.

The statement said the Japanese government distances itself from its responsibility by not taking ownership of the foundation offering the compensation. "It appears that Japan will pass the future responsibilities on to the government of the victims' country after simply paying off the money."

The council also criticized the agreement for not including what it called "preventative initiatives," such as a truth commission and appropriate history education.

The statement also said, "The Korean government's attitude towards this Agreement, which is vague and incomplete, is rather shocking."

[Paul Hwang is director of the Center for Asia Peace and Solidarity under Woori Theological Institute, a lay-led cooperative in Seoul.]

A version of this story appeared in the Jan 15-28, 2016 print issue under the headline: Korean Catholics say deal over sex slavery 'not acceptable'.