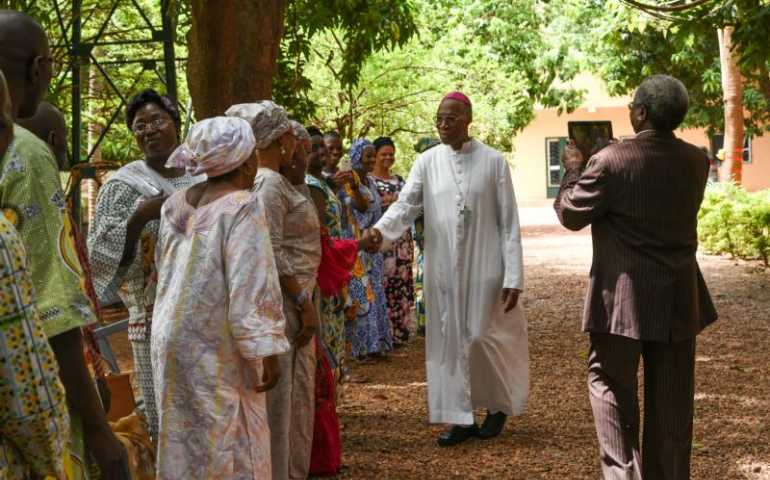 Cardinal-elect Jean Zerbo of Bamako, Mali, the first from the western Africa nation, will use his position to ease the multiple crises facing sub-Saharan regions, an aide said, despite new media accusations linking him to a financial scandal.

Theodore Togo, secretary-general of Caritas Mali, said Cardinal-elect Zerbo's success in building interfaith relations and helping ease tensions between the government and rebel forces has been positive for the nation of 17 million.

"But our own problems are linked to this region's evolving crises, and we're part of a wider picture. What Christians can do for peace and justice here also have consequences elsewhere," Togo said.

Zerbo was to receive his red hat at consistory at the Vatican June 28.

In a June 1 interview with Catholic News Service, Togo said the pope's announcement of Mali's first cardinal May 21 had been "joyfully received" as an opportunity for the church to be "more effective and dynamic in its daily mission," and for the new cardinal to step up his long-standing "engagement in national reconstruction and reconciliation."

The joyfulness of the appointment was marred May 31, however, by reports in France's Le Monde daily and other newspapers, accusing the 73-year-old cardinal-elect of holding secret bank accounts in Switzerland.

Le Monde reported that seven accounts, opened by Mali's Catholic bishops' conference with the British-based HSBC bank in 2002, had been credited with $13.4 million in 2007. The deposits, revealed by a journalists' consortium, Swiss Leaks, had formed a "vast system of fiscal evasion," and were linked to Zerbo and Bishop Jean-Gabriel Diarra of San, the newspaper reported.

Claims that the church leaders had "diverted funds from the Catholic faithful" were rejected by the Malian bishops' conference in a statement, which said June 1 that church money was controlled by an inter-diocesan commission established in 1988 to coordinate pastoral, charitable and catechetical work, and was used "with total transparency."

"The church of Mali accomplishes its mission of evangelization in dignity. It cannot use dirty money to proclaim the Kingdom of God," the statement said.

Ethnic Tuareg rebels seeking to establish a separate state overran most of northern Mali during 2012, operating alongside Islamist insurgents believed linked to al-Qaida.

France intervened with air strikes in January 2013 to halt a rebel march on Bamako, and later handed over security to Malian government forces and a United Nations' military mission.

Under a June 2015 peace deal with the government of President Ibrahim Boubacar Keita, regional assemblies are to be elected, with the rebel fighters integrated into national security forces.

However, attacks have continued since the agreement, delaying the return of 140,000 displaced Malians from neighboring Niger, Mauritania and Burkina Faso.

After six years in parish ministry and seminary teaching, he was ordained a Bamako auxiliary bishop in 1988 and appointed bishop of Mopti in 1994. In June 1998, he was named to succeed Bamako Archbishop Luc Auguste Sangare. He has been lauded for fostering Christian-Muslim dialogue as well as for participating in 2012 negotiations between Mali's military rulers and opposition parties.

In a statement, Keita described Cardinal-elect Zerbo's elevation as a "great honor for the whole Catholic Church in Africa," and said he wished the cardinal "necessary health and discernment" for his new mission.

Togo told CNS that religious leaders had praised Cardinal-elect Zerbo for a conciliatory speech during Keita's September 2013 inauguration, as well as for allowing Caritas Mali to become the region's first Catholic organization to act as official elections monitor.

"Although Mali isn't a Christian country, and our own Catholic community is only small, he encourages everyone, from his brother-bishops down, to engage in dialogue and reconciliation," Togo said.

"And while his main contributions to peace will continue to be felt here at home, he'll certainly also participate in the church's international affairs, depending on which tasks the pope assigns him," he added. "He's an open person, who knows it's possible to advance in a good direction if the right values are in place."