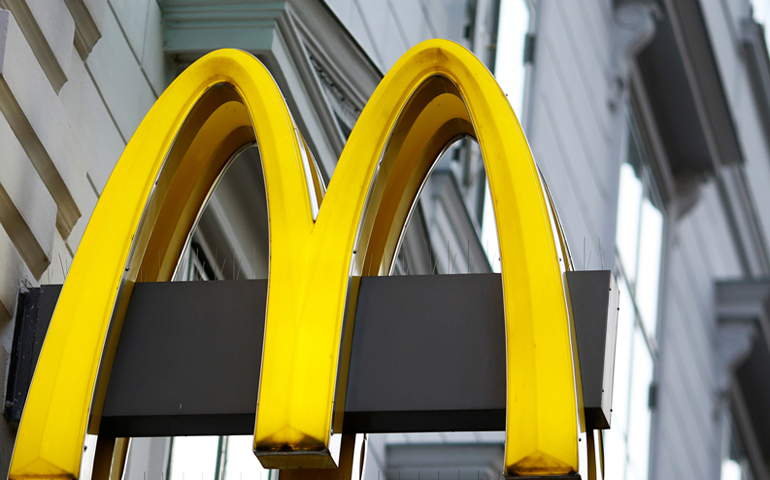 The logo of McDonald’s is seen outside a shop in Vienna in Vienna on Oct. 1, 2016. (Photo courtesy of Reuters/Leonhard Foeger)

Several senior cardinals in Rome are apparently furious about plans to open a new McDonald's restaurant in the shadow of St. Peter's Basilica and have reportedly asked Pope Francis to stop the expansion from going ahead.

But that's not the only charge of cultural heresy invading the Vatican's sacred precincts this week: Questions are also being raised after the Holy See gave approval for the Hard Rock Cafe chain to open a store on Via della Conciliazione, the main boulevard leading to St. Peter's.

The Hard Rock Cafe is set to replace a long-standing religious bookstore; the site is currently being renovated and a panel in the window confirms Hard Rock will be the new tenant.

Hamish Dodds, the CEO of Hard Rock, was quoted in the Italian daily La Repubblica as saying the store would only be selling T-shirts and musical memorabilia.

In the wake of Italy's economic crisis, such changes are becoming commonplace around the Vatican as banks and bookshops have been replaced by more bars, restaurants and stores filled with tourist souvenirs.

But the advent of a McDonald's seemed to be especially galling.

Italian Cardinal Elio Sgreccia was the first to publicly sound the alarm, saying the proposal to open an outlet of the global fast-food chain below a Vatican-owned building where several cardinals live was a "controversial, perverse decision."

In an interview published over the weekend in La Repubblica, Sgreccia said the proposal was "not at all respectful of the architectural and urban traditions" of a destination -- just a block from St. Peter's Square -- that draws thousands of pilgrims and tourists a day from around the world.

He also said serving burgers and fries in the neighborhood was unacceptable because McDonald's cuisine breached Italian taste.

"It's a commercial decision that ignores the culinary traditions of the Roman restaurant industry," said Sgreccia, 88, who is president emeritus of the Vatican's Academy for Life, which leads the church's fight against abortion and euthanasia.

One angry cardinal has even written a letter to the pope urging him to intervene against the decision despite the fact that it would reportedly bring 30,000 euros ($33,000) a month in revenue to the Vatican, La Repubblica said.

Sgreccia does not live in the building but was apparently speaking on behalf of some of the seven cardinals who live above the 5,800-square-foot site, which is being rented out by the authority that manages the Holy See's real estate. The authority goes by the acronym APSA.

The retired cardinal said the space should be used to help the needy in keeping with the pope's desire to create a "church for the poor."

Sources told the Italian news agency ANSA that the cardinals who live in the building were further angered after receiving letters from APSA advising them that they would be required to contribute to renovation work to accommodate the new tenant.

But Cardinal Domenico Calcagno, head of ASPA, denied the claim about the contributions and told La Repubblica he was "not going to back down" because the deal was legally valid.

Staff from Hill & Knowlton, the public relations firm that represents McDonald's in Italy, did not respond to several requests from RNS for comment on Tuesday (Oct. 18).

The cardinals may not be alone in their protests.

Local merchants and residents in the historic Borgo district next to the Vatican have also joined the fight against the proposed fast-food restaurant, describing it as "a serious assault" that does not enhance the artistic and cultural value of the quarter.

Representatives from Rome's City Council are also taking formal steps to block the McDonald's from going ahead, at least in the short-term, according to Italian media.

The first McDonald's opened in Rome near the Spanish Steps in the heart of the Eternal City's historic center in 1986 despite vocal protests.

There was a similar outcry in Florence earlier this year when McDonald's sought to open next to the Renaissance city's landmark cathedral, known as the Duomo.