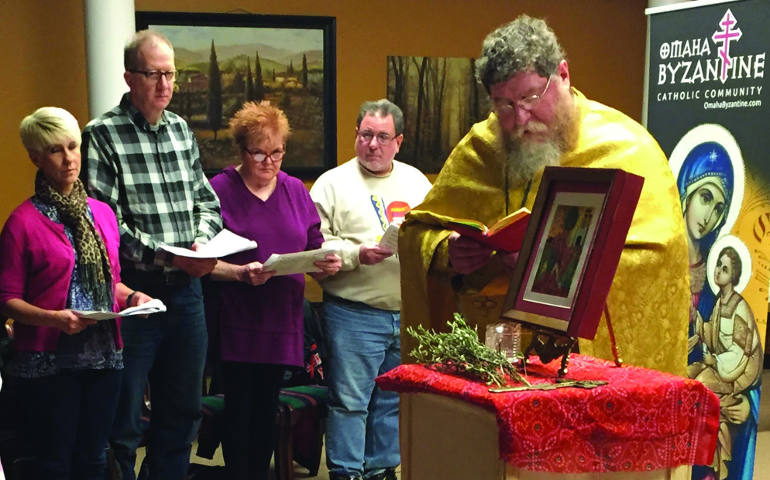 The new Eastern Catholic community is the result of a grassroots effort begun about 18 months ago by Catholic layman Matthew Willkom.

Within this short time, the Omaha community went from having monthly prayer services on a weeknight to finding a biritual priest who currently celebrates Sunday Divine Liturgy with them once monthly. About 60 people are associated with the community, though about 20 people attend regularly.

The 36-year-old radio producer moved to Omaha with his wife and three children four years ago from Minneapolis, where he first encountered the Byzantine Catholic church. Though a Latin Catholic, Willkom became a regular at the Byzantine parish there and, after living in Omaha for more than two years without a Byzantine liturgy, decided to start a Byzantine community.

"I was missing (the Byzantine liturgy) so much, I felt like something should be done," he told Horizons, the eparchy's newspaper.

For a year, the community prayed on a weeknight at a Ukrainian parish on Omaha's east side. The pastor agreed they could pray in English with Ruthenian chant. Now-retired Bishop John M. Kudrick of Parma had lent the fledgling group support in the form of liturgical books, as well as guidance from Fr. Bryan Eyman, the Parma eparchy's director of missions and outreach.

However, in January, the community found a new location -- the monastery of the Poor Clare sisters on Omaha's west side -- where biritual Benedictine Fr. Daniel Lenz currently celebrates Divine Liturgy one Sunday per month. "Biritual" means he was ordained for the Latin rite but is permitted to celebrate Byzantine liturgies as well.

Interest in starting Byzantine Catholic communities in the American Midwest is sprouting.

In addition to the Omaha community, another such outreach, under the auspices of the Byzantine Catholic Eparchy of Parma since August 2015, is operating at St. Joseph Church in West Liberty, Iowa. That community has lay-led vespers on Saturdays and monthly Divine Liturgy on Sundays, celebrated on a rotating basis by priests in the Chicago-land area. About 50 to 60 people attend, said Eyman.

"We want these communities to succeed and to thrive," he told Horizons.

Eyman explained the difference between an outreach and a mission is an outreach has no canonical status. Rather, it is a "test" community "to see if there is enough interest and commitment to establish a mission and eventually a parish," he said.

However, once an outreach is officially inaugurated, "the eparchy shows some commitment," stays in regular communication through the director and provides occasional clergy support, he said. All sacraments at outreaches of the Eparchy of Parma are registered currently at St. Athanasius the Great Parish in Indianapolis, where Eyman is pastor.

Instead, he said, a mission has canonical status and is assigned clergy; the relationship of the eparchy and the community in this case is one of obligation and responsibility.

To become a mission, the outreach must apply for nonprofit status, open a bank account, stabilize its finances and show a committed membership of about 35 households, said Eyman.

He said another community is budding in Lincoln, Neb., and yet another in western Wisconsin.

"And pending the appointment of a new bishop, there are inquiries for the establishment of outreaches in western Kansas and in New Albany, Indiana, near Louisville," he added.

The senior priest said he received several inquiries about starting outreaches since being named to this post by now-retired Bishop John Kudrick of Parma in early 2016. However, Eyman has not been able to move ahead with these inquiries since May 7, when Kudrick retired; the establishment of new outreaches must wait until a new bishop is appointed, he said.

Eyman visited the Omaha community April 24, which draws people from all over the city and from the Lincoln, Neb., area, which is about 40 miles away. After celebrating Divine Liturgy for about 60 people and inaugurating the outreach, he spoke to them about the steps in becoming a canonical mission: most important are developing commitment and stability in numbers and attendance, and getting finances in order.

Eventually, members hope to establish a mission on Omaha's west side, which is currently experiencing significant demographic growth, with young families moving into the middle- to upper-class suburb from the inner city, said Willkom.

"But we're not there yet," he said. The "next step is incorporating locally so we can start to collect donations and provide for the liturgical needs of the community."

He said there are currently no canonical Ruthenians residing in Omaha, but the recent news that a Byzantine Catholic couple from St. Nicholas Byzantine Catholic Parish in Munster, Ind., intends to join the outreach once they move to Omaha this summer is encouraging, he added.

Their presence "will provide some stability and connection with the larger liturgical and spiritual life of the eparchy," Willkom said.

The outreach also is working to establish weekly Byzantine services by the fall. Omaha's Latin-rite Catholic archbishop gave one of his deacons permission to receive the necessary formation to lead the outreach in a Typika service -- known as a Communion service in the Latin church -- on the Sundays when the priest is not available.

Willkom said the whole process has been "a journey of discovery."

"We're all very new to this," he said. "The bottom line is that we're looking for encouragement from the eparchy, and Fr. Bryan's visit certainly symbolizes that.

"We're also looking to focus on evangelization, on showing the mercy of God to each other, that same mercy we repeatedly proclaim and beg for ourselves in the Divine Liturgy," he said.

The outreach is open to serving all Byzantines, he said. To date, they have reached out to Melkite Catholic refugees from war-torn Syria and Iraq, who continue to make their way to the Omaha-Lincoln area.