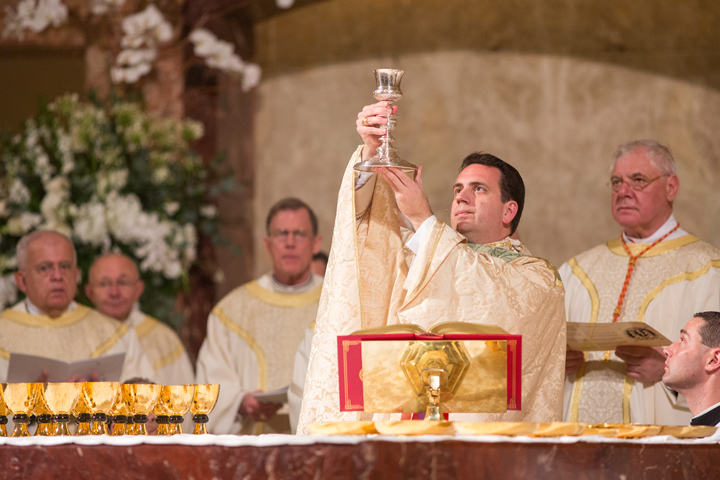 Bishop Steven J. Lopes raises the chalice during his Feb. 2 episcopal ordination Mass at the Co-Cathedral of the Sacred Heart in Galveston-Houston. (CNS/Tom McCarthy Jr.)

Envoys of the Vatican along with dozens of U.S. Catholic prelates gathered Feb. 2 with the faithful at the Co-Cathedral of the Sacred Heart in Houston for a history-making Mass -- ordination and installation Mass for Bishop Steven J. Lopes.

He is the first bishop of the Personal Ordinariate of the Chair of St. Peter, established by the Vatican in 2012 to serve former Anglicans living full communion with the Catholic Church.

Lopes assumed his new post, declaring "Magna Opera Domini -- Great are the works of the Lord."

"We thank God for Pope Emeritus Benedict XVI and his spirit-prompted vision of unity and faith in a diversity of expression which informs the apostolic constitution 'Anglicanorum coetibus,'" Bishop Lopes said. "We thank God for our Holy Father Pope Francis for putting his vision into concrete expression."

With "Anglicanorum coetibus," Pope Benedict established the ordinariate Jan. 1, 2012, in response to requests by Anglicans in the U.S. and Canada seeking to become Catholics.

For the past 10 years, Lopes, 40, worked at the Vatican Congregation of the Doctrine of the Faith, where he helped guide the process for American and Canadian Anglican congregations wishing to join the Catholic Church.

The homilist was Cardinal William J. Levada, the retired head of the congregation. He also is former archbishop of San Francisco and ordained the new bishop as a priest in 2001.

"Today is Candlemas day, the feast of the Presentation of the Lord," Levada said. "Today is the blessed day when Jesus was presented in the temple by Mary and Joseph. Outwardly he was fulfilling the law, but in reality he was coming to meet his believing people. Among the believing people he met in the Jerusalem temple, the names of Simeon and Anna have sounded down the ages. But the liturgy is not simply about a past event.

"On Candlemas Day in this year of grace 2016, Jesus has come again to meet his believing people in word and sacrament," he continued. "The people of faith Jesus has come to meet today is us, you and me -- the church. And the name that will go forward from this day in this encounter with Christ is that of Steven Joseph Lopes."

Lopes' appointment marked the continuation and a fuller maturity of Pope Benedict 2009 apostolic constitution that created a pathway for Anglican parishes to join the Catholic Church through ordinariates, akin to dioceses but national in scope.

Parishes of the ordinariate will be fully Catholic while retaining elements of their Anglican heritage and traditions, including liturgical traditions.

In announcing the appointment of Lopes, a Vatican news release said Francis' decision to name him "affirms and amplifies Pope Benedict's vision for Christian unity, in which diverse expressions of one faith are joined together in the church.

Lopes expressed warm approval for the faithful of the ordinariate, the descendants of "the noble patrimony of English Christianity" who "prompted us to seek the fullness of Catholic communion under the successor of St. Peter the apostle."

"Men and women of faith, from St. Augustine of Canterbury down to our own day, who have helped us respond to the voice of the Lord Jesus," Lopes said. "Who have enriched the church with the noble patrimony of English Christianity and who have formed in us a passion for truth and who have blessed us with that same passion."

The new bishop also shared his inspiration for the maxim "Magna Opera Domini," recalling a retreat of Ordinariate priests and seminarians in Florida.

Many there shared their stories of journey to Catholic reunification and their search for the truth in sacred scripture, along the way sacrificing and confronting suffering. They left behind what was familiar and comfortable for what at times has been a lonely path.

At that moment it was clear, Lopes said, that this was the work of the Lord, "and great are the works of the Lord."

The Houston-based Chair of St. Peter has its headquarters at Our Lady of Walsingham Church. Its jurisdiction covers the U.S. and Canada and it is one of three ordinariates worldwide.

According to data provided by officials, the ordinariate includes 62 priests and more than 20,000 Catholics in 43 parishes, including St. John Vianney in Cleburne, St. Mary the Virgin in Arlington and St. Timothy in Fort Worth.

The other two personal ordinariates are Our Lady of Walsingham in the United Kingdom and Our Lady of the Southern Cross in Australia.

Msgrs. Keith Newton and Harry Entwistle, who head the Walsingham and Southern Cross ordinariates, respectively, were also in attendance.

Lopes' predecessor, Steenson, was ordained an Episcopal priest in 1980. The former bishop of the Episcopal Diocese of the Rio Grande in Texas, he became a Catholic in 2007 and was ordained a Catholic priest in 2009. But because he is married, he could not be ordained a bishop and could not ordain priests. As head of the ordinariate, he was a full voting member of the U.S. Conference of Catholic Bishops.

In an interview with Catholic News Service when Bishop Lopes was appointed, Steenson said, "I welcome this news with all my heart, for the ordinariate has now progressed to the point where a bishop is much needed for our life and mission. A bishop will help to give the ordinariate the stability and permanence necessary to fulfil its mission to be a work of Catholic unity."

"That the Ordinariate would ultimately be headed by a bishop has been the intention of Anglicanorum coetibus. It is indeed an encouraging sign that we have reached that goal."

Lopes' installation coincides with the release of "Divine Worship: The Missal," the definitive book of liturgical texts for Mass in the personal ordinariates.

The new bishop closed his remarks with a message from Pope Francis, whom Lopes met with after his appointment. He described the pope as "very well informed" about the ordinariate, knowing "where we had come and what we had sacrificed to get here. He was excited for the church and for us."

"'Avanti!'" Lopes recalled the pope saying in Italian. "Go forward! There is our mandate. Go forward and preach the Gospel. Show the world that the Christian disciple is indeed joyful and that the communion of the church is worth committing our lives to."