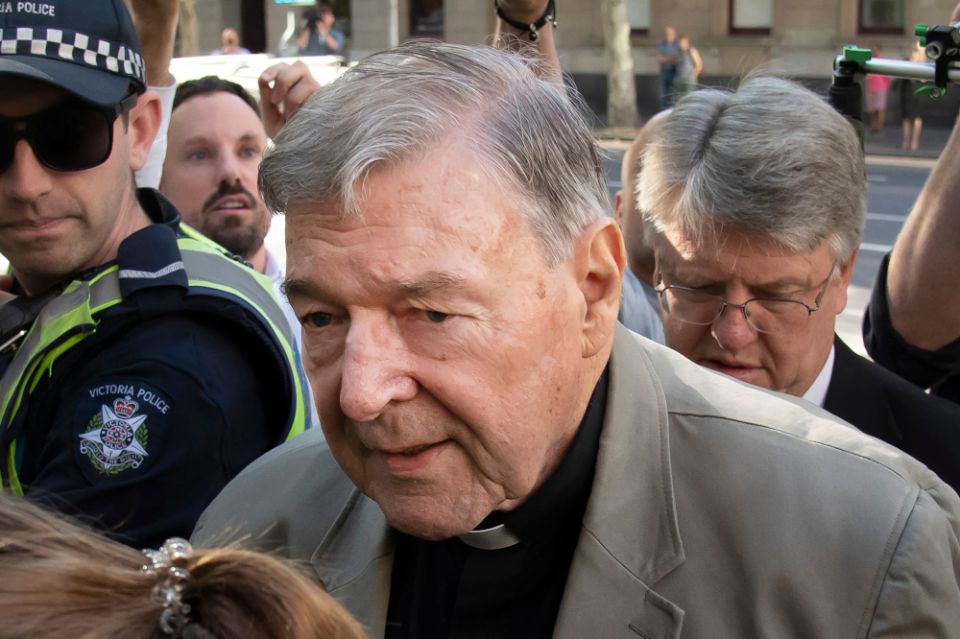 In this Feb. 27, 2019, file photo, Cardinal George Pell arrives at the County Court in Melbourne, Australia. A judge on Friday, June 4, 2021, ordered a dozen Australian media companies to pay fines from 1,000 Australian dollars ($766) to AU$450,000 ($345,000) for breaching a gag order by publishing references to Cardinal Pell's since-overturned convictions in 2018 for child sexual abuse. (AP File/Andy Brownbill)

CANBERRA, Australia — A judge on June 4 ordered a dozen Australian media companies to pay fines from 1,000 Australian dollars ($766) to AU$450,000 ($345,000) for breaching a gag order by publishing references to Cardinal George Pell's since-overturned convictions in 2018 for child sexual abuse.

Dozens of companies, reporters and editors were initially charged with contempt and breaching a suppression order over their coverage of the convictions, which were banned from publication in Australia until February 2019.

Such suppression orders are common in the Australian and British judicial systems. But the enormous international interest in an Australian criminal trial with global ramifications highlighted the difficulty in enforcing such orders in the digital age.

The media companies pleaded guilty in February to 21 charges of contempt in a plea deal in the Victoria state Supreme Court.

Justice John Dixon said on June 4 the guilty pleas did not demonstrate remorse but were entered to protect individual editors, reporters and broadcast presenters from convictions. The individuals had faced potential prison sentences.

The Age Company and News Life Media's offenses "constituted a blatant and willful defiance of the court's authority," Dixon said.

"Each took a deliberate risk by intentionally advancing a collateral attack on the role of suppression orders in Victoria's criminal justice system," Dixon said.

No foreign news organization has been charged with breaching the suppression order. The U.S. Constitution's First Amendment would prevent such censorship in the United States, so attempting to extradite an American for breaching an Australian suppression order would be futile.

Pell was Pope Francis' top financial adviser and regarded as the third most senior cleric in the Vatican when he became the most senior Catholic ever convicted of child sex abuse.

Pell's five convictions have since been overturned and he has returned to the Vatican after spending 13 months in prison.

No Australian media company published a straight news report of Pell's convictions, but some directed their audiences to international online reports.

"The world is reading a very important story that is relevant to Victorians," the newspaper said, referring to residents of Victoria state.

The newspaper said it was prevented from "publishing details of this significant news."