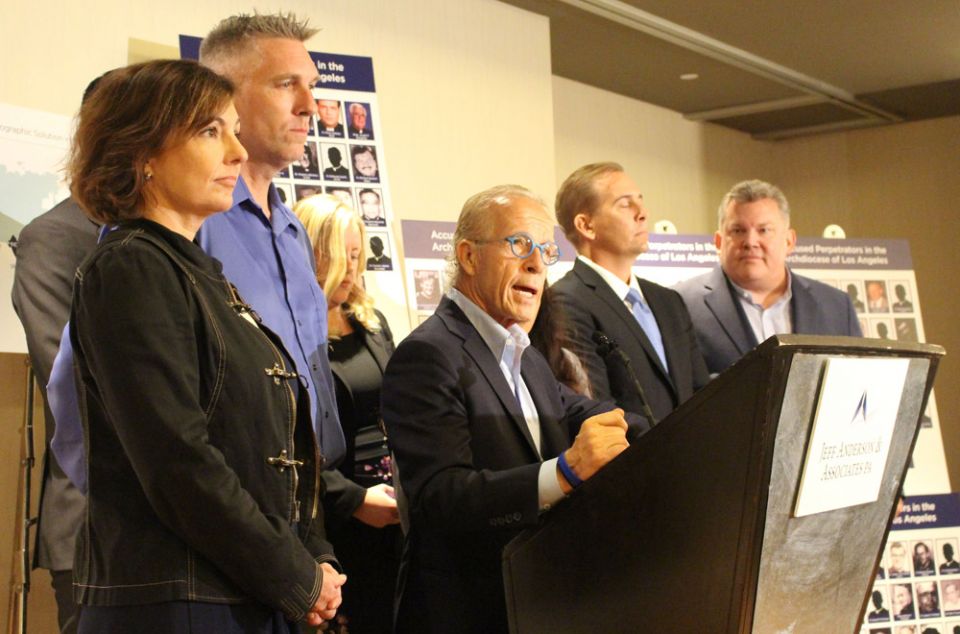 Los Angeles — A lawsuit against the California bishops and 11 dioceses in California, including the archdioceses of Los Angeles and San Francisco, for covering up child sexual abuse was filed Oct. 2 by survivor Tom Emens and Jeff Anderson & Associates.

Emens isn't filing the lawsuit for money. He's requesting the release of the names and documented histories on all clerical offenders in each diocese.

"I just want the truth. The truth is far more valuable," Emens said. "I'm just one person. There are thousands of other victims out there."

Jeff Anderson & Associates, a Minnesota-based law firm with a long history of suing the Catholic Church, also released a 120-page report on clerical sexual abuse in the Archdiocese of Los Angeles, containing information on more than 300 clerical offenders and allegations that the archdiocese allowed more than 35 perpetrators to flee the jurisdiction after reports of abuse arose.

"There is a danger that he and we feel compelled to expose," Jeff Anderson said. "And that begins today with this lawsuit that is now filed in Los Angeles."

The report's over 300 names, Emens said, is not complete. The list contains names collected from lawsuit records and other public records. But his alleged abuser, Msgr. Thomas Joseph Mohan, isn't on that list.

"I don't know how many more victims are out there," he said. "Moving forward we have to protect the kids."

Emens said that through mutual friends on Facebook he found another person who said Mohan had abused them. The other person wasn't and still isn't in a place to come forward, Emens said, which is why it was so important for him to do so.

Emens said he felt validated to put his story out there and be heard. "In spite of what happened, I have a wonderful family, I have a great job," he said. "I think there's a reason for that, so I can stand and say, 'I'm here. I'm empowered. I'm going to do the right thing.' And that's what I'm going to do."

Mohan died in 2002. The statute of limitations prevents Emens from filing against Mohan.

California Gov. Jerry Brown vetoed a measure Sept. 30 that would have extended the state's statute of limitations allowing victims to file abuse claims until they are 40 years old and would have allowed those with repressed memories of the abuse to sue within five years of realizing the cause of their trauma.

The governor's veto "was a gut punch," Emens said.

The lawsuit was filed against the archdioceses of Los Angeles and San Francisco and the dioceses of Orange, San Bernardino, San Diego, Fresno, Sacramento, Oakland, San Jose, Monterey and Santa Rosa, according to press release from Anderson & Associates. The Archdiocese of Chicago, where a perpetrator worked before being sent to California, is also named in the suit.

The Archdiocese of Los Angeles said in a statement that it has not yet been served with a lawsuit.

"The Archdiocese has acknowledged and taken responsibility for the failures and mistakes in the way abuse cases were handled in the past and instituted a strict 'zero tolerance' policy," the statement reads.

"Anyone found to have committed abuse — whether a priest, deacon, religious or lay person — would be held accountable and permanently removed from ministry in the Archdiocese."

The archdiocese acknowledged the report's findings came from its publically released documents but did not say if it will be releasing any of the additional documents or names that Jeff Anderson & Associates are requesting.

Using the names and information already released to the public, the report shows a pattern and practice that Anderson said has been used in the past and is currently being used to hide abuse. Anderson said it's a "playbook" and mirrors the findings of the Pennsylvania grand jury report that was released in August detailing the abuse of minors and a cover-up of that abuse in eight dioceses in that state.

The Anderson & Associates released Oct. 2, provides information on more than 35 accused priest-abusers who have offended from the Archdiocese of Los Angeles but were moved secretly out of the archdiocese to other countries, Anderson said.

The report quotes a 1986 letter from Cardinal Roger Mahony, who was then archbishop of Los Angeles, that reads, "I feel strongly that it would not be possible for Monsignor [Peter] Garcia to return to California."

The letter continues, "I believe that if Monsignor Garcia were to reappear here within the Archdiocese we might very well have some type of legal action filed in both the criminal and civil sectors."

The letter recommends that Garcia stay in the Archdiocese of Santa Fe, New Mexico.

Patrick Wall, advocate for Jeff Anderson & Associates, said they have about a dozen people going through documents, creating reports like this by hand. What takes them months to do, he said, the archdiocese could do within two weeks because of how sophisticated the Archdiocese of Los Angeles' secret archives are.

"This is not rocket science," he said. "And they may be able to even double this number."

Wall said that as more of these reports and names are released, people will be able to connect the dots and see patterns showing why more offending priests show up in certain churches.

[Heather Adams is a freelance writer based in Los Angeles.]