The accuser prefers the traditional Tridentine rite Latin Mass. That way she only sees the celebrant from the back and can pray in peace, she told NCR.

"That's real separation; it doesn't feel like the priest interacts with you," she said.

A few thousand miles away in Sacramento, California, Jeremy Leatherby, the former pastor of Presentation of the Blessed Virgin Mary Parish, excommunicated priest, and the man she accuses of sexual exploitation, is said to be living quietly with his family. 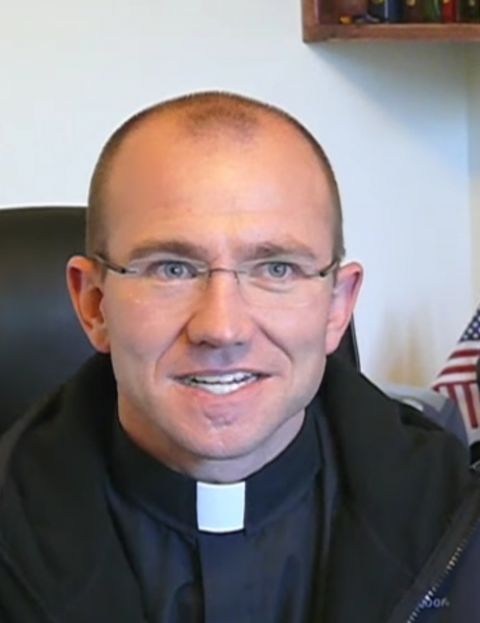 The excommunication was invoked only after Leatherby refused to acknowledge Pope Francis and Bishop Jaime Soto of Sacramento during the Eucharistic Prayer. While suspended, awaiting a church court's verdict on the alleged sexual violations, Leatherby celebrated Mass in private homes in violation of his bishop's order. During those liturgies, he proclaimed Pope Benedict XVI as the only living legitimate successor of Peter.

Soto responded in an announcement made public Aug. 7.

"Fr. Jeremy Leatherby has placed himself and others in a state of schism with the Roman Catholic Church. By his words and actions, Fr. Leatherby has incurred a latae sententiae (automatic) excommunication. This means that by his own volition he has separated himself from communion with the Roman Pontiff, Pope Francis, and other members of the Catholic Church," wrote Soto.

That, according to canon law, took care of the theological dispute.

But on the issue of alleged sexual exploitation, the accuser awaits church justice. Leatherby, in a letter addressed to his former priest colleagues and posted Aug. 8 on the St. Joseph’s Battalion Sacramento blog, said he awaits exoneration.

In his Aug. 7 letter, Soto said the process "admittedly has been long." For all involved, justice in this case has gone slowly.

The charges were brought forth by the accuser to church authorities in early 2016. The accuser told NCR that Leatherby used the priesthood to manipulate and control, all under the guise of spiritual direction and counseling.

The accuser told NCR that she was forced to leave Sacramento, and wished to remain anonymous because of the nature of the charges she lodged. "He destroyed my reputation there," she told NCR. She said she was not the only woman involved with Leatherby.

"She is the tip of the iceberg," Becky Jennings, also a former member of the parish, who now lives in Virginia, told NCR. A number of women in the parish, she said, were being groomed by the pastor.

"The Leatherbys have scared others into silence," she said, noting that the excommunicated priest's family has mounted a campaign to discredit his accuser and her supporters. That family includes Leatherby's father, David Leatherby Jr., who serves as a deacon in his son's former parish.

She said that the Leatherbys have pressured other women not to come forward with complaints against Jeremy Leatherby.

The excommunication is the culmination of a series of events that have divided what was a tightly knit parish. Presentation of the Blessed Virgin Mary drew parishioners from all over the region, attracted by a mix of Leatherby's anecdotal preaching, support for Medjugorje visions, and a traditionalist Catholic school curriculum that he helped to draw up, invoking what he described as classical education precepts. He brought in a traditional religious community, the Dominican Sisters of Mary, Mother of the Eucharist, to run the school. The accuser was a teacher there.

Because of the ongoing canonical issues, the Leatherbys, through their attorney, declined to speak with NCR.

In the Sacramento area, the Leatherbys are known as a prominent Catholic family. According to The Sacramento Bee, the family fortune largely relies on real estate, but they are more popularly known for a chain of premium ice cream shops and their support of Catholic causes. Jennings described them to NCR as a Kennedyesque presence, albeit with a conservative reputation.

Family provides both a personal and church support system for Jeremy Leatherby.

Deacon Dave Leatherby has been a defender of his son, according to the accusers and her supporters, often at their expense. In his Aug. 8 letter, Jeremy Leatherby wrote that he is guilty only of sending misinterpreted signals and of what he described as boundary violations.

The accuser, in an article in the Catholic Herald, said that Leatherby set himself up as a conduit to God, offering to provide a way for the both of them to get to heaven. She told the Herald he instigated ritualized intimate contact, invoking saints like Francis of Assisi and Clare, citing them as an example of an intense spiritual relationship between a man and a woman. She said that he cut off her hair as a sign of a vow of obedience to him as a priest, according to the Herald article.

"I felt if I disobeyed him, I was disobeying God," she told NCR.

In his Aug. 8 letter to his fellow priests, Leatherby said, "I was placed on leave on account of allegations from an adult woman. I hereby attest that I have admitted from the beginning that I violated boundaries in ways with that woman, which is why up until the present day I have cooperated with the juridical process for the accusations to be adjudicated."

However, he emphasized, "I also categorically deny and want to refute a number of the allegations brought against me. Some are of such a nature that I cannot bring myself to believe that she even claimed them."

In the midst of the long adjudication process, coronavirus offered more complications. 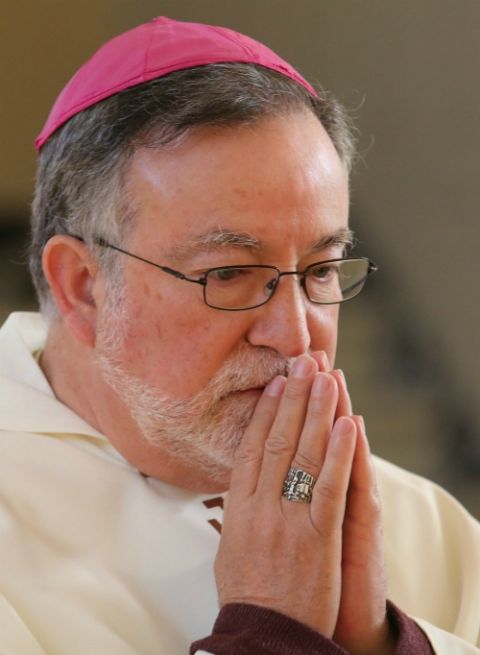 Leatherby, while under suspension by his bishop while the sexual exploitation issues were being adjudicated, celebrated Mass in private homes, despite Soto's orders that Masses in the diocese be halted due to the coronavirus and California emergency measures against large gatherings. Leatherby said in his Aug. 8 letter that he was acting in an emergency capacity to offer the sacraments to spiritually impoverished Catholics.

The Leatherbys publicly pushed back against Soto. Deacon Leatherby claimed his son was paying the price for his deacon father blowing the whistle on two priests in his previous parish whom, he said, a housekeeper found in bed with each other. The diocese through a spokesman declined to address the alleged incident with NCR.

Supporters of the accuser told NCR that the case raised by Deacon Leatherby is a distraction and that the former Fr. Leatherby used his popularity as a tool of ingratiating himself with women.

Jennings told NCR that Jeremy Leatherby was a charismatic figure. He would sometimes cry during his homilies, evoking emotion about family and personal stories. Leatherby was different from other Catholic priest homilists, Jennings told NCR. "It was a tool of manipulation," she said about his sermons.

The opposition to Francis is a new wrinkle from Leatherby, who attended the North American College in Rome, known as a training center for future American bishops. He wasn't overtly political or controversial before the pandemic, Jennings told NCR. Rather, he was smooth and popular.

"He was not a fire and brimstone priest. He was a happy and good feeling kind of priest, in a conservative way. He was not preaching in a political way. He wanted everyone to feel good," said Jennings, who now lives in Virginia.

Bridget Patton, a parishioner and supporter of the accuser, noted that the former Fr. Leatherby would know the names of all the schoolchildren. His sermons were sometimes based on the Scripture readings or the church calendar, "but he would tell stories everyone loved." She remembered him rocking back and forth on his heels as he preached, providing an aura of excitement.

Soon after he arrived, Masses featured crowded pews in what had previously been a parish on the decline. The school proved a popular attraction offering a traditionalist curriculum and much overt Catholic piety.

"It was a parish on its way out. All of a sudden, it had lots of young families," said Patton.

Jeremy Leatherby, through his Aug. 8 letter, said that justice has moved too slowly. He awaits exoneration. Still, he argued that Francis is guilty of syncretism and worshiping idols, joining the complaints of some traditionalist Catholics that grew out of last year's synod for the Amazon.

"The last four and a half years of my life have been unbelievably painful. I have lived largely in isolation and tremendous loneliness. I have been stripped of virtually everything. It has been like living in a prison without bars, yet the captivity is real. I have been in bondage until my case is heard and wrapped up, and I can be freed to go on living," Leatherby wrote.

His accuser and her supporters see it far differently. They told NCR that the delay in the case gave Jeremy Leatherby more opportunities to exploit women.

They expect him to be back again in some capacity, whether inside or outside formal diocesan structures.

"He's not going quietly. The family is holding him up. How are they going to let this go?" said a supporter of the accuser.

Three of Leatherby's siblings, and their families, remain parishioners. While the former Fr. Leatherby is gone, Presentation of the Blessed Virgin Mary Parish remains strongly influenced by the family, said Patton.

The accusers' supporters told NCR that the case illustrates the importance of the church moving quickly on what they described as exploitation of women.

They also said it indicates how traditionalist Catholics are vulnerable to clergy they have grown to trust.

"He was the last priest I thought would do something like that," said Jennings, who noted that Leatherby's insistence upon strict adherence to church teaching, particularly around matters of sexuality, made him seem an unlikely candidate.

"I want women to have their eyes open," the accuser told NCR.

Jennings said the experience at the Sacramento parish has transformed the way she lives her Catholic faith.

"Basically, I got very much caught up in a bunker mentality," she wrote NCR in an email. "We were an insular, protective Catholic bubble. I had spent 20 plus years chasing after a community like that after I entered the Church. After finding out what the community was really like, how it had very sinister currents under all the pious show, my identity as a Catholic conservative has been shattered."

The accuser, residing with her husband and children in a different region of the country, said that after more than four years, there still has not been any church justice exerted in her case, despite the former priest's excommunication on the issue of loyalty to Francis and Soto.

Leatherby is now seeking a formal dispensation from his clerical state, despite his excommunication. He declared himself as "No longer being in union with the church over which Bergoglio [Pope Francis] reigns."

But he hinted at a return in some kind of ministerial capacity, whether inside or outside the Catholic Church.

"Of course, I remain a priest forever according to the order of Melchizedek, and I intend to seek to live out my priestly promises independently," he wrote.

As for the accuser, she remains far from Sacramento, a Tridentine Mass adherent, scarred by her experience with her former pastor. "There's less opportunity for the priest to be part of a dramatic performance. There's no room for personalities," she told NCR.