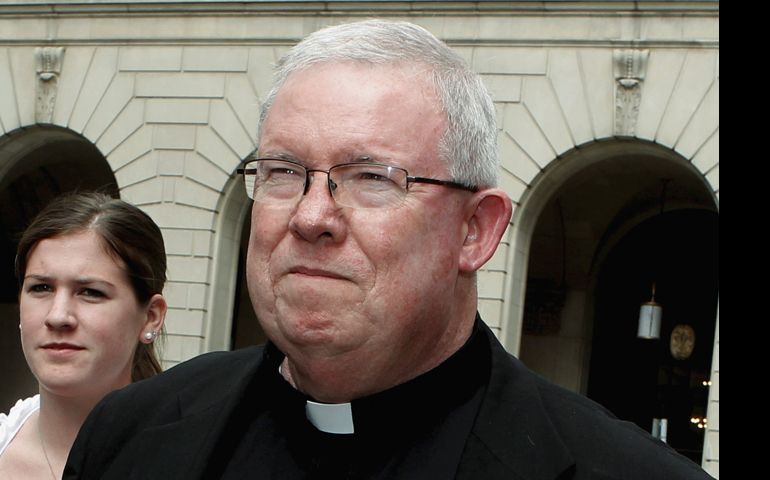 Philadelphia — A Pennsylvania appeals court has vacated the conviction of Msgr. William J. Lynn, and ordered a new trial for the Philadelphia archdiocese’s former secretary for clergy.

Lynn, convicted in 2012 on a single count of endangering the welfare of a child, had been serving a three-to-six year prison sentence. He was the first Catholic administrator in the country to be sent to jail for failing to adequately supervise a sexually abusive priest.

In a 43-page decision, a panel of three state Superior Court judges ruled that the trial court -- Philadelphia Common Pleas Court Judge M. Teresa Sarmina -- "abused its discretion" by allowing 21 supplemental cases of sex abuse to be admitted as evidence against Lynn.

The 21 cases dated back to 1948, three years before Lynn was born, and took up at least 25 days of the 32-day trial. In his appeal, Lynn's lawyer, Thomas Bergstrom, argued that the prosecution "introduced these files to put on trial the entire Archdiocese of Philadelphia, hoping to convict [Lynn] by proxy for the sins of the entire church."

The Superior Court judges agreed, ruling that the "probative value" of the supplemental cases "did not outweigh its potential for unfair prejudice, and that this potential prejudice was not overcome by the trial court's cautionary instructions."

In their decision, the Superior Court judges blasted Sarmina.

"None of the evidence concerned the actual victim in this case, and none of it directly concerned [Lynn's] prior dealings with either [former priest Edward V.] Avery or [Father James J.] Brennan," the two co-defendants on trial with Lynn, the Superior Court judges wrote. "In this regard, the trial court has apparently mistaken quantity for quality in construing the probative value of this evidence en masse." The Superior Court judges found that the "probative value of significant quantities of this evidence was trivial or minimal."

On June 22, 2012, a jury in Philadelphia Common Pleas Court found Lynn guilty of a single charge of endangering the welfare of a child. Lynn had served 18 months of his sentence on Dec. 26, 2013 when a panel of three state Superior Court judges -- John Bender, Christine Donohue and John Musmanno -- reversed the monsignor's conviction and ordered him "released forthwith."

But Sarmina didn't agree, and instead imposed conditions on the defendant that amounted to house arrest.

Lynn had spent 16 months under house arrest until April 27, when the state Supreme Court reversed the reversal by the Superior Court. Three days later, Sarmina granted a motion by the district attorney's office to revoke bail and send Lynn back to jail to serve out the remainder of his sentence.

The legal battle over the monsignor's case dwelled on the wording of the state's original child endangerment law. The law, which took effect in 1972, says, "A parent, guardian or other person supervising the welfare of a child under 18 years of age commits an offense if he knowingly endangers the welfare of the child by violating a duty of care, protection or support."

Since his return to jail, Lynn has served another eight months of his sentence, meaning he has been in prison a total of 24 months, as well as 16 months under house arrest.

In today's decision, the same panel of Superior Court judges -- Bender, Donohoe and Musmanno -- again reversed Lynn's conviction, this time because of the supplemental evidence.

The district attorney of Philadelphia is widely expected to appeal the Superior Court's decision to the state Supreme Court. If that happens, the Supreme Court would have another chance to review the Lynn case.

“I think it’s the right decision, I’m pleased with it,” Bergstrom said. The monsignor’s lawyer said that supplemental evidence is allowed into a case to show “other acts of the defendant.”

But the supplemental cases allowed in the Lynn case concerned “other acts of others,” Bergstrom said. The effect on the jury was “completely awful and devastating.”

“We’ll see what happens next,” Bergstrom said. As of today, Bergstrom had been unable to reach his client. The lawyer said he had no idea when Lynn, currently the prison librarian at the State Correctional Institute in Waymart, Pa., would be released.

Former altar boy at center of Kansas City lawsuit: 'My case turned into a cause'