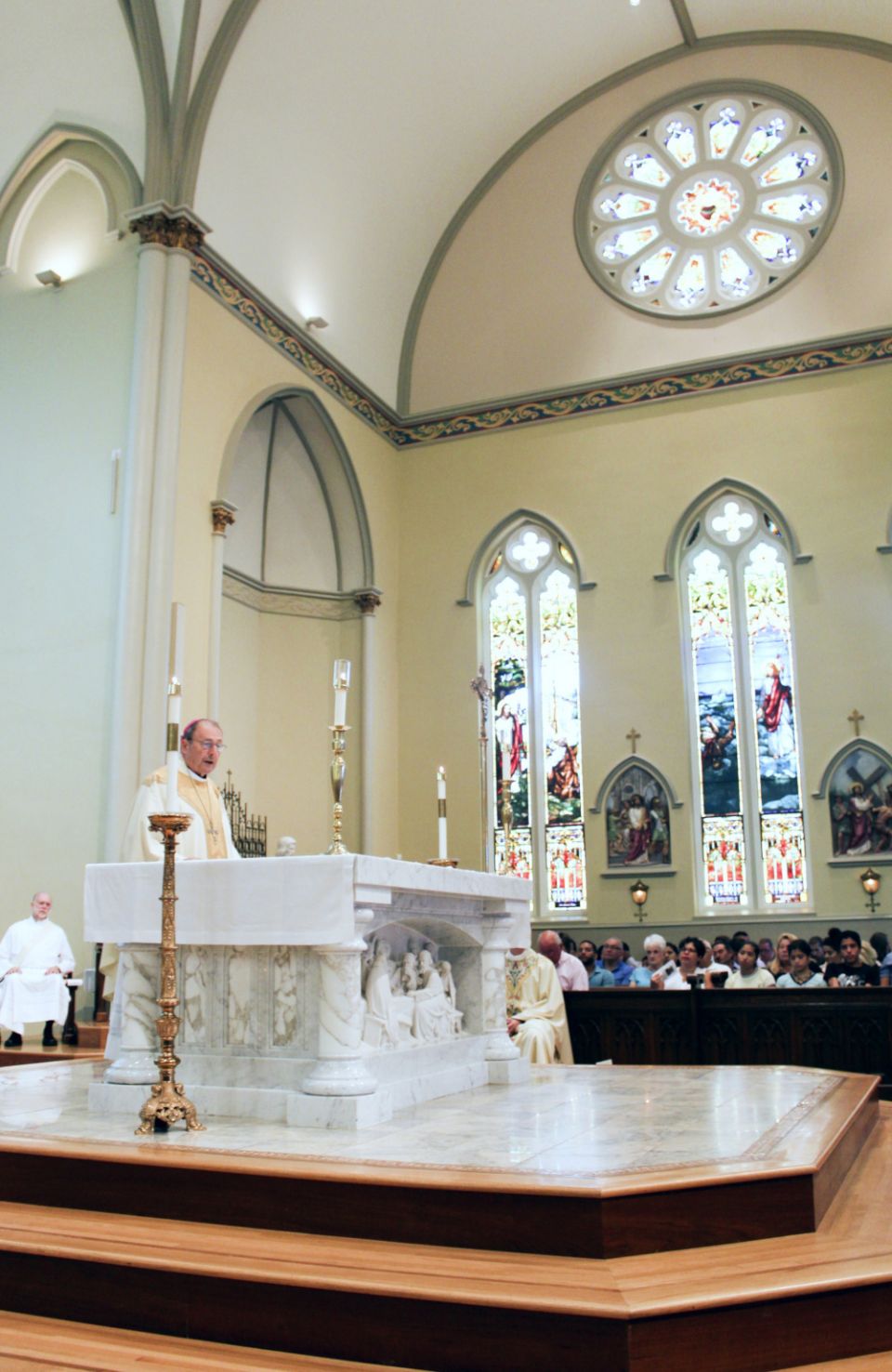 Bishop Robert Guglielmone of Charleston, S.C., speaks to a congregation June 24, 2018, at the Basilica of St. Peter in Columbia, S.C., marking the 10th anniversary of his installation as bishop of the Diocese of Charleston. A lawsuit was filed in Nassau County, N.Y., Aug. 14, 2019, claiming Bishop Guglielmone sexually abused a minor boy in 1978 or 1979 when the bishop was a priest at St. Martin of Tours Catholic Church in Amityville. Attorneys for Bishop Guglielmone issued a statement Aug. 14 saying the allegations are "provably false." (CNS/The Catholic Miscellany/Christina Lee Knauss)

Charleston, S.C. — Attorneys for Bishop Robert Guglielmone of Charleston released a statement Aug. 14 saying that the allegations of sexual abuse of a minor levied against him are "provably false."

"These allegations are false, provably false," wrote attorneys Bruce Barket and Aida Leisenring. "As the plaintiff admitted to a family member, he made this up in order to get money from the church ('it's worth a try,' the plaintiff said)."

The statement continued: "Bishop Guglielmone is a good man who has devoted his entire career to the church, education and community service. Although he was under no obligation to do so, he submitted himself to a polygraph examination, which he passed."

The attorneys stated their intentions in no uncertain terms.

"We will not allow these false allegations to tarnish the outstanding and selfless work he has done throughout his life. We will see the plaintiff in court and the bishop will be cleared," they stated.

The lawsuit was filed the same day that New York state extended its statute of limitations for child sexual abuse claims. The Child Victims Act allows victims to file civil suits and criminal charges against abusers or institutions until they reach age 55.

According to an Aug. 14 news release from the Diocese of Charleston, the plaintiff's abuse allegation was not determined to be credible when it was made and information regarding the accusation was provided to law enforcement. The Vatican has been informed of the allegation and Guglielmone has been cooperating fully with a thorough ongoing investigation initiated at the request of the Vatican."

The Diocese of Rockville Centre's statement said that it had "first reported this allegation to law enforcement authorities in 2006."

"The allegations were repeated in June of 2018," the statement continued. "Again, law enforcement was notified," the statement continued. "Because the allegations involve a former priest of the Rockville Centre Diocese who is now the bishop of a different diocese, the Holy See (the Vatican) was notified by Bishop (John) Barres. In August of 2018, the Holy See instructed Bishop Barres to conduct a canonical investigation of the matter. That investigation is ongoing."

Guglielmone has adamantly denied the allegation of abuse.

"I understand that this individual filed a lawsuit against me today. The allegations are false. I engaged in no wrongdoing. I look forward to being vindicated in court," he said.

The diocese's vicars general, Msgrs. Richard D. Harris and D. Anthony Droze, declared their support of the bishop, stating that he has been a trusted leader for more than 10 years and that they have the utmost faith in his truthfulness and in his innocence.

In December and January, Guglielmone traveled around South Carolina participating in a series of seven town hall meetings to listen to Catholics tell of their concern, sadness and anger about sexual abuse in the church.

As he faced the strong emotions of individuals who spoke up, the bishop listened and shared his own concern and sadness, and then prayed with the crowds.

In a December 2018 interview with The Catholic Miscellany, Charleston's diocesan newspaper, Guglielmone said all of those perspectives were important for him to hear, and he asked people to hold Church leaders accountable and realize that clergy are human like everyone else.

He said the crisis calls for a renewed commitment to prayer and a serious effort to reach out to all victims of sexual abuse, whether they were abused by clergy, family members or others in the community.

"We must find ways to reach out to those who have been abused and help them to move from being abuse victims to survivors," Guglielmone said. "The victims who have come forward have done the church a great service, and now we need purification of society as a whole from this evil."

In response to the lawsuit, the bishop reiterated his concern for all victims of child sexual abuse.

"I offer my prayers daily for those whose lives have been hurt or devastated by the actions of a member of the clergy or by any other persons, especially all abused children and other vulnerable persons," Guglielmone stated in the news release. "It is particularly tragic when the abuse is at the hands of a priest in whom their spiritual care and well-being has been entrusted."

The jazz writer: Jason Berry's quest to understand the place where he's from

New Vatican law criminalizes abuse of adults, even by laity