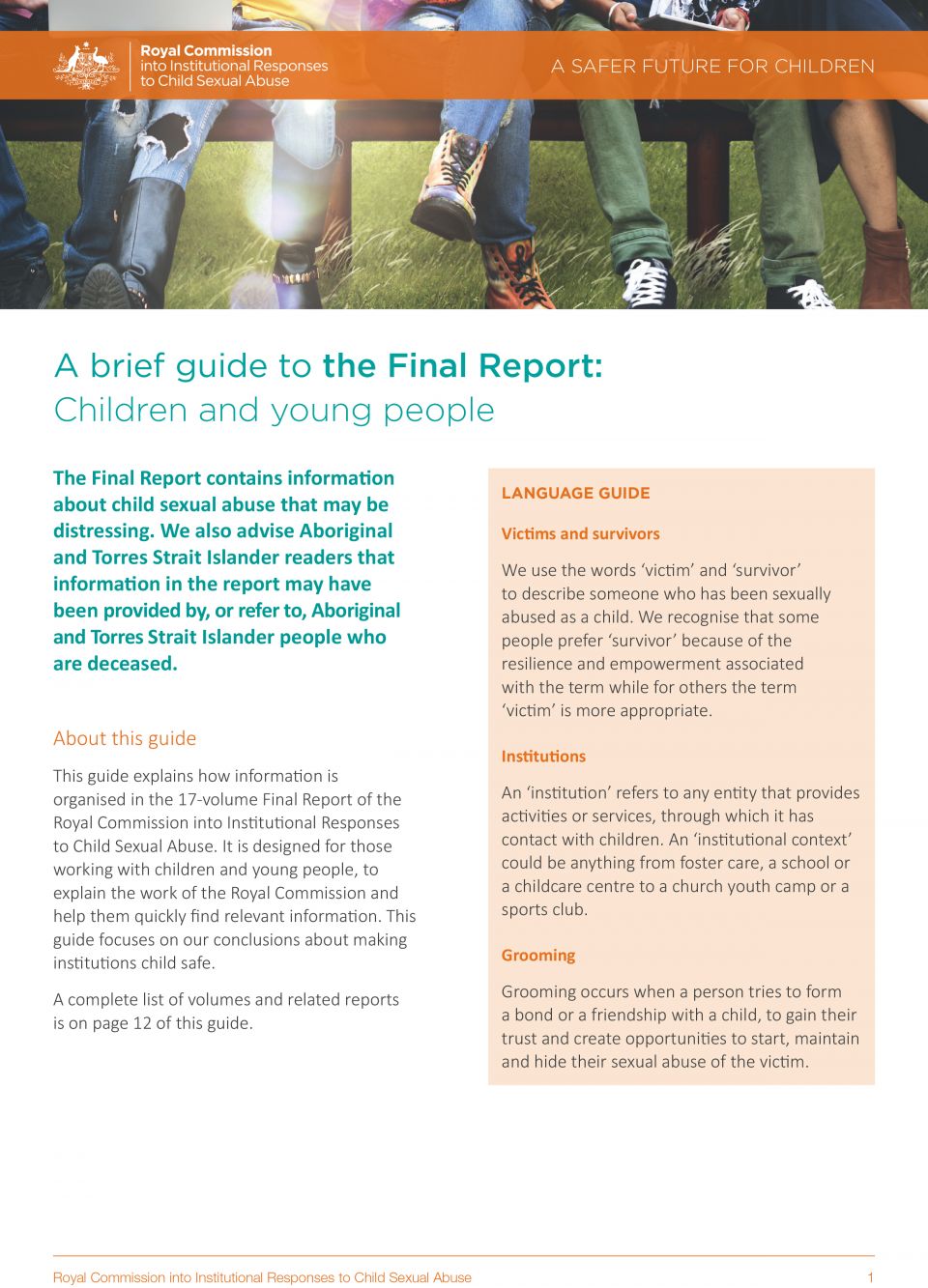 This is the cover of "A brief guide to the Final Report: Children and Young People." Australia's Royal Commission Into Institutional Responses to Child Sexual Abuse released its 17-volume final report Dec. 15. (CNS/Royal Commission)

Sydney — Australia's Catholic bishops and religious orders, responding to recommendations from the Royal Commission Into Institutional Responses to Child Sexual Abuse, accepted 98 percent of its suggestions, but said they could not accept recommendations that would violate the seal of confession.

"We are committed to the safeguarding of children and vulnerable people while maintaining the seal. We do not see safeguarding and the seal as mutually exclusive," said the preamble to a 57-response to dozens of recommendations concerning child safety, formation of priest and religious workers, ongoing training in child safety and even out-of-home care service providers.

The response, published Aug. 31, came eight-and-a-half months after the Royal Commission released its 17-volume report on child sexual abuse. The report was based on five years of hearings, nearly 26,000 emails, and more than 42,000 phone calls from concerned Australians. In February 2017, Australian church leaders spent three weeks testifying before the commission.

In a statement published with their response, Josephite Sister Monica Cavanagh, president of Catholic Religious Australia, and Archbishop Mark Coleridge of Brisbane, president of the Australia Catholic Bishops' Conference, expressed "their deep sorrow that vulnerable children were abused, weren't believed and weren't supported when seeking justice."

Cavanagh said, "The process is already underway to reform the church's practices to ensure that safeguarding is integral in all that we do as part of our ministry and outreach in the community."

The statement said Coleridge acknowledge that the church's response to the abuse scandal had been "too slow and too timid."

"Many bishops failed to listen, failed to believe, and failed to act," he was quoted as saying. "Those failures allowed some abusers to offend again and again, with tragic and sometimes fatal consequences."

The Catholic Church's response to the Royal Commission's recommendations, he said, is "a plan of action; it is our pledge to the Australian people; it is our promise of transparency and accountability."

The Royal Commission recommended that the bishops consult with the Holy See to clarify whether "information received from a child during the sacrament of reconciliation that they have been sexually abused is covered by the seal of confession" and whether "if a person confesses during the sacrament of reconciliation to perpetrating child sexual abuse, absolution can and should be withheld until they report themselves to civil authorities."

The commission also recommended that confession "only be conducted in an open space within the clear line of sight of another adult."

The response from the bishops and religious said dioceses would examine confessional spaces and practices. It said confessions of groups of children were normally conducted in the open and that the Catholic Professional Standards Limited it had established was developing standards and protocols.

"However, the 'seal of confession' is inviolable for the priest confessor," it said.

"Children will be less rather than more safe if mandatory reporting of confessions were required: the rare instance where a perpetrator or victim might have raised this in confession would be less likely to occur if confidence in the sacramental seal were undermined; and so an opportunity would be lost to encourage a perpetrator to self-report to civil authorities or victims to seek safety," said the response.

"Mandatory reporting of confessions would also be a violation of freedom of religious belief and worship," it added.

The bishops and religious noted that they had marked a few recommendations "For further consideration," and about a dozen that mentioned the Holy See had been noted to the Vatican. In October, leaders of the Australian Catholic Bishops Conference and the chair of the church's Truth, Justice and Healing Council met with Vatican officials to discuss issues emerging from the royal commission investigations.

For instance, the Royal Commission said the bishops should urge the Vatican to change canon law so that "the pontifical secret" -- the confidentiality surrounding a canonical investigation and process -- "does not apply to any aspect of allegations or canonical disciplinary processes relating to child sexual abuse." The response said the bishops had sought canonical advice and consulted with the Holy See, but noted that the pontifical secret "does not in any way inhibit a bishop or religious leader from reporting instances of child sexual abuse to civil authorities."

The Royal Commission asked that the bishops urge the Vatican to eliminate the "imputability test" of canon law when dealing with cases of clerical sexual abuse; the imputability test basically means that a person's level of guilt for a crime is lessened to the degree that he or she was not aware that the action was wrong; if the imputability is diminished, canon law would recommend a lesser penalty for the guilty.

In response to a recommendation that the bishops work with the Vatican to amend canon law to remove the time limit for commencement of canonical actions relating to child sexual abuse, the bishops said this was already the practice in Australia. According to rules issued in 2003, the statute of limitation is 20 years after the victim reaches the age of 18; however, church law also says that the Congregation for the Doctrine of the Faith can set aside that limit.

Several recommendations from the royal commission concerned celibacy -- the promise not to marry. The response said the bishops noted "that the Royal Commission made no finding of a causal connection between celibacy and child sexual abuse; that voluntary celibacy is a long-established and positive practice of the church in both East and West, particularly for bishops and religious life; and that inadequate initial and continuing formation of priests and religious for celibate living may have contributed to a heightened risk of child sexual abuse, but not celibacy as a state of life in and of itself."

In March, Pope Francis authorized an Australian plenary council, a meeting in which decisions become binding on the church in the country. The bishops said it was time to look at where the church in Australia was headed.