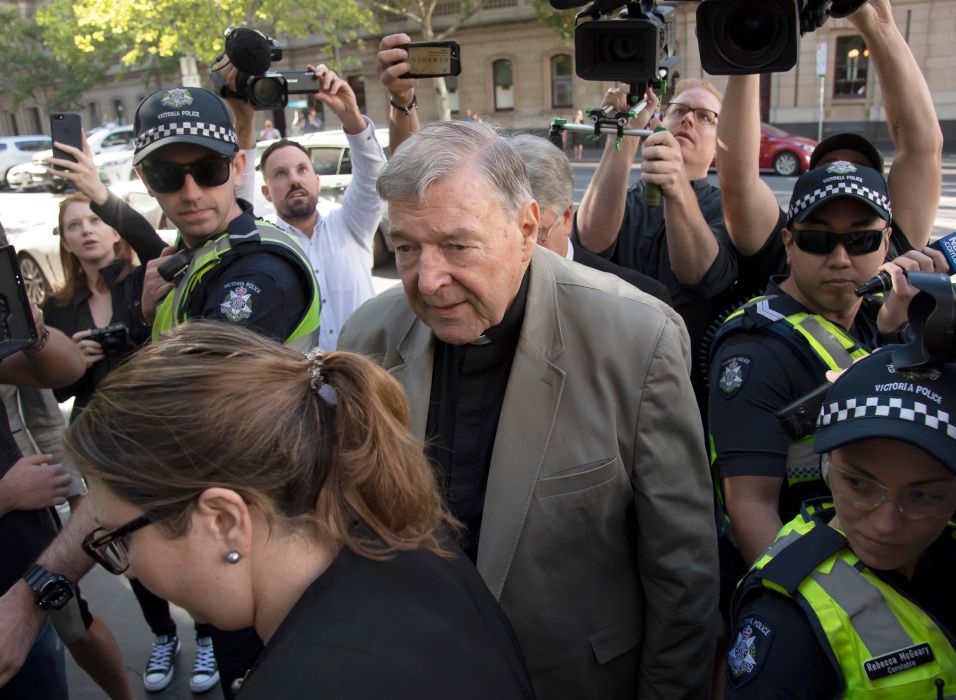 In this Feb. 27, 2019, file photo Cardinal George Pell arrives at the County Court in Melbourne, Australia. High-profile Australian journalists and large media organizations went on trial on Monday, Nov. 9, 2020, on charges that they breached a gag order on reporting about Cardinal George Pell's sex abuse convictions in 2018 that have since been overturned. (AP File/Andy Brownbill)

CANBERRA, Australia — High-profile Australian journalists and large media organizations went on trial on Nov. 9 on charges that they breached a gag order on reporting about Cardinal George Pell's sex abuse convictions in 2018 that have since been overturned.

A total of 18 individual journalists, editors and broadcasters face potential prison sentences and 12 media organizations face fines if they are found guilty in the Victoria state Supreme Court of breaching a judge's suppression order on Pell's case. They have all pleaded not guilty.

Justice John Dixon is hearing the trial without a jury and via video links due to pandemic restrictions. The trial is expected to take two to three weeks.

Such suppression orders are common in the Australian and British judicial systems. But the enormous international interest in an Australian criminal trial with global ramifications highlighted the difficulty in enforcing such orders in the digital age.

Pell was convicted on Dec. 11, 2018, of sexually abusing two choirboys in a Melbourne cathedral when he was the city's archbishop in the late 1990s.

The trial of Pope Francis' former finance minister and the most senior Catholic to be charged with child sex abuse was not reported in the news media because of a suppression order that forbade publication of details in any format that could be accessed from Australia.

Details were suppressed to prevent prejudicing jurors in a second child abuse trial that Pell was to face three months later.

That second trial was canceled due to a lack of evidence, and Australia's High Court in April overturned all convictions after Pell had spent 13 months in prison.

In opening her case, prosecutor Lisa De Ferrari told the judge that the morning after Pell's convictions, Australians could read about it on overseas websites, with U.S.-based The Daily Beast among the first to break the news.

No foreign news organization has been charged with breaching the suppression order. The U.S. Constitution's First Amendment would prevent such censorship in the United States, so attempting to extradite an American for breaching an Australian suppression order would be futile.

"The world is reading a very important story that is relevant to Victorians," the newspaper said, referring to residents of Victoria state.

The newspaper said it was prevented from "publishing details of this significant news."

"But trust us, it's a story you deserve to read," the newspaper said.

An online story that referenced overseas reporting led to the newspaper's owner and staff being charged. 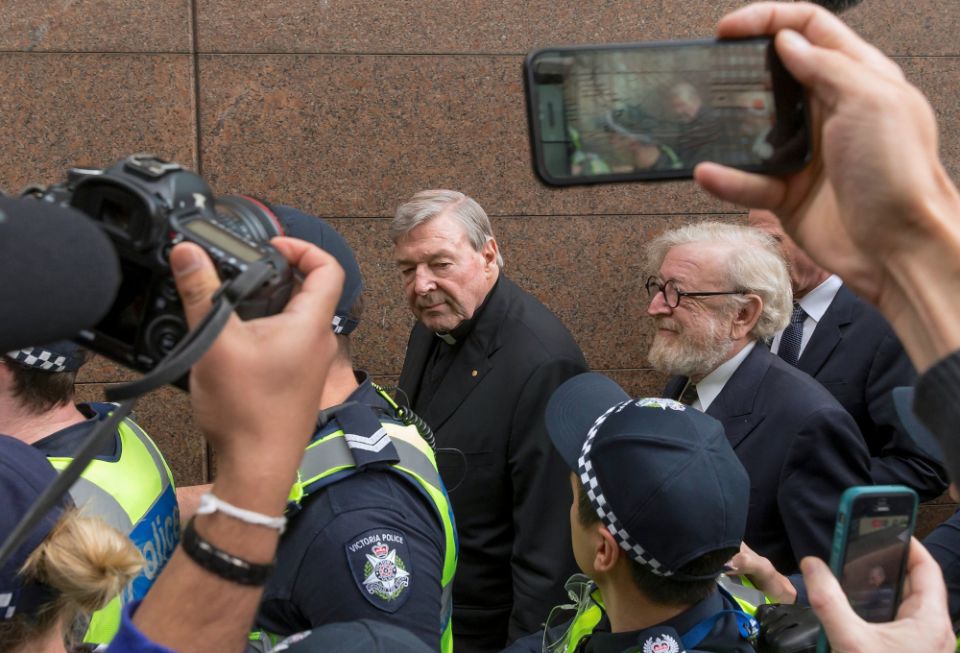 "A high-profile Australian known across the world has been convicted of a serious crime but the details cannot be published in any media in the country," the online report began, under the headline, "The story we can't report."

Sydney radio broadcaster Chris Smith, whom De Ferrari described as a "commentator rather than a journalist," referred to similar cryptic reports in Sydney newspapers during his morning program.

He's been charged for telling his audience that two of the top three results of Google searches for the "suppressed name" were websites that reported the crimes.

"I can't tell you who it is," Smith said. "But I can also encourage you to get on to Google and start asking these questions: high-profile Australian, worldwide reputation, conviction of an awful crime — and you'll find out who it is."

Alex Lavelle, a former editor of Melbourne's The Age newspaper, has been charged over an article that explained that a suppression order prevented his newspaper from reporting that "a high-profile figure" had been "convicted of a serious crime."

Prosecutors have tendered into evidence an email from senior The Age journalist Selma Milovanovic sent a day after Pell's conviction in which she urged Lavelle not to breach the suppression order.

She reminded him that the newspaper had "sat on convictions for years" of Melbourne serial killer Peter Dupas because of suppression orders.

Lavelle replied that he was "very sympathetic" to Milovanovic's view and that "there are valid arguments on both sides."

"I think one of the things that is different now is that the stories are everywhere and easily accessible, which was not the case with Dupas presumably," Lavelle wrote. "We are not breaching the suppression order, just explaining why we can't report on the story."

The media defendants have not said what their defense is to be in the court case. De Ferrari said some of the individuals charged had said they were not aware that a suppression order existed.

Some won't admit to writing contentious articles, relying on a privilege against self-incrimination. Prosecutors will have to prove their roles in publication.

The trial was adjourned until Nov. 10.