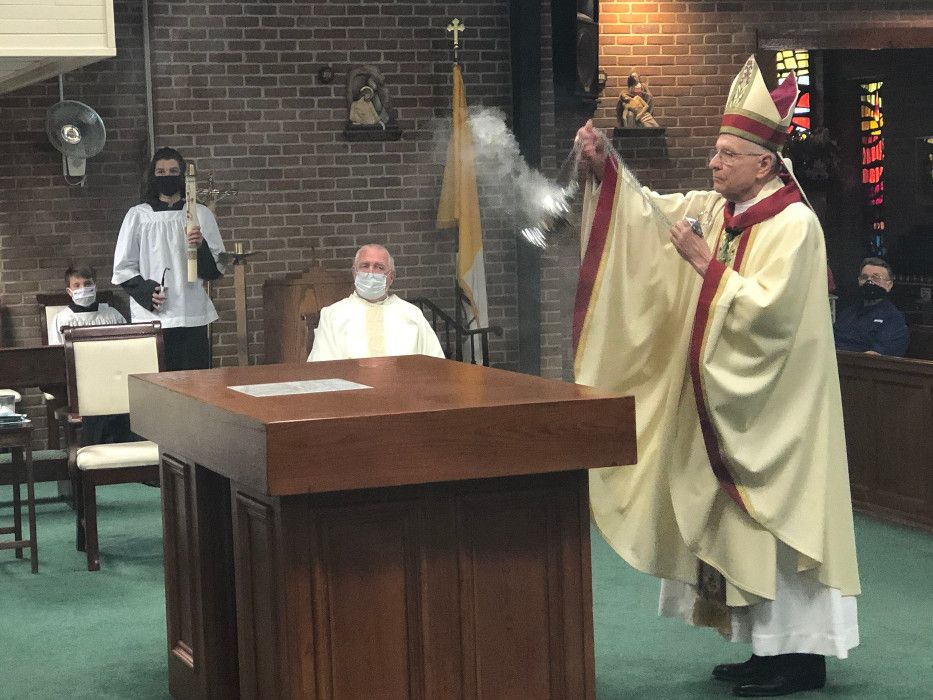 Pearl River, La. — In an act of solidarity with the 350 parishioners of Sts. Peter and Paul Church in Pearl River, a visibly upset New Orleans Archbishop Gregory M. Aymond celebrated Mass Oct. 10 for a second consecutive week for the parish and reconsecrated its church and its new altar.

The parish had learned a week before that its 13th pastor appointed in July 2019, Fr. Travis Clark, was arrested Sept. 30 for alleged obscenity with two women in their church.

Before he began celebrating Mass, Aymond reiterated to those present his shock and anger over what happened — calling Clark's behavior inside the church obscene. He said he knew the Sts. Peter and Paul parishioners were shocked and angry, too.

"The desecration of this church and altar is demonic, demonic," he said. "Let me be clear, there is no excuse for what took place here. It is sinful, and it is totally unacceptable. Travis has been unfaithful to his vocation; he's violated his commitment to celibacy; and also, he was using that which was holy to do demonic things.

Aymond encouraged parishioners to move forward and said God will move forward with them. He asked them not to judge the church or priesthood by the actions of a few priests.

"Let us continue to focus on the Lord Jesus and his mission and ministry here," he said, and then introduced them to Spiritan Fr. Carol Schirima, who was in residence at Our Lady of Lourdes Parish in Slidell, Louisiana, as the new shepherd and administrator of the parish.

Just the week before on Oct. 3, Aymond celebrated Mass at Sts. Peter and Paul and heard the feelings of disappointment, anger and surprise from parishioners who never expected their pastor — whom several said was personable and involved in the church — would let them down as he did.

"I came last week and asked for God's spirit to be in all the parishioners and in this place of worship, the church," Aymond said. "However, after hearing the details about what had happened, it was clear that there was desecration. In that case, the church requires that we consecrate the church and the altar."

Clark, 37, was booked Oct. 1 on obscenity charges, and the archdiocese removed him as pastor the same day. He is accused of engaging in sex acts with two women on a church altar, which is "clearly visible from the street," the police report said. The two women, identified as Melissa Cheng, 23, and Mindy Dixon, 41, were booked on the same count as the priest. 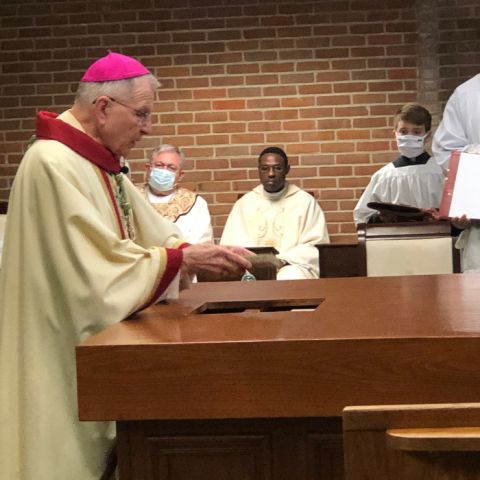 Also on Oct. 1, Fr. Patrick Wattigny, 52, disclosed his sexual abuse of a minor in 2013. The New Orleans Archdiocese immediately removed him as pastor of St. Luke the Evangelist Catholic Church in Slidell. Archdiocesan officials said law enforcement had been notified and the priest's name will be added to the archdiocese's clergy abuse report.

The previous wooden altar at of Sts. Peter and Paul Church was removed and burned Oct. 9 and replaced with a wooden altar from St. Francis de Sales Church in New Orleans, which closed in 2008.

At the Oct. 10 Mass, Aymond blessed the people and the church with holy water. He used chrism oil and incense to bless the new altar and place a relic of Sts. Peter and Paul inside the altar, representing the risen Christ in our midst.

"The church is a very holy place and when a church has been used for unholy things and has been desecrated, we must drive away the evil spirit ... and doing so we reconsecrate it to Christ," Aymond said.

"It means the altar is not to be used for anything other than the worship of God," said Betty-Ann Hickey, associate director of the archdiocesan Office of Worship. "It is really a sanctifying and setting apart, and means it is only for sacred use."

Parishioners were thankful that Aymond came to be with them during this trying time at Sts. Peter and Paul Church.

Cathy Downey, whose late husband, Pat, was a deacon, has been in the parish just shy of its founding 50 years ago. She said Sts. Peter and Paul parishioners are devoted to Jesus and are close-knit. In fact, the same night as the consecration, Downey was helping out with the parish's 50th-year celebration, which had been delayed because of COVID-19.

"It's like a church family," Downey told the Clarion Herald, newspaper of the New Orleans Archdiocese. "The parish is really upset, but this event shows how the parish comes together. We are not going to let the devil take over. With Aymond here and consecrating a new altar, we feel like the church is backing us up."

"We're glad that Aymond came here," Milczarek said. "He's not only blessing us but ministering to us and our community. ... The biggest thing is to have a new consecrated altar. ... The people will see that it is holy."

Aymond acknowledged that it's tough to be a Catholic today in the Archdiocese of New Orleans but said Catholics should remain steadfast in their belief in the church. There is a strong fraternity of good priests in the archdiocese who are equally upset and embarrassed as he is by recent events. He plans to meet with them in a few days to discuss what has happened.

"2020 has been a terrible year," Aymond said. "We have COVID, the reorganization of the diocese, financial challenges and now two priests who have been removed from the priesthood.

"I will discuss these things and others with the priests to be able to be in solidarity with their feeling of betrayal and to strive to move forward as we try to continue the ministry of Christ," he continued. "We will pray together and renew the promises of ordination for two reasons — it is appropriate, and secondly, we were not able to do it at the chrism Mass because of COVID."

Bordelon is associate editor of the Clarion Herald, newspaper of the Archdiocese of New Orleans.

No dispensation for this year's Christmas Mass on Monday