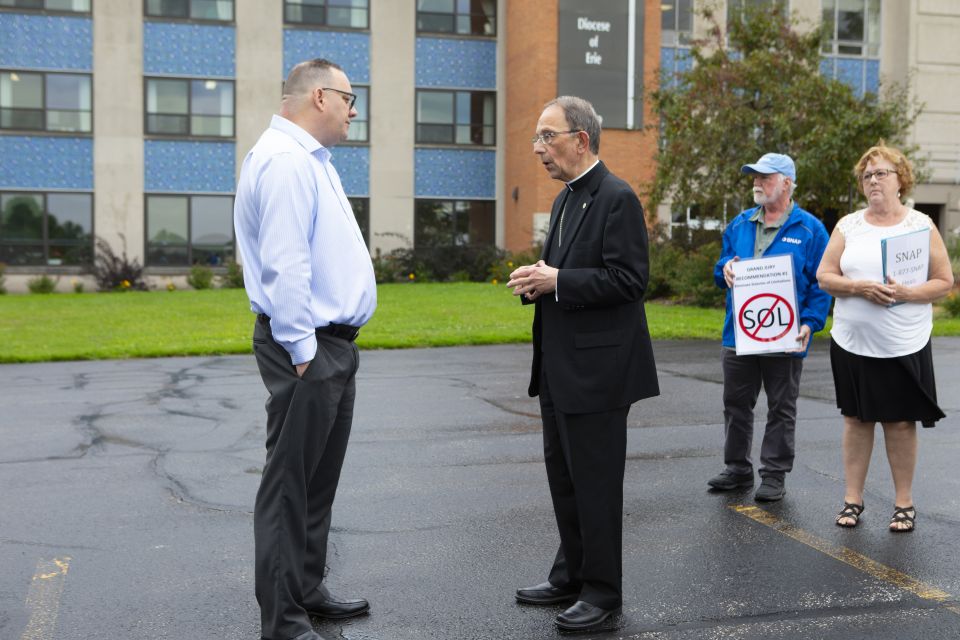 Bishop Lawrence Persico of Erie, Pa., speaks with Jim VanSickle of Pittsburgh, who told a Pennsylvania grand jury he was molested by a priest when he was a teenager in Bradford, Pa. The two men talked during an Aug. 21 news conference held in front of the Diocese of Erie's headquarters by members of the Survivors Network of those Abused by Priests, or SNAP. (CNS/Chaz Muth)

Washington — Bishops across the United States are offering apologies to victims, and renewed resolve to Catholics, in the wake of the Aug. 14 Pennsylvania grand jury report that detailed claims of sexual abuse of more than 1,000 children over 70 years in six dioceses in the state.

"The crimes attributed to the former Cardinal Theodore E. McCarrick and those named in the Pennsylvania grand jury report are unspeakable," said an Aug. 22 letter from Archbishop John Wester of Santa Fe, New Mexico.

"I am profoundly sorry for the pain and suffering endured by so many at the hands of the clergy whose crimes were enabled by a lack of transparency and a culture of self-preservation in the church. I apologize principally to the victims of clergy sexual abuse who not only endured unthinkable suffering as children, but who had to carry that burden throughout their lives," Wester added.

"Robbed of their innocence, wonder and awe, they grew up into an adulthood of loneliness and quiet desperation. Tragically, many felt compelled to end their suffering through suicide. I apologize to their families who either suffered along with their relatives, or who were unaware of why their loved ones were distant and despondent."

The Pennsylvania grand jury report is "devastating in the graphic detail of the sinful behavior of priests and the negligent response of bishops and church leaders to properly respond to victims," said and Aug. 17 letter from Alaska Archbishop Paul Etienne to Catholics in his archdiocese.

In reacting to the report, Archbishop Etienne, of Anchorage, referred to retired Archbishop Theodore McCarrick of Washington, who resigned from the College of Cardinals after a substantiated abuse claim was linked to him. "This report, so quickly on the heels of the revelations earlier this summer of similar misconduct by a cardinal of the church," he said, "has been deeply harmful to victims and their families, as well to you, the members of the church. ... If I were a parent reading this devastating news, my first concern would be for the well-being of my children."

In a letter to Catholics in his archdiocese dated Aug. 13, one day before the issuance of the Pennsylvania report, Archbishop Samuel Aquila of Denver said he was calling on his fellow U.S. bishops "to ask for and allow an independent investigation that includes members of the lay faithful and those clergy who had nothing to do with the matter. Since the oversight of bishops and cardinals falls under the jurisdiction of Rome, I humbly ask Pope Francis to conduct an independent investigation like he did in Chile."

"I add my voice to that of many other bishops, clergy, religious and laity -- encouraging greater reforms and transparency on the part of the global church," said an Aug. 21 letter by Bishop Mitchell Rozanski of Springfield, Mass., to Catholics in his diocese.

"Since arriving as your bishop four years ago, I have had the somber task of meeting with victims of abuse and their family members," he added. "While I cannot undo the great harm done to them, I can promise victims, their loved ones and the entire community that I remain firmly committed to rooting out this evil in our midst. The failure by any member of the clergy, religious or laity to strictly implement, as well as adhere to, our policies and guidelines will result in removal from ministry."

"Please know that I feel as you do," said Bishop Walker Nickless of Sioux City, Iowa, in a Aug. 21 letter to Catholics in his diocese. "I am disgusted by the horrible, soul-searing details of these crimes. I am filled with anger against those church leaders who allowed such men to persist in their actions, and who failed gravely in their responsibility by trying to hide these truths from everyone."

The grand jury report "serves as a kind of examination of conscience," Nickless said. "May we all, but especially we bishops, have the grace and humility to be truly contrite, and to resolve firmly to amend our ways and cling to our Savior, Jesus Christ, our only sure hope."

"The recent allegations of sexual abuse of children and vulnerable adults by Catholic clergy as revealed by a grand jury investigation in Pennsylvania are extremely disturbing," said an Aug. 16 statement by Archbishop Robert Carlson of St. Louis.

"Priests are called to be spiritual fathers to their people, and bishops are called to be shepherds of their flock, to protect the people in their care. We know that in many cases that has not happened. The trust of the faithful has been violated.

Bishop Daniel Jenky of Peoria, Illinois, said he was "truly saddened and deeply disturbed" by the Pennsylvania report. "These crimes harm the victims, weaken many people's faith, and hurt the entire church," he added.

"Christ is always the true head and shepherd of his flock and his grace alone is able to heal what is broken. I invite you to join me in offering prayers and asking for God's grace of healing, correction, and continued reform.

Bishop Edward Braxton of Belleville, Illinois, said this crisis "has led to profoundly painful experiences for everyone in the Catholic Church, but most importantly, in the lives of the abuse victims and their families. It has also had a significant impact on the morale of the majority of priests who are not guilty of such heinous offenses.

"As a result, growing numbers of Catholic people feel alienated from the Catholic Church which is, and should always be, the sacrament of the encounter with Jesus Christ," he said.

Bishop Robert Morlino of Madison, Wisconsin, pointed especially to the accusations of McCarrick's sexual improprieties with seminarians, saying they "have brought a whole slew of issues to light, long-ignored was the issue of abuse of his power for the sake of homosexual gratification." He said "a homosexual subculture within the hierarchy of the Catholic Church that is wreaking great devastation in the vineyard of the Lord."

"Right now there is a lot of justified anger and passion coming from many holy and faithful laypeople and clerics across the country, calling for real reform and 'house cleaning,'"  Morlino said. "I stand with them. I don't know yet how this will play out nationally or internationally. But I do know this … for the Diocese of Madison: 'As for me and my household, we will serve the Lord.''

Many bishops pointed to the work currently being done in their dioceses and dioceses nationwide to listen to victims and to stop sexual abuse before it has a chance to start.

Some declared specific dates and times for Catholics in their diocese to join in prayer and fasting on behalf of victims of clergy sexual misconduct.

Etienne invited Catholics to go to the Our Lady of Guadalupe Co-Cathedral in Anchorage Aug. 22 for Mass and eucharistic adoration, followed by benediction and a prayer service of penance and healing. "We will pray not only for the healing of all who are victims of sexual abuse, but also for the healing of the body of Christ, the church," he said.

Nickless offered Sept. 7 to "fast, at least on this day, from food, or from alcohol, or social media, or from whatever you need to so that you can grow in holiness." He also encouraged a novena to the Sacred Heart of Jesus and fasting on first Fridays from September through May 2019.

Wester offered Sept. 14, the feast of the Holy Cross, as "a day of prayer, atonement and reparation for the sins of those bishops and priests who either abused children or failed to protect them."

Aquila asked each priest in his archdiocese to offer a Mass each month "in reparation for the sins committed by cardinals, bishops, priests and deacons, and for all sins committed by clergy and laypeople against the commandments of our Lord, as well as to pray for healing for the victims of sin." He asked them also to publicize these Masses so laity can attend.

In an Aug. 23 letter, Bishop Thomas Tobin of Providence, Rhode Island, urged Catholics in the diocese to join him in a special day of prayer and penance Sept. 14 at the Cathedral of SS. Peter and Paul. He acknowledged "the anger, pain and confusion that many Catholics are experiencing over recent allegations of sexual abuse of minors by priests, and negligence of bishops in dealing with the crisis."

He said he will undertake a personal 24-hour fast from 8 a.m. the same day until 8 a.m. Sept. 15 "in penance for my own faults and failures as a Christian, priest and bishop, as well as for the sins and failures of all priests and bishops related to the sexual abuse of minors."