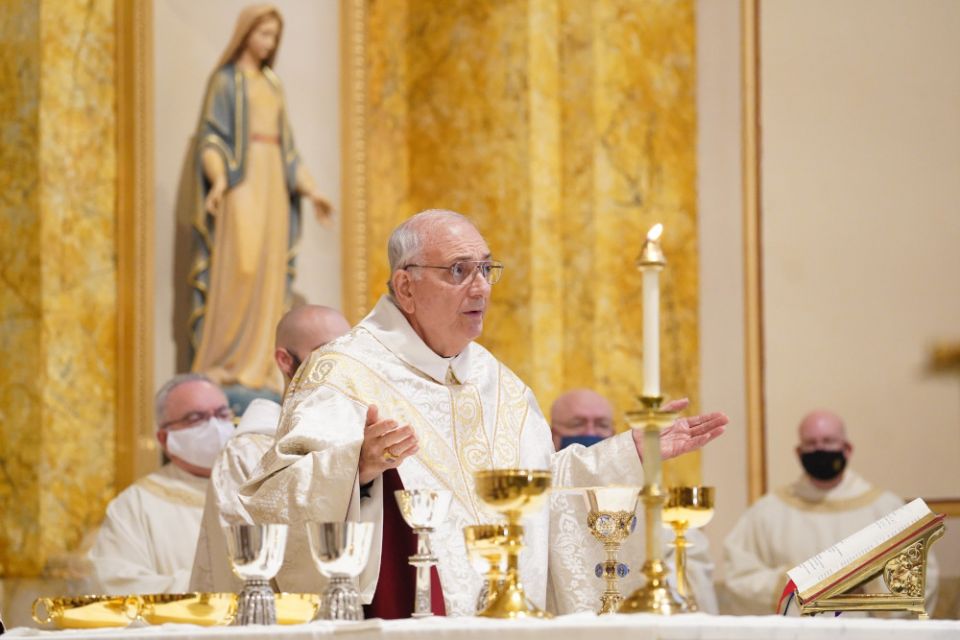 Brooklyn, N.Y. — Brooklyn Bishop Nicholas DiMarzio said Feb. 22 a lawsuit filed against him in New Jersey Superior Court over a claim of abuse that allegedly occurred decades ago "is defamatory."

"I did not abuse the accuser or anyone else in my 50-year ministry as a priest," he said, adding: "False claims do real damage to victims of sexual abuse."

According to a story in The Tablet, Brooklyn's diocesan newspaper the plaintiff is Samier Tadros, 47, who now lives in Daytona Beach, Florida.

He claims the abuse took place from 1978 to 1980 in Holy Rosary Church in the Archdiocese of Newark, New Jersey, the paper reported. "At the time, Bishop DiMarzio lived in the parish and, in court documents, Tadros contended that he was receiving one-on-one religious instruction from him."

DiMarzio said in his statement that the accuser "did not attend the parish or the parish school and does not appear to have been Catholic."

"Anyone with a minimal understanding of parish life knows that it stretches the imagination to think a priest would be providing private catechism lessons to a non-Catholic 6- or 7-year-old on a one-to-one basis," he said. "Additionally, I simply resided at the parish in question as I was assigned by the Archdiocese of Newark to minister full-time at Catholic Charities."

DiMarzio also said there is "nothing new" in the suit that is different from "the original letter of complaint" submitted to the Newark Archdiocese March 9, 2020. In the letter, the accuser sought $20 million.

According to a National Catholic Reporter story of June 4, 2020, Tadros' attorney, Mitchell Garabedian, told the paper that Tadros came forward after hearing from a family member that another man, Mark Matzek, had accused the bishop of abuse that supposedly occurred in the 1970s.

In November 2019, Matzek claimed then-Fr. DiMarzio abused him when he was 12 between 1974 and 1975, when the priest was assigned to St. Nicholas Church in Jersey City, New Jersey.

In a statement Nov. 13, 2019, DiMarzio denied the accusation, vowing to "vigorously defend" himself against the claim. Under new protocols concerning accusations against church higher-ups, the metropolitan archbishop, in this case Cardinal Timothy M. Dolan of New York, is charged with investigating any accusation made against another bishop in his region.

In January 2020, the Archdiocese of New York confirmed to Catholic News Service it had begun an investigation of the abuse claim. In a Jan. 21 statement from the Brooklyn Diocese, the bishop said he looked forward "to the investigation of the allegation made against him and having his good name cleared and restored."

Regarding the Tadros lawsuit in the Superior Court of New Jersey in Essex County, DiMarzio's attorney, Joseph A. Hayden Jr., said in a Feb. 22 statement that the allegations in the suit "never happened."

"When the letter of claim was first submitted to the Archdiocese of Newark last March, Bishop DiMarzio agreed to take a lie detector test on the two allegations that were made publicly against him," he said in a statement.

"Bishop DiMarzio was asked about both allegations [by Tadros and Matzek] separately. He denied both allegations separately," said Hayden, who is with a firm in Hackensack, New Jersey. "He was deemed truthful in his answers to both by an independent retired law-enforcement polygrapher of national stature.

"We will never settle this case because the allegation is untrue, and the bishop looks forward to trying this case before a jury of his peers," the attorney said. "A canonical investigation was conducted by an independent, prestigious law firm, which utilized the investigative services of former law enforcement officials under the direction of a former FBI director. The bishop met with the investigators and answered each and every question asked of him."

Hayden said a report on the investigation has been sent to Rome. "We are currently awaiting the findings," he added.

In releasing the statements from DiMarzio and Hayden, the Brooklyn Diocese said Feb. 22 that the bishop "is recognized as a leader in the fight against sexual abuse in the Catholic Church."

"He instituted changes since arriving at the Diocese of Brooklyn in 2003 that surpassed the mandates of the [U.S. bishops'] 2002 'Charter for the Protection of Children and Young People,'" the diocese said. "They include an independent reporting line, where reports are automatically sent to the district attorney in Brooklyn or Queens. He meets with victim-survivors of clergy sexual abuse and started the yearly 'Mass of Hope and Healing' to pray for them."

DiMarzio also was tasked by the Vatican with overseeing a probe concerning the handling of abuse cases in the Diocese of Buffalo, New York, where embattled Bishop Richard J. Malone ultimately stepped down in late 2019 following widespread criticism.