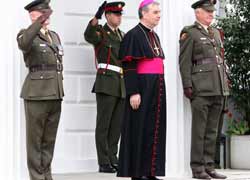 Archbishop Giuseppe Leanza was received in Dublin as papal nuncio to Ireland in 2008. (CNS)

VATICAN CITY -- In an exceptional move, the Vatican recalled its nuncio to Ireland so that he could participate in meetings aimed at drafting the Vatican's formal response to an Irish government report on clerical sex abuse.

Following the publication July 13 of the so-called Cloyne Report "and, particularly, after the reactions that followed, the secretary of state has recalled the apostolic nuncio in Ireland, Archbishop Giuseppe Leanza, for consultations," the Vatican said in a statement July 25.

Passionist Father Ciro Benedettini, vice director of the Vatican press office, said recalling the nuncio "denotes the seriousness of the situation, the desire of the Holy See to face it with objectivity and determination, as well as a certain note of surprise and disappointment over some excessive reactions" to the report and its accusations against the Vatican.

The Cloyne Report, which examined how the Diocese of Cloyne handled accusations of clerical sexual abuse, said the bishop paid "little or no attention" to child safeguarding as recently as 2008 and that he falsely told the government his diocese was reporting all allegations of abuse to the civil authorities.

The report also accused the Vatican of being "entirely unhelpful" to Irish bishops who wanted to implement stronger norms for dealing with accusations and protecting children.

Addressing parliament July 20, Irish Prime Minister Enda Kenny said the Cloyne Report "exposes an attempt by the Holy See to frustrate an inquiry in a sovereign, democratic republic as little as three years ago."

"And in doing so, the Cloyne Report excavates the dysfunction, disconnection, elitism and the narcissism that dominate the culture of the Vatican to this day," the prime minister said.

After the prime minister spoke, Jesuit Father Federico Lombardi, Vatican spokesman, issued a statement calling for greater objectivity in discussing "topics so dramatic" because the first concern of all should be "the safeguarding of children and of young people and the renewal of a climate of trust and collaboration" between church and state.

In announcing the recall of the nuncio, Father Benedettini said the Vatican Secretariat of State wanted to ensure its response to the Cloyne Report was serious and complete, and to do that it was necessary that "the person on the scene," Archbishop Leanza, take part in drafting discussions along with officials from the congregations for the doctrine of the faith, religious, clergy and bishops.

He said the Vatican expects to forward its formal response to the Irish government before the end of August.

In a statement July 25, Irish Foreign Minister Eamon Gilmore said, "The decision to recall the papal nuncio to the Vatican for consultations is a matter for the Holy See. The government is awaiting the response of the Holy See to the recent report into the Catholic Diocese of Cloyne and it is to be expected that the Vatican would wish to consult in depth with the nuncio on its response."

A day earlier, Kenny told a crowd during a visit to County Donegal he had received "thousands of messages from around the world" supporting his comments.

"The numbers of members of the clergy who have been in touch in the last few days, to say it is about time somebody spoke out about these matters in a situation like you are, has astounded me," Kenny added.

"I have haven't made any other comments except to say that we await the response from the Vatican," he said.

[Contributing to this story was Michael Kelly in Dublin. ]