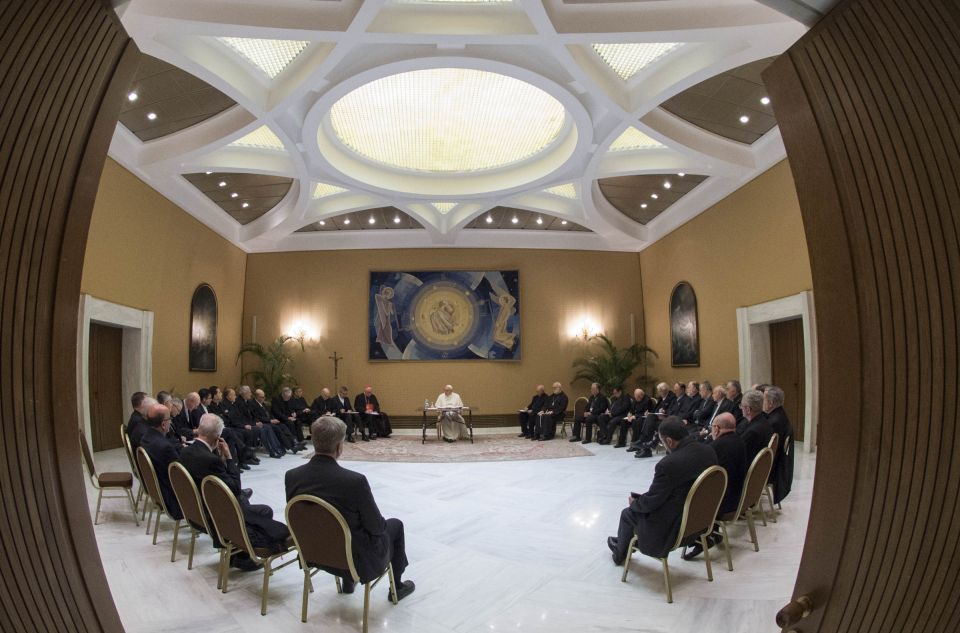 Pope Francis and 34 Chilean bishops met on May 15 to discuss the clerical sexual abuse crisis in Chile. (CNS photo/Vatican Media)

Only twice in history has a pope asked for the resignation of an entire episcopate: Last week, when the entire episcopate of Chile offered their resignations to the pope, and in 1802, when Pope Pius VII removed both the orthodox, validly installed bishops of France and the rival slate of schismatic bishops never recognized by Rome and installed by the revolutionary regime. In 1945, seven bishops who had collaborated with the fascist Vichy regime were sacked.

Covering up the sexual abuse of children, therefore, has now joined collaborating with Robespierre or Hitler as one of the things that forces a pope to take the extraordinary step of removing a bishop from office. In all three instances, the hierarchy earned the odium plebis, the hatred of the people, which warranted their removal. They had proved themselves to be not shepherds but wolves, or wolf-helpers.

In the Gospel of Luke we read: "Jesus said to His disciples, 'It is inevitable that stumbling blocks will come, but woe to the one through whom they come! It would be better for him to have a millstone hung around his neck and to be thrown into the sea than to cause one of these little ones to stumble.' " The Holy Father's scorching commentary on the behavior of the Chilean bishops resonates with this kind of fervor. It is a pastoral fervor, to be sure, whipped into righteous indignation.

I do not share the desire that the pope accept all the resignations he was just offered, but I understand why so many sex abuse victims and victims' advocates entertain that desire. Fr James O'Connell told NCR, "If it's an attempt by all the bishops to just be a team together, then it'd be so impractical that the pope cannot really accept all of those resignations," worrying that the mass resignation might be a kind of "ploy."

It is true that bishops and clergy, like members of the military, share a corporate sense of identity that the rest of us only experience in our families. That corporate identity makes it appropriate for the bishops to tender their resignations as a body. We do not know which bishops, if any, spoke up about the group's apparent indifference to the suffering of the victims. We do not know which bishops were guilty of covering up incidents of abuse and which were not. I hope the pope is not afraid to draw the important distinctions that need to be made in deciding which bishops should stay at their post because they truly did no wrong and raised their voices in fraternal correction, which bishops should retire quietly, which seems the appropriate penalty for bishops who did not cover up abuse but said nothing when others did, and which bishops should face yet stiffer penalties, those who actively participated in the cover-up.

The Holy See knows that it possesses, in the person of Archbishop Charles Scicluna, an invaluable investigator whose commitment to ferreting out the truth is ferocious. But, the Vatican must also recognize that Scicluna is not a systemic solution. The Holy See could profit from looking at the systematic response the United States Conference of Catholic Bishops took to the sex abuse crisis in 2002, the strengths of that response and the ways it remained deficient.

The principal deficiency of the U.S. bishops' response was cultural and canonical: The bishops had no mechanism for holding each other accountable. As we now know, some bishops refused to confront the crisis in their midst, yet only the pope could force such bishops from office. Bishop Robert Finn, formerly of the Diocese of Kansas City-St. Joseph, Missouri, and Archbishop John Nienstedt, formerly of the Archdiocese of St. Paul-Minneapolis, were both removed from office by the Vatican because of their mishandling of clergy sex abuse. But there remains no clear process — and indeed no clear authority — to assess charges of episcopal malfeasance or negligence.

The Commission for the Protection of Minors, established by Pope Francis in 2014, and led by Boston's Cardinal Sean O'Malley, has no competence or authority to hold bishops accountable — or to deal with individual cases of sex abuse. They are charged with educating bishops' conferences, and through them the entire church, on best practices to prevent abuse and to handle cases that arise. It is an advisory body, not a juridical one.

In 2015, there was an effort to create a new "juridical section" of the Congregation for the Doctrine of the Faith that would focus on episcopal accountability. But the different dicasteries never came to agreement and, instead, the dicasteries involved in selecting bishops were assigned the task of evaluating accountability issues. It is an unhappy solution: To find a prelate guilty of negligence or worse, the relevant Vatican office must admit that it made a mistake in selecting that person to become a bishop in the first place. If you are familiar with the culture of the Vatican, you know that they worry excessively about the bella figura of their departments and are loathe to admit a mistake.

It is time to bring back the original 2015 proposal for a specific body charged with hearing cases of episcopal negligence or malfeasance regarding clergy sex abuse. Perhaps when the Council of Cardinals completes its task of reshaping the Roman Curia, they could take on that role, assisted by a permanent staff. It is a grave responsibility and deeply distasteful. Regular police officers are not great fans of the "internal affairs" divisions that investigate fellow cops. But someone has to do it because, as noted, corporate identity has a downside as well as an upside.

The millstone of bishops' looking the other way, shuffling pedophiles from parish to parish, of hearing the news of another scandal and thinking "poor Father," is now, finally, being untied from the neck of the church. Pope Benedict XVI started the process and some were frankly worried Pope Francis, with his keen attention to mercy, might backslide. Instead, he has gone further than Benedict did.  The pope has recognized that there is nothing merciful about putting perpetrators in a situation in which they can commit these horrible crimes again, and that accountability for bishops in these cases requires him to leave the mercy to God.

Bishops discuss hotline devoted to collecting complaints against them