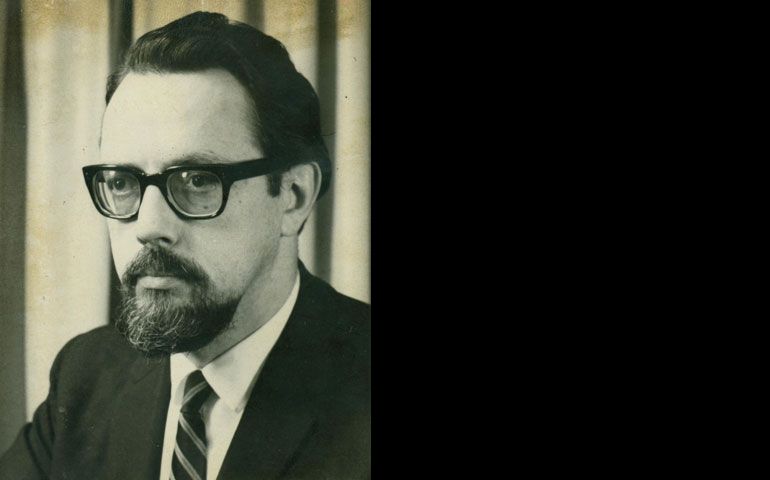 John Howard Yoder in 1971: It has been tempting to scour Yoder's work for something that explains his actions, as if the cause of his violence was bad theology. (Mennonite Church USA Archives/Mennonite Publishing House)

Over the course of his acclaimed career, Christian theologian and ethicist John Howard Yoder (1927-97) stalked, harassed and sexually assaulted more than a hundred women. This has been an open secret among academics for decades -- whispered in conference hallways and traded as gossip among graduate students, but almost never addressed in public.

Today, thanks to the hard work of many activists and scholars, Yoder's violence is being named and lamented much more openly and widely, and more attention given to strategies for resisting sexualized violence.

Yoder's story has been reported by a variety of media outlets many times over the past couple of years, including the June 19-July 2, 2015, edition of NCR. Beginning in the 1970s, Yoder undertook a series of what he presented as "experiments" in Christian sexual ethics. Those experiments, ostensibly designed to develop a fuller affirmation of the sexuality of single women, provided Yoder a pretext for a number of predatory behaviors.

He carried on sexually explicit correspondence with women across the globe, volunteering descriptions of his own body and his fantasies about theirs. He goaded women to touch him, or allow him to touch them -- up to and including genital contact. He pursued women even when they asked him to stop, sometimes even coming uninvited to their homes.

This behavior eventually led to Yoder's termination at the Mennonite seminary where he taught until 1984, and to a disciplinary process in the Indiana-Michigan Mennonite Conference from 1992 to 1994.

He continued, however, to teach at the University of Notre Dame, and his academic career flourished until his death in 1997.

Until recently, Yoder's actions were known only from a few published anecdotes and terse church documents that were circulated around the time of his disciplinary process. That so little was known made his violence easier to dismiss or ignore.

Beginning in 2013, a groundswell of energy around the theological and ethical issues connected with Yoder's violence arose among activists, educators, and church officials, radiating first from the feminist blogosphere.

Out of a conviction that Yoder's case had not been handled well initially and continued to haunt us in myriad ways, people began again to ask, with Eastern Mennonite University faculty member Barbra Graber, "What's to be done about John Howard Yoder?"

In 2014, responding to feminist questioning and organizing, the Mennonite Church USA commissioned historian Rachel Waltner Goossen to write a history of Yoder's offenses and Mennonite responses to them. Goossen's meticulously researched article, drawing from disciplinary records as well as interviews with Yoder's victims, colleagues and administrators, not only confirmed the veracity of the claims, but also expanded our sense of its scope.

The scholarly conversation about Yoder has been decisively transformed as a result of this renewed attention. Two years ago, Yoder's history of violence went largely unmentioned in academic treatments of his theology. It was considered bad form to say more. Today, however, it is impossible not to say more.

Many scholars with an investment in the Mennonite tradition or in Yoder's work, like Gerald Schlabach, Malinda Berry, Paul Martens and Tobias Winright, have weighed in thoughtfully in the popular media.

More formal academic reflections have also begun to appear in the Mennonite press. Karen Guth brought the question to scholars beyond the Mennonite world with an essay published by The Society of Christian Ethics in 2015.

This is all a very good thing. Veiling his violence behind professional accolades, psychological speculation, and stories of Yoder's kinder side, as academics and administrators have done for many years, is bad for everyone involved.

The silence was bad for Yoder, who needed to be held accountable by his colleagues. The silence has done harm at the institutions at which Yoder served, which failed then and continue to fail to deal adequately with cases of sexual harassment and assault perpetrated by their members.

Most importantly, the silence has minimized the pain Yoder caused his victims. They deserve not only our clear-eyed acknowledgment, but our sympathetic anger.

None of these problems is solved by the mere fact of talking about it. But openly acknowledging and lamenting violence committed among us can only be for the good.

While we welcome these developments, the substance of these scholarly conversations has not always been productive. Most of the academic conversation so far has been preoccupied with a narrower permutation of Graber's question: What's to be done with Yoder's writing? Should theologians and ethicists continue to study and teach his texts? And if we do, what difference should his history of violence make for the way we interpret them?

These can be important questions, particularly for those of us who have already been working with Yoder's ideas for a long time and need to decide how to move forward. But these questions can also distract us from more important issues.

It has been tempting to scour Yoder's work for something that explains his actions, as if the cause of his violence was bad theology. The unspoken hope, it seems to us, is that if scholars can identify and eliminate the problematic elements of Yoder's thought, we can hold onto the rest with a clear conscience. But the ideas that get singled out as problematic usually say more about us than they do about Yoder.

People have fixated, for example, on his essays on sexuality. Certainly, Yoder's sexual ethics deserve scrutiny. But focusing on his sexual ethics (a relatively insignificant part of his intellectual work) misses the real problem.

Yoder's actions were not the result of a failure to give due credit to the institution of marriage, or a consequence of his conviction that there are legitimate ways for unmarried people to express their sexuality. Sexual harassment and assault are not misplaced or badly expressed forms of desire. They are forms of violence.

Yoder made his most important intellectual contributions in the theology of violence and nonviolence. He eloquently defended a social ethic rooted in patience and servanthood rather than responsibility and control. But, in retrospect, many of his writings appear strikingly insensitive to the more complex operations of power, and so too the more complex operations of violence.

Yoderians should be asking: How might we revise Yoder's theology to account adequately for the kinds of violence he himself perpetrated?

Yet this question only takes us so far. Scholars will not be able to understand or address Yoder's violence just by reading more Yoder, even by reading him "critically." Immanent critique cannot be the only tool in our toolbox.

We need to engage with alternative modes of analysis. Others -- feminists and womanists, psychologists and sociologists, clinicians and pastors and activists -- have been working to understand and combat sexualized violence for a long time. We need to engage them more, and Yoder less.

Scholars are still too focused on Yoder as a knowledge producer, instead of on the structures and cultures that enabled Yoder's violence to continue. Rather than fixating on Yoder, we must listen to the survivors of his violence and with them learn to confront the features of patriarchy that enable and mask sexualized violence.

Turning to structural questions involves confronting the institutions, ecclesial and academic, that were complicit in Yoder's violence. Advocates of Yoder's victims have been making this point since at least 1983.

Anabaptist Mennonite Biblical Seminary and the Mennonite Church USA have been doing significant work that others could learn from. In 2012, seminary administrators convened an open dialogue between faculty and students about how to use Yoder's writing in the classroom. Seminary president Sara Wenger Shenk later issued a public apology for the institution's failure to respond adequately to reports of Yoder's violence when it was happening. The seminary also held a service of lament and listening in 2015.

The Mennonite Church USA initiated a discernment process in 2013 about how best to respond at the denominational level to Yoder's abuse. Carolyn Holderread Heggen, a clinician specializing in trauma and longtime victims' advocate, advised the process, which included commissioning Goossen's historical work, as well as making many historical resources relating to Yoder's case publicly available.

Whereas Notre Dame's response to Graber's question has been "It's a personnel issue," academics' response has been immanent critique. To different degrees, both are insufficient. What is required is a public, structural inquiry.

Theologians and ethicists interested in working with Yoder's ideas have a responsibility to analyze the institutional cultures, policies and structures that enable sexualized violence. In order to do so, they must learn from discourses beyond Yoder.

Institutions, such as the University of Notre Dame, that promoted Yoder's career have a responsibility to make a transparent investigation into how Yoder was enabled to continue his predatory behavior while he was a faculty member.

[Brian Hamilton is assistant professor of religion at Florida Southern College. Kyle Lambelet is a doctoral candidate in moral theology and peace studies at the University of Notre Dame.]

Editorial: Step up pressure on candidates to act on climate