Former altar boy at center of Kansas City lawsuit: 'My case turned into a cause' 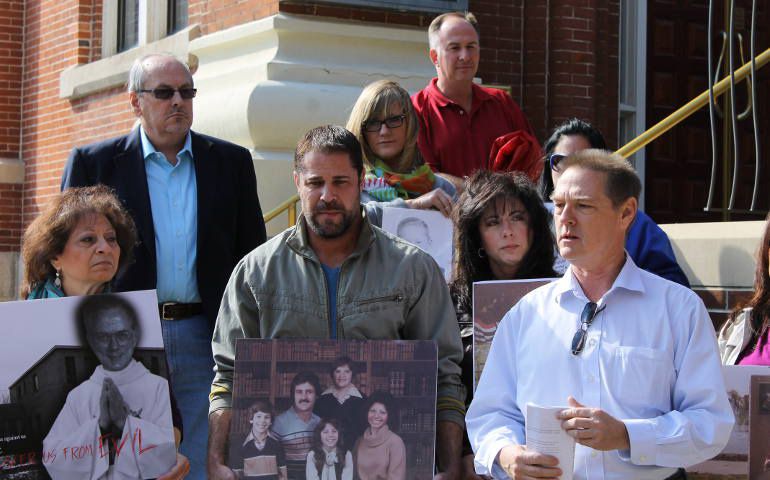 Jon David Couzens, center, holds a family photo from his childhood during a press conference Friday outside the Cathedral of the Immaculate Conception in Kansas City, Mo. (NCR photo/Brian Roewe)

Kansas City, Mo. — Speaking publicly for the first time since his clergy sex abuse trial against the Kansas City-St. Joseph, Mo., diocese ended prematurely because of a global settlement, Jon David Couzens said he intends to remain a voice for the protection of children.

"My case turned into a cause, and my cause is for all these children, and I'm going to keep moving forward," he said at a press conference in the shadow of the gold dome of the Cathedral of the Immaculate Conception in downtown Kansas City.

Late Tuesday, the diocese agreed to pay $9.95 million to settle 30 historical cases alleging clergy sexual abuse of minors, including the Couzens case -- the first case for the diocese to reach the trial stage.

Two days later, several of the claimants in the settlement announced at a press conference outside the chancery offices, a few blocks north of the cathedral, that they had agreed to share the funds with three others whose cases were not formally part of the deal.

Surrounded by more than a dozen family members, friends, and other claimants to the settlement -- many of whom attended the trial -- Couzens said while the general public may see money as his motivation and that of other victims of clergy sex abuse, "it's just the reverse."

"It's about money for [the diocese], because they think that they can pay these victims off and then they keep shut.

"They messed with the wrong victim, because I'm not going to shut up. There's no amount of money that they could have put on the table that Jon David Couzens would have said, 'I'll take it and you can shut me up,' " he said.

Couzens described the 11-day trial as "brutal" and said he found it difficult at times to keep his composure. He told NCR that outside of his own testimony, which covered parts of two days, seeing his life on display for the jury and spectators on the courtroom projection screen was one of the most difficult aspects of the trial.

"The other aspect that was difficult was sitting there and have my attorney read the depositions and how I was treated in the depositions, because I had five depositions within one year, and they rape you all over again," he said.

Looking ahead, Couzens said he has "some healing to do, and I have some acceptance to do." He said he is still in the process of absorbing the trial and piecing his life back together. A plumber before the trial, he said it's still up in the air if he will return to that profession.

"But then I knew when the offer was on the table that I had to do the right thing and do the smart thing, not only just for me, but I also had [29] other victims in the shadows that I kind of had to take into consideration," he said, adding that it was a joint decision.

For David Tate, one of 30 included in the settlement, the conclusion of three years of litigation was "a happy day of sorts," but he said there's still a lot that needs to be done.

"This does bring some closure to a bit, but Jon David mentioned earlier about the money -- it's not about the money, it's about the diocese being held accountable for all that's been going on," he said.

An action that would signal accountability to him would be a program outlining what the diocese intends to do to prevent abuse of minors in the future. Another would be the removal of Bishop Robert Finn from his post.

Tate attended a portion of Couzens' trial, as did Michael Hunter, another claimant to the settlement, who called the case, even without a jury decision, "historic."

"Many of us have waited 25, 30 years to see at least one of these priests come to justice ... it had meant so much to us to see due process," he said Thursday at the press conference.

Accountability | Former altar boy at center of Kansas City lawsuit: 'My case turned into a cause'

Vatican was not ordered to appear before U.N. committee, spokesman says

Return of Guam archbishop would be disastrous, says coadjutor